At about 10:30 this morning, I zipped off to the Saturday farmers market downtown to buy some honey. I arrived home at nearly 5:00PM. The market closes at noon. What happened to the missing five hours you wonder? Read on.

I had planned to get home quickly. I wanted to finish the blog entry below, and I had other work to do. I picked up a jar of honey and started home. Suddenly, the car died. The engine just stopped. It started up briefly a moment later, allowing me to drive a few hundred feet more, then died completely. The battery light came on and I had to coast to a stop on Sonoma Ave.--in a no parking zone, right in front of the main police station. Santa Rosa's main fire station is right next door. "If the car spontaneously combusts, I'm in good shape," I thought to myself. (Actually, that's a lie, but it sounded good, so I threw it in there.)
When it became apparent that I'd have to wait three hours for a tow, I decided to make the best of things. I walked downtown (a few blocks), got a sandwich and a cup of coffee at the kosher deli on 4th St. (I didn't know Santa Rosa had a kosher deli, but there it was. Great.) Afterwards I walked around town, looked in the bookstores, stopped by the library, and spent a few minutes watching the people that were people-watching from the chairs in front of Peet's Coffee. After leaving the car for repair on Monday, I finally made it home (thanks Mom) with not only a jar of honey but also a book (The Girl with the Pearl Earring) and a couple of musical scores bought cheap at the used bookstore. I even had an interesting conversation with the tow truck driver--comparing notes on the trials associated with restoring and running old cars and motorcycles.
Not a wasted day, just not the day I had planned.
I bought honey today for the first time in eight years. Because I keep bees, I'm not used to paying for honey, but I just hived a new swarm last spring after losing the colony that I had going, and I judged the brand new colony too weak to take honey from this past fall. We just used up the last from the harvest of the year before. Honey has gotten remarkably expensive in the interim. I almost balked, but decided to look at it as support for the local beekeepers at the market that often give me free advice.
Posted by Colin Talcroft at 5:44 PM No comments: 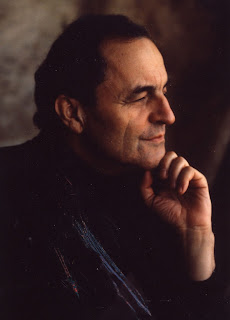 Heard an interesting SF Symphony concert this evening. Charles Dutoit conducted. The program was Debussy's Prelude to The Afternoon of a Faun, Stravinsky's Symphony in C, and Rimsky-Korsakov's Scheherezade.

Photo of Charles Dutoit used with permission, courtesy of the San Francisco Symphony Orchestra.
Posted by Colin Talcroft at 12:16 AM No comments:

Courtesy rarely costs much more than a little time; but time more than anything is what people seem to have too little of.
Posted by Colin Talcroft at 9:09 PM No comments:

Miscellaneous: To Friend or Not to Friend?

That is the question. Or, the question may be whether or not to unfriend. Sometimes the problem involves a decision about refriending--or being refriended. How long will it take for these words to appear in dictionaries?

I got to wondering recently about social networking etiquette. Knowing the Internet, there are Emily Post-style guides out there, but I prefer to muse in ignorance for the time being.
I'm not the social networking type, really. I'm the sort that is, for the most part, quite happy all alone--reading, planting things, making wine, drinking wine, listening to music, driving in the California sunshine--I'm more than capable of keeping myself amused in solitude for long periods of time. Despite that (because of that?) I'm always the last person to leave a party. A party is a kind of story. I like to know how things turn out--not that I go to many parties these days.... I guess I hate unfinished stories.
Having said all that, I recently joined Facebook. Why? mostly because an old friend from college in St. Louis asked me if I was a member. I got curious. Also, I had reason to believe I might find other old acquaintances there that I knew had joined recently. My biggest disappointment has been that you have to be officially connected with someone through the site beforehand to see their profile. You have to friend them or have been friended by them (there's a great example of a verb form for a grammar textbook--to have been friended--sounds oddly Shakespearean, too). On one level that makes the whole thing seem pointless, but I've decided it makes sense if you just understand that Facebook is intended more to allow friends to stay in touch, than as a tool for making new friends, and for that it seems to work well enough. I hate to admit it, but I've enjoyed my foray into social networking.
But, back to etiquette. What if I have a "friend" that I  want to unfriend--someone I friended just to be polite? Oh dear. Do I tell him? Do I explain? Do I say nothing--silently unfriend him? Will he get a notification? Will I simply disappear from his friends list? I don't know, but I don't want to be rude. If I do unfriend him, will he try to refriend me, assuming my unfriendly behavior was a mistake? Then what do I do? Despite the facelessness of much of the communication on Facebook, we are social beings; the usual considerations of people's feelings seem to come into play. Perhaps countless unwanted Facebook friends just sit in other people's lists, unloved but somehow inviolate--like the pair of gaudy goblets in the garage that can't be thrown away because they were a present from a sister. Is there sympathy friending? In looking up old friends, I have come upon strangers with no friends at all, which seems sad. And what about people you want to friend, but feel you can't for some reason or other? How do you tell them how you feel? These are small mysteries.
Posted by Colin Talcroft at 7:21 PM No comments:

Heavy rain today. It's really pouring. The first real rain we've had all season. Out and about doing errands today, the relief is palpable. People in the grocery store, the woman that cuts my hair, the man at the post office, the woman at the bank--all mentioned the rain and made a point of NOT complaining about the weather.
Posted by Colin Talcroft at 1:29 PM No comments: