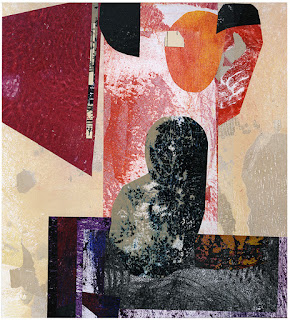 A new collage. This one draws on a batch of new monoprints in warm tones ranging from cream to raspberry red.

Click on the image for a larger view. For more of my collage work, visit my collage site at http://ctalcroft.wix.com/collage-site.
Posted by Colin Talcroft at 11:55 AM No comments:

I was saddened to see that Mary Tyler Moore died today. She gets a lot of credit for the role model she became as Mary Richards in The Mary Tyler Moore Show, but I'll alway remember her as Laura Petrie.
Posted by Colin Talcroft at 12:38 PM No comments: 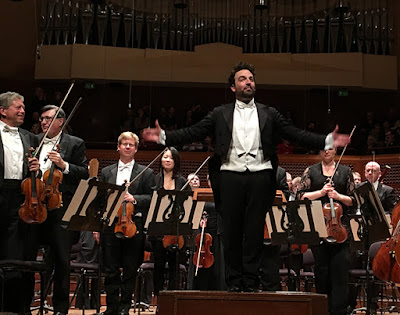 I attended the January 20 performance of the San Francisco Symphony at Davies Symphony Hall. James Gaffigan was back as a guest conductor (he served as the Symphony's Asseciate Conductor from 2006 to 2009). On the program was Mussorgsky's Night on Bald Mountain, Prokofiev's Violin Concerto No. 2, with Simone Lamsma as soloist, Mozart's Symphony No. 36, and Richard Strauss's "Dance of the Seven Veils", from Salome. 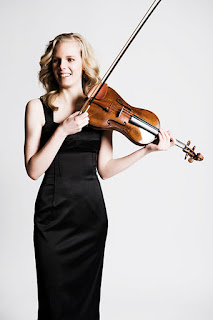 It was an oddly uneven evening. The Prokofiev seemed awkward, the soloist's playing a bit tentative, the whole not really gelled. I have never heard or even heard of Lamsma before. She was certainly competent, but seemed to lack fire, which was a disappointment as this concerto is among my favorites. According to the program notes, Lamsma plays the 1718 Mylnarski Stradivarius, on loan from an anonymous source. I thought it sounded rather dark and muddy as Stradivarius violins go, although 1718 is within the period usually said to have produced his best instruments (1700-1720).

It was fun to see Gaffigan again after several years. He's matured and gained some weight, which accentuates his short stature (something I hadn't noticed before), and that was exaggerated by Lamsma's presence; she is very tall and thin (standing on the podium he was only a trifle taller than her standing on the stage)--not that appearances really matter. Gaffigan and the Symphony handled the rest of the program very well, I thought, giving us spirited versions of the other three pieces, none of which had any of the awkwardness that seemed a problem with the Prokofiev.

Photo of James Gaffigan by the author. Photo of Simone Lamsma by Otto van den Toorn, courtesy of the San Francisco Symphony website.
Posted by Colin Talcroft at 8:20 PM No comments:

More rain last night left another 0.50 inches of rain in the rain gauge this morning, Monday, January 23, 2017. That brings our total for the 2016-2017 rain year to 33.45 inches at my location. Considering that average annual rainfall has historically been about 36 inches in Santa Rosa, that means we've had nearly a full year of rain now with another eight months left in the rain year and at least another two months during which we're likely to have more rain (the rain year runs from October 1 to September 30 of the following year, but most of our rain comes between the months of November and February).

[Another 0.1 inches fell after I wrote the above, so we are at 33.55 inches. The sky is clear now and no rain is forecast until early next week.]
Posted by Colin Talcroft at 12:40 PM No comments: