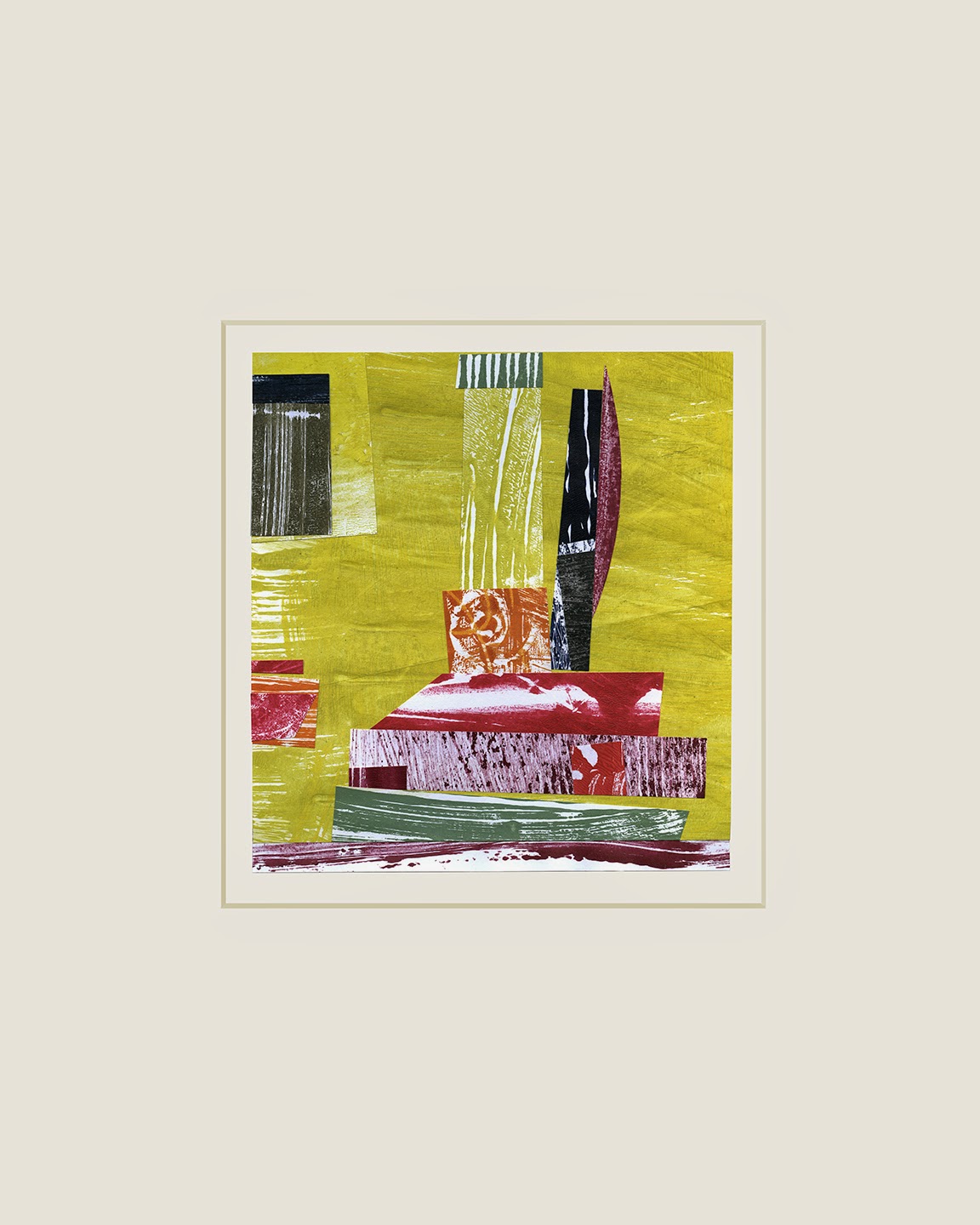 Chartreuse is one of those love-it-or-hate-it colors. It's not a favorite of mine, but, having made some chartreuse paper recently, I started playing with shapes and colors and I developed a composition against a chartreuse background that I rather like. I used bright, sharply contrasting colors--magenta, red, burnt orange--to set off the yellow-green. Untitled Collage No. 77 (Santa Rosa) was born. Visit my studio this coming weekend to see the original (which is rather more subtly colored than the photo here suggests).

Sonoma County Art Trails 2014 continues next weekend (October 18 and 19). My studio is No. 125. I'm also showing photography and printmaking.

Click on the images for larger views. For more, use the Art I'm Making tab to the right or visit my collage website at http://ctalcroft.wix.com/collage-site/ (requires Flash Player).
Posted by Colin Talcroft at 11:18 AM No comments:

The forecast promised real rain on the night of the 14th and into the 15th, but we got only 0.1 inches, at least at my house. It's supposed to rain again at the end of the week, but the long-term forecast is for another dry winter. I miss the big three-day storms and downpours we used to get regularly in the winter months. The recent rain brings our total for the 2014-2015 rain year to 0.85 inches.
Posted by Colin Talcroft at 8:56 AM No comments: 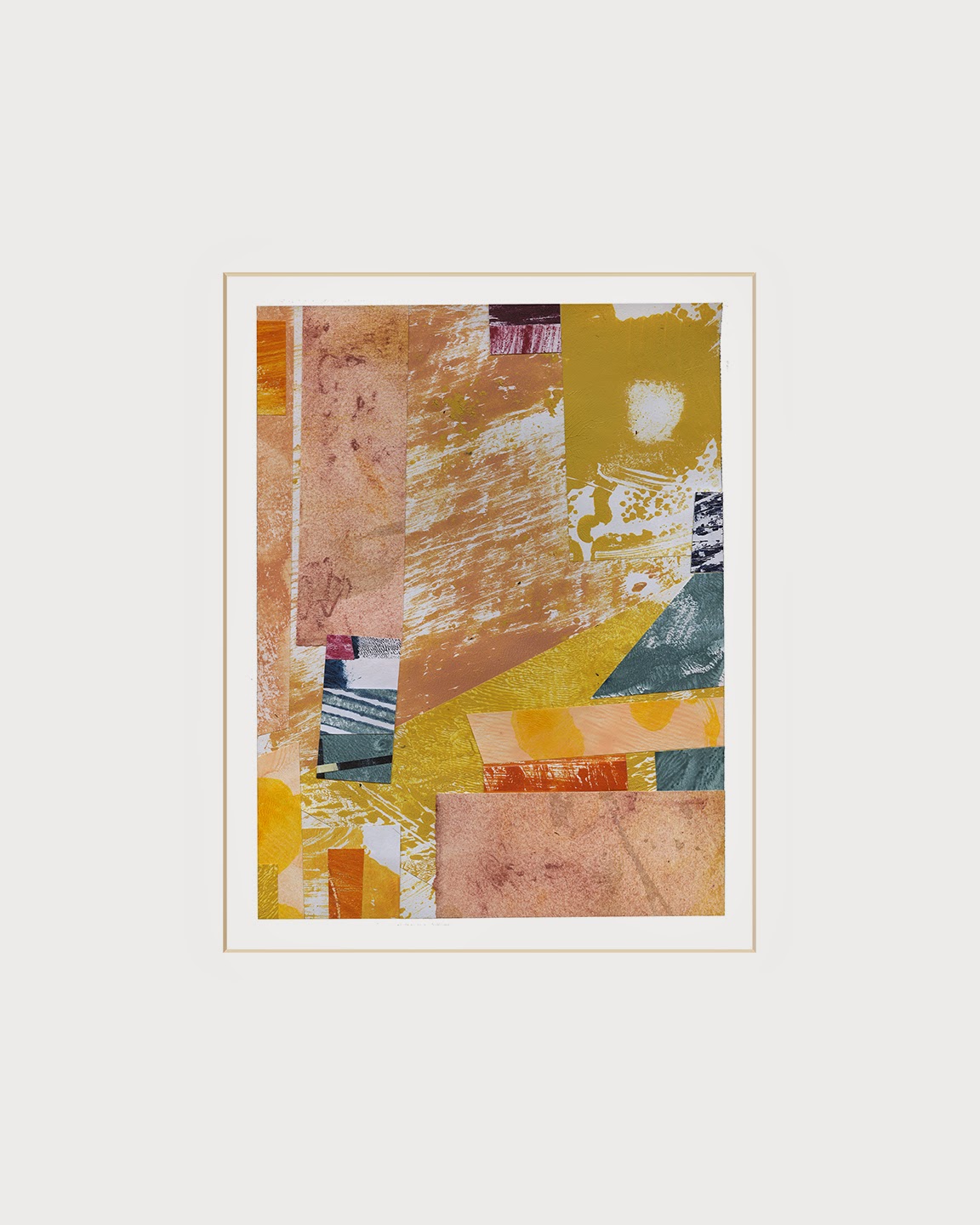 I opened my studio as part of the 2014 Sonoma County Art Trails event on October 11 and 12 (the event continues next weekend, October 18 and 19) and enjoyed talking about art and making art with the many visitors who stopped by. It was a pleasure to get feedback on work I've never shown publicly before. During lulls, I had time to do a little work and finished a couple of pieces using paper I made to demonstrate my working process, which involves painting on paper or mono-printing on paper and then using the papers I make to create collages.

Pictured above is Untitled Collage No. 75 (Santa Rosa), which uses some paper elements printed using Sennelier's Naples yellow and incorporates some scraps of a sheet of paper with pastel marks on it that a fellow collage artist brought me.

Sonoma County Art Trails 2014 continues next weekend (October 18 and 19). My studio is No. 125. Stop by to see my work in person. I'm also showing photography and printmaking.

Click on the images for larger views. For more, use the Art I'm Making tab to the right or visit my collage website at http://ctalcroft.wix.com/collage-site/ (requires Flash Player). 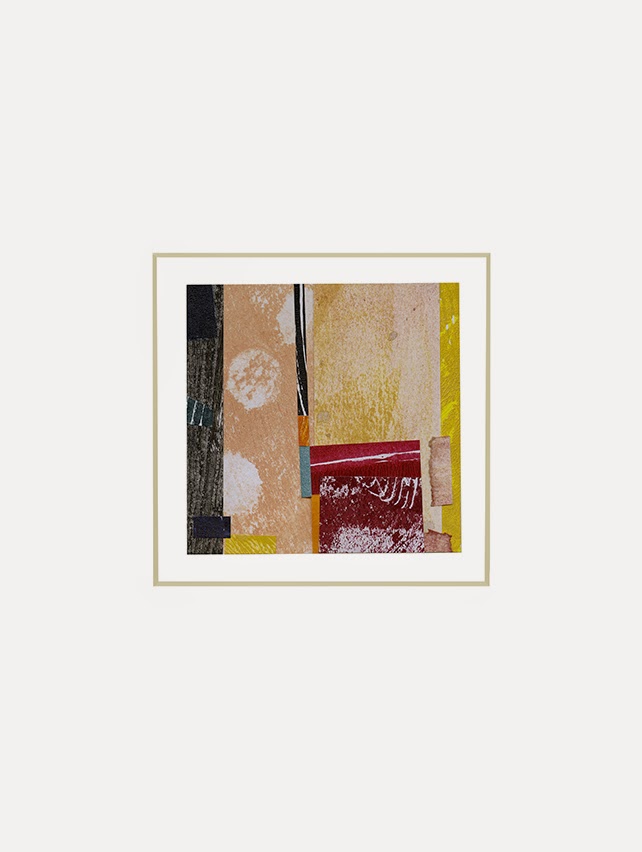 Untitled Collage No. 76 (Santa Rosa) also uses a scrap of the pastel-marked sheet and some of the Naples yellow paper, but also incorporates older raspberry-colored papers and a peach-colored paper with round shapes.
Posted by Colin Talcroft at 10:57 AM No comments: 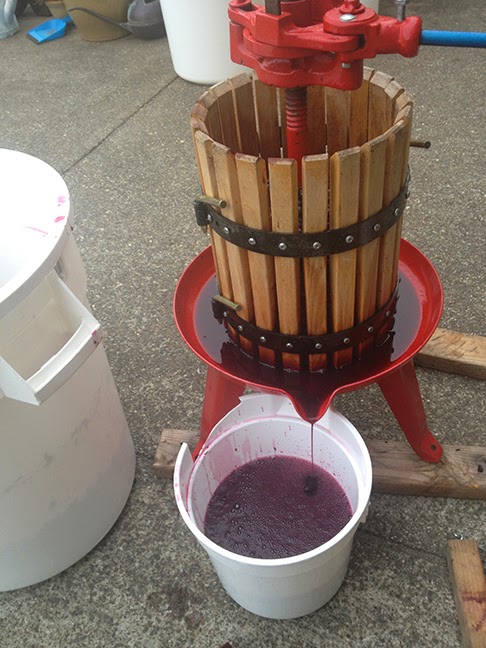 I got up early on the morning of October 11 to press our 2014 Cabernet before the Sonoma County Art Trails weekend began. I finished about 15 minutes before the first visitor arrived. I ended up with only 5 gallons of new wine, which will mean only 25 bottles of 2014 Cab, while about forty bottles is normal. The following day I racked and sulphited the 2014 Sangiovese rosé. We'll get only about 15 bottles of the pink wine. The Sangiovese yield has typically been between 15 and 25 bottles a year. I inoculated the Cabernet with malolactic starter on the morning of the 12th, so it should be starting its malolactic fermentation. The carboy in the living room makes a nice conversation piece amidst all the art I'm showing. I still haven't bottled the 2013 Cabernet. Perhaps this week.
Posted by Colin Talcroft at 10:40 AM No comments: 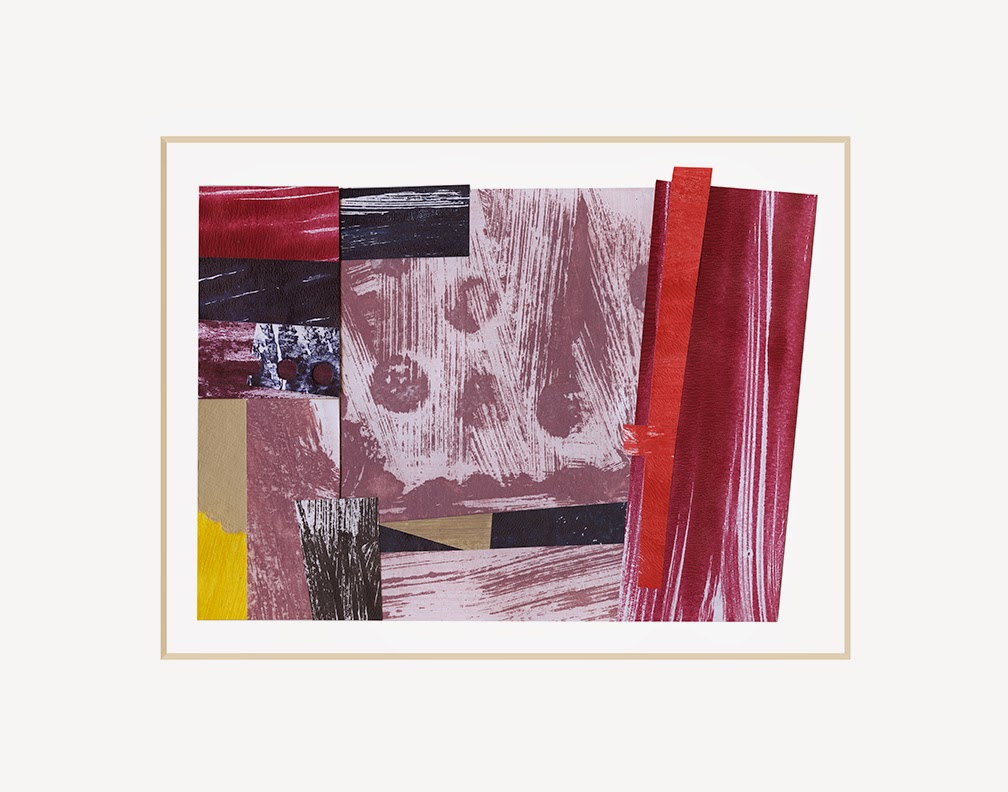 During the first two days of Art Trails, I spent a lot of time on the floor working on collages in between visits by people coming to see my studio. I had time to finish several new collages. Here are Untitled Collage No. 73 (Santa Rosa) and Untitled Collage No. 74 (Santa Rosa). The first of these plays with the space a little. I've left the edges at slightly odd angles on two sides, which gives the piece a somewhat playful feel.

The second uses a rather large swath of green to balance the dark forms at the left and top edges. The green is offset by a beige circle.

Sonoma County Art Trails 2014 continues next weekend (October 18 and 19). My studio is No. 125. Stop by to see my work in person. I'm also showing photography and printmaking.

Click on the images for larger views. For more, use the Art I'm Making tab to the right or visit my collage website at http://ctalcroft.wix.com/collage-site/ (requires Flash Player). 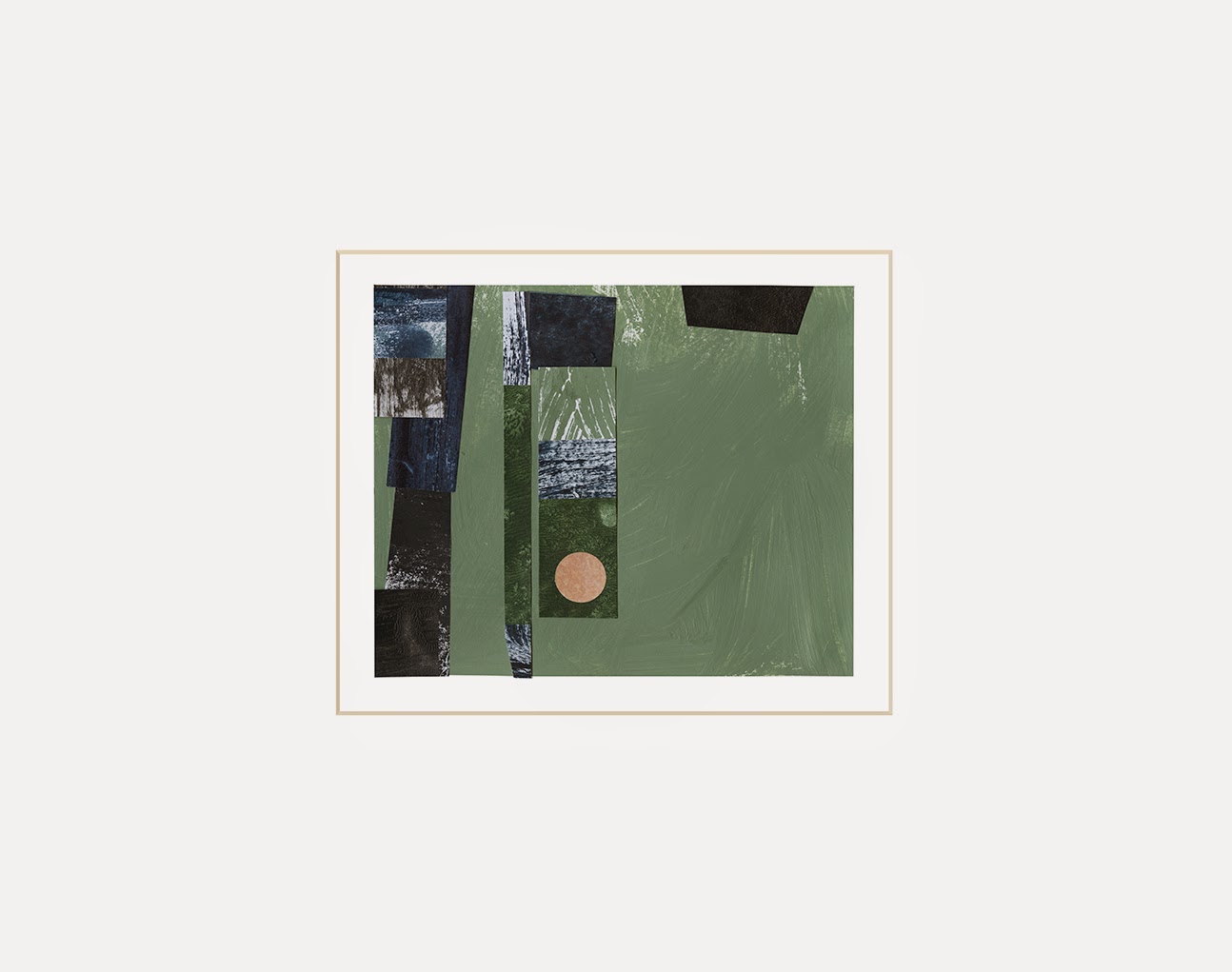 Posted by Colin Talcroft at 12:07 PM No comments:

Books I'm Reading: Exhibitionism: Art in an Era of Intolerance

I purchased Lynne Munson's Exhibitionism: Art in an Era of Intolerance (Ivan R. Dee, 2000) several years ago. I read it this week. I wish I had pulled it down from my book shelf sooner. It clarifies a great deal about trends in late 20th century art. It crystallizes in a very useful way lot of what I and many others have sensed about the "art world." Munson looks at the art world using two case studies--the evolution of arts funding through the National Endowment for the Arts (the NEA) and faculty politics in Harvard's art history department. Both cases are instructive, but it's enough here to look at the example of the NEA.

President Johnson signed the NEA into law on September 29, 1965 following a congressional act of August 1964 that had created the National Council on the Arts. The council--an impressive group that included Isaac Stern, David Brinkley, Gregory Peck, David Smith, Leonard Bernstein, and later John Steinbeck, Richard Diebenkorn, and Sidney Poitier, among others--was tasked with creating an outline of the new Endowment's mission. An advisory panel that set priorities for the Endowment's visual arts program recommended that top concerns should include providing "direct assistance to the creative artist" and recognizing "excellence in artistic achievement." The first group of NEA grantees included men and women from all over the country working in a wide range of styles of painting and sculpture. The grants were based on a combination of artistic excellence and need. In other words, the people who created the NEA saw the Endowment's role as a source of direct support for the best working artists in the country, particularly those who were struggling financially. Many of the artists chosen to receive grants had virtually no income from their art, while producing work widely recognized as superior. Gene Davis, Edward Ruscha, Donald Judd, and Mark di Suvero were among the first group of grantees.

With the election of Richard Nixon came a change of leadership at the NEA that immediately and permanently changed its tenor, propelling it in the direction of the controversy perhaps most associated with the entity today, and, ultimately, creating public skepticism about the wisdom of any kind of public arts funding, sabotaging the original intent of those who brought the NEA into existence, people who took it for granted that quality art was essential to the life of a healthy nation. At the same time, Nixon's advisors recommended vastly increasing the NEA's grants--but mostly for political reasons; they believed spending on the arts domestically would go some way toward ameliorating the increasingly negative impact at home of what was going on in Vietnam. The associated bureaucracy grew and efficiency declined. The NEA's budget was less than $10mn in 1969, but well over $60mn already in 1974, when Nixon left office. The NEA awarded $16 in grant money for every administrative dollar spent in 1967 but only $10 per administrative dollar by 1983.

When Nixon appointed Nancy Hanks to the leadership of the Endowment, a shift in emphasis away from artistic excellence and toward pluralism accelerated. Nixon wanted to expand the audience for art. Hanks wanted that and much more. With growing funding at her disposal, she oversaw a sharp shift away from supporting individual artists (which, as Munson notes, became the Endowment's lowest priority). Public outreach and support for art institutions became the priority while the scope of eligible activities was expanded to include photography, printmakers, videographers, performance artists, conceptual artists, and even art critics. Before long, virtually any kind of creative activity or arts-related entity (many highly controversial) became eligible for NEA funding and the NEA began to feed the fringes of an expanding art world rather than support traditional artists in their studios.

As Munson puts it, "This weakened standard for awardees, together with the increases in funding, encouraged a freewheeling approach to grant making. Instead of painstakingly whittling down a list of candidates to only the best and brightest, the visual arts panels were now handing out hundreds of grants." The NEA was fueling the expansion of just about every new trend that came along, creating an illusion of value where often there was none and debasing itself at the same time. Eventually, the NEA came to sponsor the radical and deliberately controversial almost exclusively, effectively censoring most serious artistic activity. To get a grant, it was more important to be different, "interesting," or shocking than to exhibit any kind of technical skill or artistic vision. The NEA came to foster exhibitionism while banishing what many would still today consider more serious art from the pool of those eligible for support. This is the exhibitionism of Munson's title. The intolerance she refers to is the entrenched institutional hostility toward traditional art forms that has come to characterize the contemporary art world. Her book goes a long way toward explaining how we got where we are now.

The story of the NEA's evolution nicely illuminates the backdrop of public confusion about the visual arts today and deep public skepticism about art and government agencies associated with the arts. It also suggests why the only people that make a living as artists today seem to be those that feed off the arts bureaucracy--the posers that create "art" for dealer and gallery leaches that foist a great deal of trash on "collectors" who have no taste and have few places to go to look for less-biased guidance. While not everyone will agree with me about the lamentable state of affairs that has resulted from trends in the last 40 years or so, Exhibitionism: Art in an Era of Intolerance is well written, well argued, and hard to put down.

Posted by Colin Talcroft at 11:57 AM No comments: