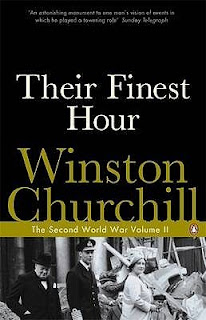 I've just finished Their Finest Hour, the second volume of Winston Churchill's six-volume history of WWII. Much of what I said about the first volume, The Gathering Storm, applies here. This, the next installment in Churchill's detailed chronicle of the war from the position of an insider, is again delivered in crisp, efficient prose and draws heavily on contemporary documents. In Their Finest Hour, Churchill takes us from his taking over as Prime Minister in May 1940 through January 1941. The main events in the period were the capitulation of France (which left Britain standing virtually alone against Hitler and Mussolini), the Battle of Britain, and the beginning of the Blitz--the mass bombing of London. The war in North Africa was just beginning to heat up as well. Once again, Churchill's epigraph sums up the book nicely: "How the British people held the fort alone till those who hitherto had been half blind were half ready." It's fascinating to read Churchill's many memos to President Roosevelt during this period, repeatedly urging a reluctant president to help. I'm now deep in Volume III, The Grand Alliance.
Posted by Colin Talcroft at 11:42 AM No comments: 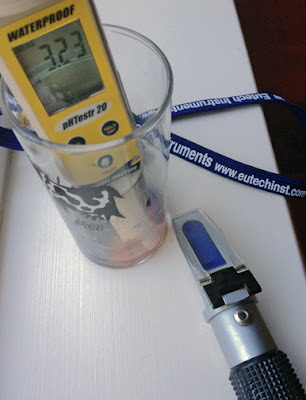 Today I took a decent sample of both the Sangiovese and Cabernet grapes in the garden. The Sangiovese is at 19.6 degrees Brix and a pH of 3.22. Some say the best indicator of ripeness for picking is given by taking the square of the pH and multiplying that by degrees Brix. For the Sangiovese grapes I tested today, that yields a number of 203. A value of 200 is supposed to be ideal for white wines, a value of 260 ideal for red wines. As I'll be making a rosé from the Sangiovese, that doesn't really help, but these are just general guides. From experience I know that the Sangiovese grapes aren't really ripe yet. The seeds are brown and fairly crunchy, but not really mature-looking. I'll be aiming for about 22 degrees Brix (or a little more) and a pH of around 3.4 or so. In that case, pH squared times Brix would be 254, a good number for red wine by the rule of thumb--which is to say that my experience has been that it's best to treat the Sangiovese grapes for rosé as grapes for red wine when it comes to deciding when to pick.

The Cabernet grapes tested at 22.0 degrees Brix. PH was 3.04. PH squared times degrees Brix yields 203 (coincidentally, the same as the Sangiovese). Too early to pick. With the Cabernet, I like to pick at about 24 degrees Brix with the pH at about 3.5. That gives a number of 294 using the rule of thumb, which is nominally on the high side, but most of the books I use for reference in winemaking were written for an East Coast audience and a colder climate--a climate where pH rarely gets as high as it routinely does here, so the number doesn't concern me much. Again, it's just a rule of thumb. This year will be our ninth harvest. I've made the wine enough times by now that I have a feel for what's right. The Cabernet seeds, like the Sangiovese seeds, were brown and moderately crunchy, but, again, not entirely mature. I'm guessing we'll be harvesting in the second week of October, which has been fairly typical. So far, zero losses to raccoons or other critters. The fruit looks great.
Posted by Colin Talcroft at 9:42 PM No comments: