First Home-grown Tomatoes of the Year (2014) 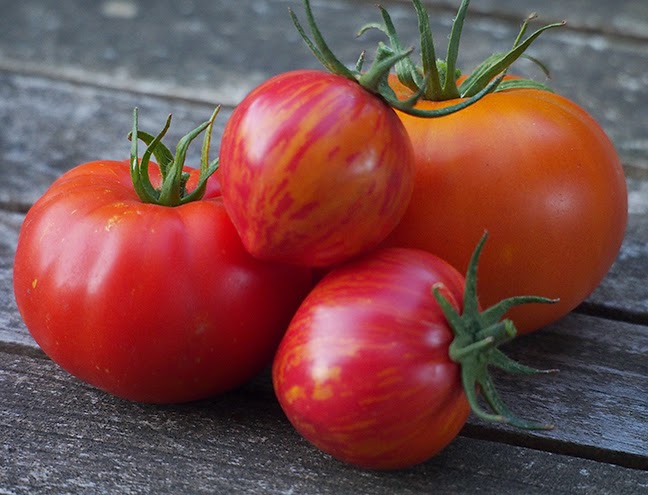 We've been enjoying cherry tomatoes for several weeks now (popping them like candy before breakfast has become a habit), but today I harvested the first full-sized tomatoes from the eight plants we have in the garden this year--mostly heirloom varieties. These pictured are Brandywines and a couple of Dragon's Eyes. They will have been consumed by the time you read this--probably in the form of a caprese salad.
Posted by Colin Talcroft at 8:38 PM No comments: While it goes without saying that quality is more important than quantity when it comes to art, there's something to be said for establishing a regular work routine. It was in the middle of July 2013 that I made my first collage. It happened that I finished about one new collage a week in the following weeks. I decided that it would be good to try to maintain that pace, so that I would have 52 finished works a year later. I've been able to do that. In fact, I've exceeded that pace. In this, the last week of July 2014, I should have finished 54 collages, but I have finished 60, and here are Untitled Collage No. 58 (Santa Rosa), Untitled Collage No. 59 (Santa Rosa), and Untitled Collage No. 60 (Santa Rosa). 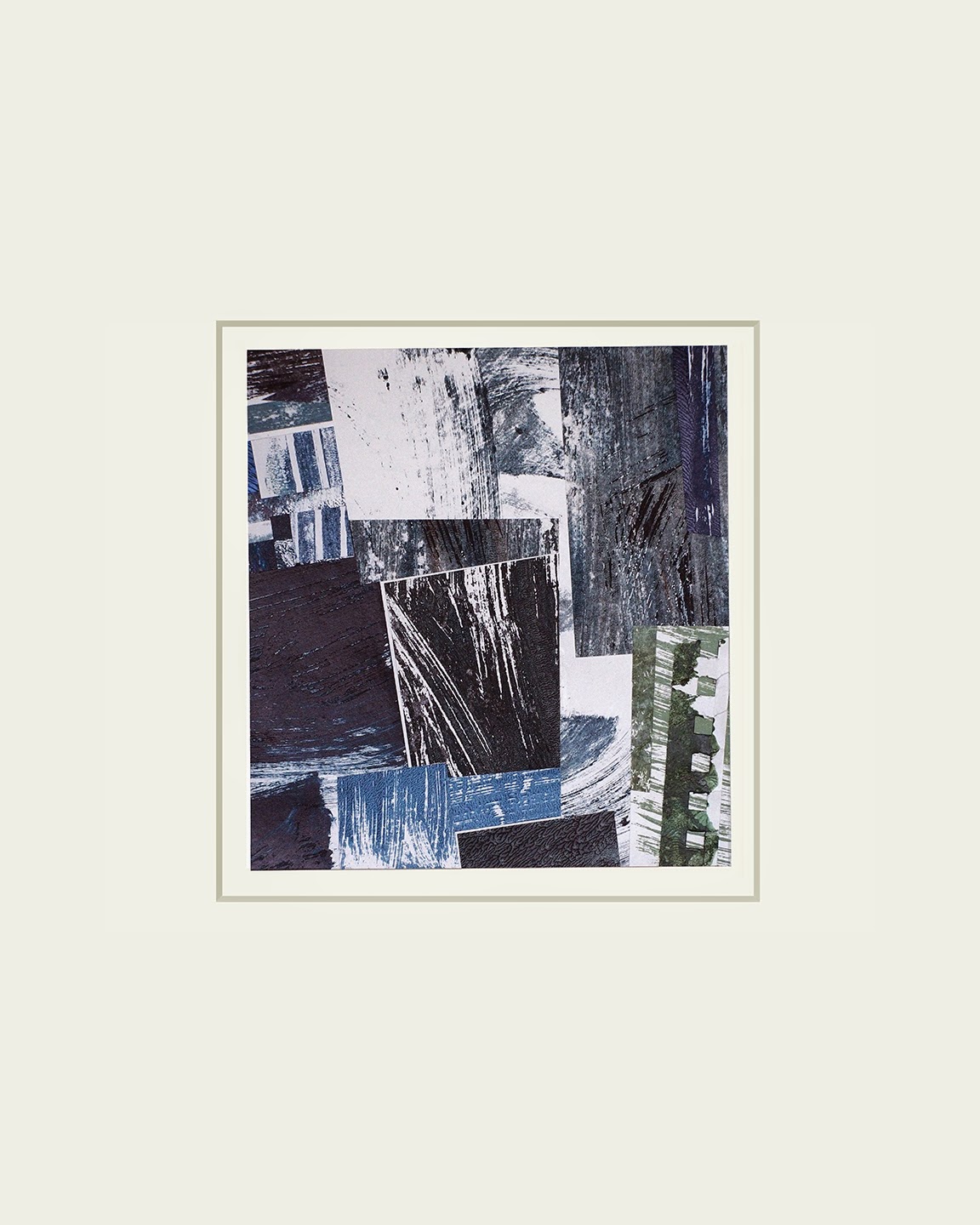 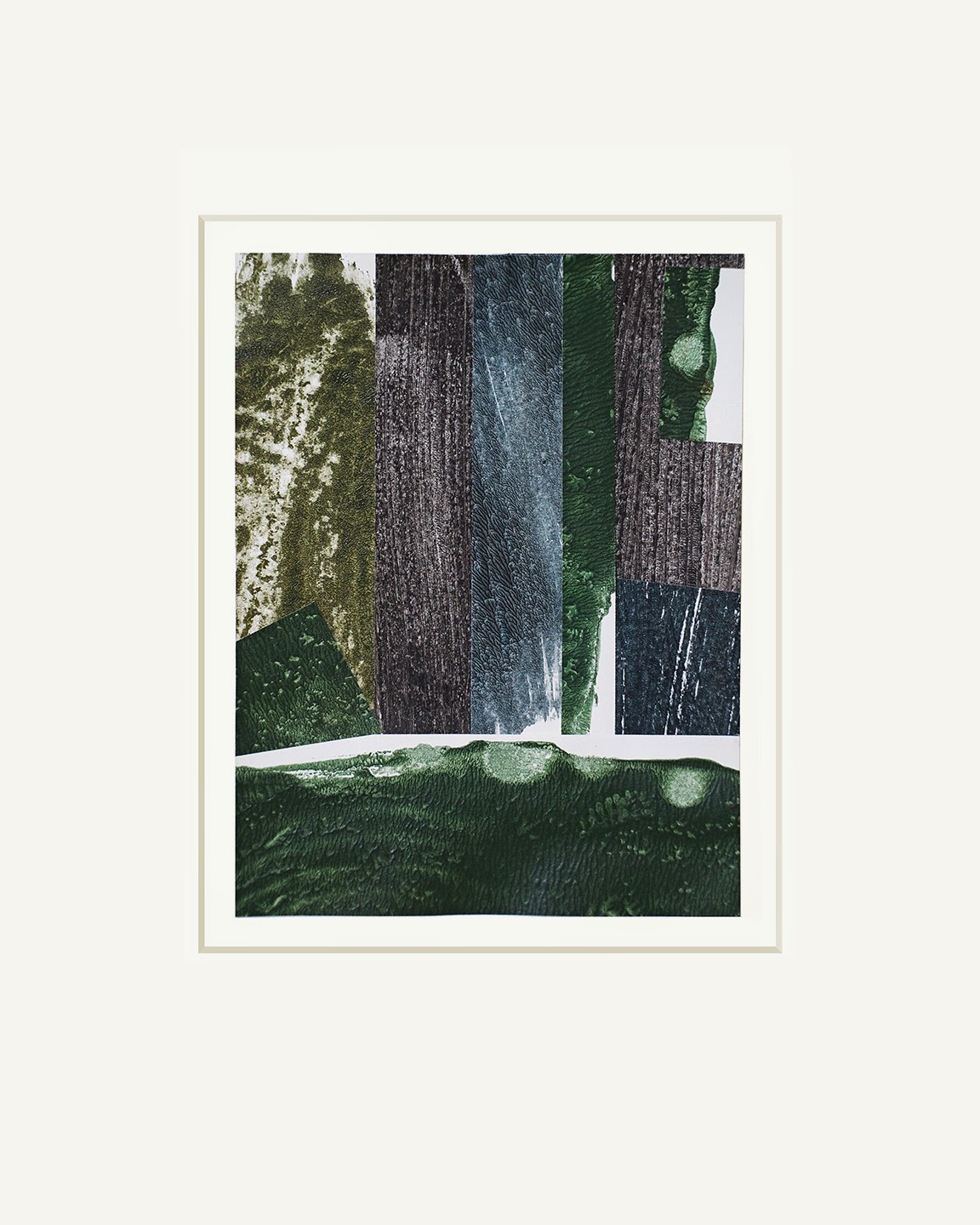 Posted by Colin Talcroft at 9:46 AM No comments: 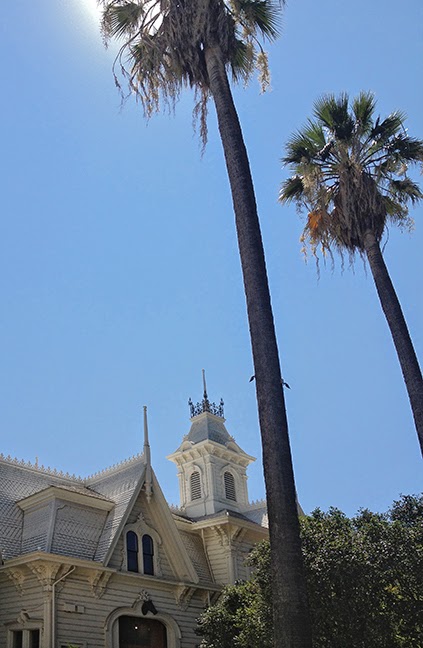 Made a short trip to Sacramento recently, mainly to visit the Crocker Art Museum again, but took the opportunity also to visit the old Governor's Mansion in the city. The large Victorian house was built in 1877 not for the governor but for Albert and Clemenza Gallatin. Gallatin was a partner in a large hardware firm in Sacramento who had become very wealthy supplying the railways and purveying to men who had become rich in the gold and silver businesses, among others.

The $5 tour is worth the time (about an hour). Tickets are sold in what used to be the stables and carriage house, an impressive building in itself (pictured here with palms). Many details date back to the original construction, including some of the original plantings (the palm trees and a couple of very large camellias), but the house has undergone modifications that reflect decades of use by the first families of California, many made in the 1950s and 1960s. The result is an interesting blend of late 19th century architecture with bathrooms and a large kitchen brought up to date in a style that's familiar from my childhood. The kitchen looks a lot my grandmother's kitchen did. Thirteen governors used the building as a residence over a period of 64 years from 1903, when the state purchased the structure. It's still used occasionally for special events. 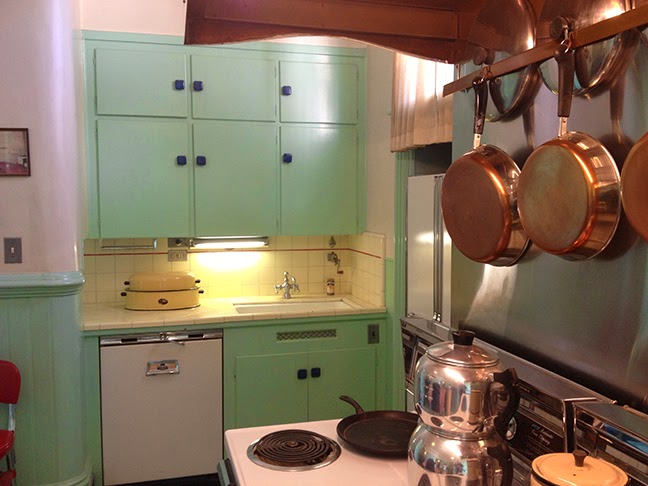 Special exhibits currently at the Crocker Museum of Art include a show of quilts "Workt by Hand: Hidden Labor and Historical Quilts," from the collection of the Brooklyn Museum (through September 1) and a show of African American art from the collection of the Smithsonian Institution's Smithsonian American Art Museum "African American Art: Harlem Renaissance, Civil Rights Era, and Beyond" (through September 21). 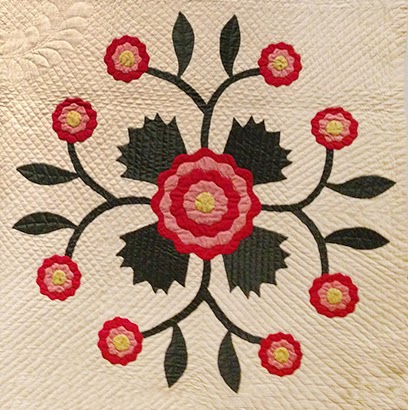 Some of the quilts were magnificent. The curators have hung most examples on the walls, but several are shown on period beds and a number are placed on horizontal supports positioned so that a wall behind the quilt can be painted with the outline of a headboard, allowing the viewer to easily imagine how the quilt would have looked in use. The oldest date from the early 1800s, the most recent are post-WWII work, but the majority are from the mid-1800s. A large number of styles and techniques are represented. Particularly impressive were a large patriotic quilt using reverse appliqué, a fabulously flower-embroidered crazy quilt, a beautiful Rob Peter to Pay Paul quilt in red and white, a large Whig rose quilt (detail shown), and a number of "album quilts"--quilts made cooperatively, with a number of people creating panels later sewn together to form a finished piece. Accompanying materials include popular magazines showing how quilting has been interpreted differently in different periods. Particularly interesting were brief discussions on wall panels of the work from a feminist point of view, raising issues of authorship and highlighting the tendency of curators to see abstract quilts as a precursor of modern abstract painting, usually relegating the quilts (made mostly by women) to a subordinate position and exalting the paintings (made mostly by men), positioning them as the culmination of a trend. 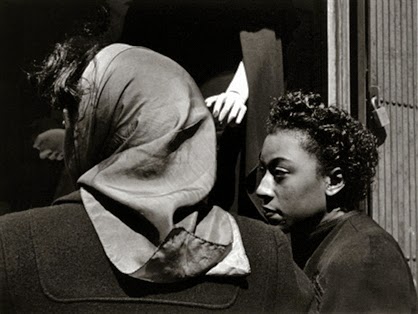 The African American art show is notable for a very large collection of excellent photographic work and a range of paintings from the mid-20th century by less familiar artists (less familiar to me, anyway). Among the photographers, I was impressed by the work of New York-born Roy DeCarava (1919-2009), a name I'd never heard before (but should have, considering the excellence of his work). His prints, mostly of street scenes in New York, are dark and atmospheric on the whole but characterized by starkly contrasting details--islands of light in a sea of black. I especially liked "Two Women, Mannequin's Hand (1950). The show includes work by some familiar names--notably Gordon Parks (1912-2006) and James Van Der Zee (1886-1983) but mostly by people new to me--Marilyn Nance, Robert McNeil, Earlie Hudnall Jr., Tony Gleaton, and Roland L. Freeman, among them. Among the paintings, A couple of pieces by Benny Andrews are striking. There are two large collages by Romare Bearden, and I especially enjoyed a couple of paintings by William H. Johnson (1887-1967) in an almost primitive style. Well worth the time, especially for the photographs. Finished the day with a very good dinner at The Waterboy.

Posted by Colin Talcroft at 9:31 AM No comments: