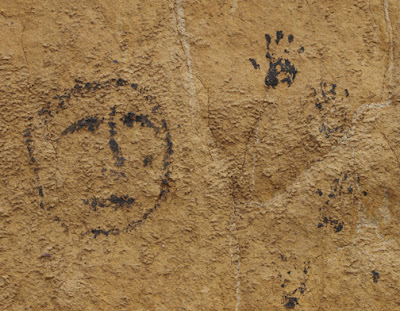 On a visit to the Marin Headlands I found a beautiful wall of ochre mud at the edge of Rodeo Lagoon. Above the ochre layer was another of burnt umber-colored mud. Someone had dipped a finger in the dark mud to paint on the ochre-colored wall, leaving behind a face and handprints. Found art. 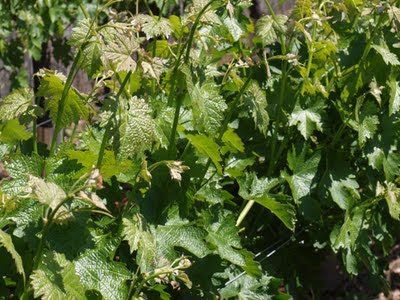 I got into the vines today and made the final selection of the canes that will be allowed to grow and fruit this year. Tomorrow morning, if time permit, I'll do a second sulfur spraying to protect the vines against mold. So far, the plants look excellent. A lot of rain over the winter and cool, dry weather so far this spring have got them off to a very good start. I hope the wine will be as good as the condition of the plants promises. The photo above shows the vines before thinning, the photo below shows them after thinning.

[Update: Did the second sulfur spraying of the season the following morning, May 11.] 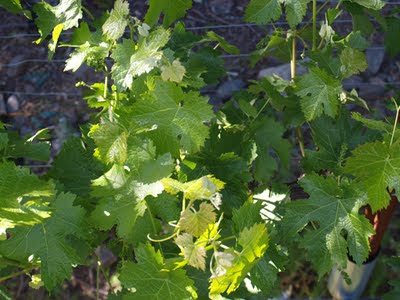 Posted by Colin Talcroft at 11:33 PM No comments:

I attended an afternoon Santa Rosa Symphony concert today directed by Bruno Ferrandis with pianist Jon Nakamatsu as soloist in the Tchaikovsky Piano Concerto No. 1. The scheduled program was all Russian music, but Ferrandis opened the concert with the "Nimrod" variation from Elgar's Enigma Variations, played in memory of Evert Person and Jess Jackson. Both were supporters of the Symphony and both died recently. The scheduled program began with Fairytale Poem, by contemporary composer Sofia Gubaidulina, followed by the Tchaikovsky concerto and then Mussorgsky's Pictures at an Exhibition after intermission.

I formed my impressions of the Gubaidulina piece before looking at the program notes. I had to laugh when I read through them. The music felt cinematic to me, but I was put in mind of 1950s science fiction rather than the animated subjects that are believed to have inspired the piece (it seems the composer has never really explained the precise meaning of the title). Apparently, Gubaidulina supported herself in the days of Soviet control of the arts by writing a great deal of music for films of all kinds, but apparently no science fiction. The program notes speak of "dangers lurking" but also of "cheerful adventure." I seem to have tuned in mostly to the dangers. The mood created seemed ominous to me, with quivering flutes and shimmering string tremolos particularly memorable. I half expected to hear a theremin emerge from somewhere toward the back of the stage--but no theremin was involved: Gubaidulina has drawn on conventional instruments to create a consistently interesting texture open to a variety of interpretations, it seems. The performers gave the impression of being well rehearsed today, right on top of the music, and very much in tune with the conductor. I enjoyed this very much. Gubaidulina is another composer I'll now be looking out for.

I must admit the Tchaikovsky piano concerto is not one of my favorite pieces of music, but it was a lot of fun to see it played, as it keeps both the soloist and the orchestra quite busy. Again the orchestra seemed in good form. Despite a couple of wobbly solo bits in the brass section and a rather hesitant-sounding flute at one point, the overall impression was solid, and Nakamatsu played very well. Nakamatsu got a standing ovation and a half out of his performance--the half standing ovation at the end of the first movement. Tchaikovsky sometimes had a way of making his music sound finished right in the middle (this piece and the Violin Concerto are good examples). While I don't mind people clapping after a particularly well-played movement, clearly some people thought the concerto had finished and it took a few moments for everyone to figure out why Nakamatsu remained seated and conductor Ferrandis continued to face the performers.

After intermission, Ferrandis led the Santa Rosa Symphony in Musssorgsky's Pictures at an Exhibition in the version orchestrated by Ravel. As a teenager just getting interested in classical music, this is one of the pieces I first latched onto (like many other people). It is varied, colorful, and immediately accessible. Again the performers seemed in good form. Although Ferrandis took some of the slower sections at a rather faster tempo than I would have preferred, the overall effect was persuasive.  Taken as a whole, a satisfying concert. 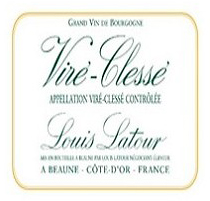 The label on this one had me a bit puzzled. Mâcon-Viré I knew and Mâcon-Clessé I knew, but Viré-Clessé? It seems I'm a bit behind the times. I see that what were once Mâcon-Villages bottlings from the villages of Viré or Clessé have since 1999 been subsumed into a larger AOC called Viré-Clessé, which can include wine from grapes grown in those villages as well as two other former Mâcon-Villages villages--Laizé and Montbellet. Still, it seems to me I've seen Mâcon-Viré and other village wines from this area more recently than 1999....
In any case, this is a Mâconnais wine (made from Chardonnay--about the only grape variety planted here) from Louis Latour. It seemed worth a try, and it was quite satisfying, offering up precisely what a good village wine from this area should: The wine was dry, crisp, light but flavorful and with a good balance between fresh acidity and a slightly buttery richness. A pretty, pale gold in the glass, the wine had attractive scents of melon and butter and just a suggestion of passion fruit. There was another scent that I couldn't quite pin down--raw zucchini perhaps? With a little time in the glass, there was also something suggestive of oranges. On the palate, the wine seemed quite dry at first--a bit austere even--with an interesting hint of astringency and bitterness that was nicely offset on the mid-palate by a rush of fruity sweetness and a richness that somehow suggested pastry to me. Good length and with a fairly nuanced finish that was marked by a back and forth between the buttery elements and the acidity. Not profound or especially complex, but solid wine for everyday drinking or better. Likely to be very pleasing well chilled, dining outdoors on a summer evening. Reasonably priced at $9.99 at Trader Joe's. The sort of wine I'm likely to buy again.

For more wine reviews, use the "Wines I'm Drinking" label at top right
Posted by Colin Talcroft at 10:29 PM No comments: