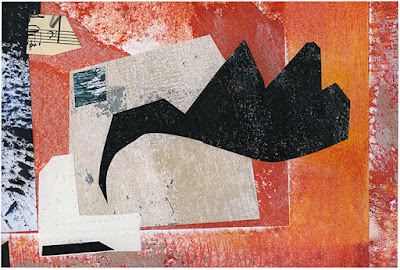 A new collage drawing on the results of a recent morning of making new monoprints.

It's been raining hard all day. Checking the rain gauge at 4:30PM on the 10th, we have an additional 2.60 inches of rain. That brings our total so far to 26.45 inches. We've had flash flood warnings all day long, but everything in our immediate vicinity appears secure, with drainage working the way it's supposed to. Others haven't been so lucky. Normal cumulative rainfall for January 10 in Santa Rosa is 16.44 inches. We are thus now more than 10 inches ahead of normal at my location. 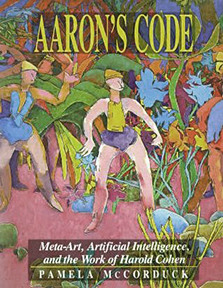 Dr. Harold Cohen and his creation, a computer program/drawing machine named Aaron, seem to be virtually unknown today, even among my artist friends. From my first personal encounter with Aaron (in early 1985), however, I thought him an extraordinary creation. Having just read Pamela McCorduck's well written, deeply researched book about Cohen and his machine, Aaron's Code: Meta-art, Artificial Intelligence, and the Work of Harold Cohen (Freeman, 1991), my admiration for Aaron and his creator has only grown.

Before reading the book, I knew little about Cohen's background. I had assumed he was a computer scientist. To the contrary, Cohen was a successful abstract painter in his native Britain before he ever began to dabble in computer programming in the late 1960s, a time when computers were primitive. In 1968, dissatisfied with the life of a painter, he left the UK to accept a position at UC San Diego, where he met Jeff Raskin (later of Apple Computer), who taught him how to write code.

Cohen's initial motivation appears to have been creating a machine that would help him make his own art, but he quickly became fascinated by fundamental questions about the process of artistic creation, the very definition of art, and how art generates meaning—about the cognitive processes that underly art-making and the experience of art. He started down a decades-long road that resulted at first in a program that created crude drawings, based on a complex set of general rules about line and spatial organization, but eventually evolved into a vastly more sophisticated program with "knowledge" not only about the process of filling a sheet of paper with marks that are meaningful to human beings but with knowledge about objects in the real world, including plants and the human figure. In its initial, mark-making phase, Aaron drew in black ink on white paper. Later Cohen gave Aaron color.

Aaron is infinite. Run the program and Aaron will create a unique drawing based on his knowledge about what makes an image. While Aaron has a distinct style, no two of his drawings are ever the same. Now that his creator, Dr. Cohen has died (in April, 2016, at the age of 87), Aaron will learn nothing new, but he will forever be capable of creating art, so long as the platform he runs on remains viable and there are people interested in seeing a new drawing.

The existence of Aaron raises interesting questions about art, about intelligence, and about the meaning of art and the meaning of making art. Is Aaron intelligent? In some sense, yes. Is Aaron self-aware? No. Is Aaron expressing anything when he draws? No: Aaron is a computer program with no feelings, no motivations, no memory even of what he has drawn before. Yet, what Aaron creates generates meaning in the minds of those who see his work. And this is, perhaps, the most interesting idea McCorduck's book conveys: that Dr. Cohen saw art as generating meaning in the viewer rather than communicating meaning from the artist. Aaron is an excellent argument for the idea that the meaning in a work of art is almost wholly in the mind of the viewer. The book and its subjects are rich beyond my ability to express them. Suffice it to say, this is likely to be an exciting read for anyone with an interest in the human activity we call art-making. Aaron's Code is out of print, but I easily found a copy for a few dollars on line, and good libraries may have a copy*. Recommended.

*I just did an online search: In the Bay Area, there are copies in the libraries of UC Berkeley, UC Davis, Stanford, and in the San Francisco Public Library system.
SaveSave
Posted by Colin Talcroft at 11:46 PM No comments:

In our first big storm in quite a long time, the wind is howling and it's been raining all night. A large branch has fallen from a coast live oak in our yard. So far, we've had 2.70 inches of new rain, as of the morning of January 8. That brings our total so far for the 2016-2017 rain year to 23.30 inches at my location. Normal for this date in Santa Rosa is 15.9 inches. It's supposed to rain for the next three days. Normal annual rainfall for Santa Rosa is a little over 36 inches. We're well on our way to having an above-average year for the first time in a long time.

[Update: As of the morning of January 9, we have had an additional 0.55 inches at my location, bringing the total so far this year to 23.85 inches.]
Posted by Colin Talcroft at 11:23 AM No comments: