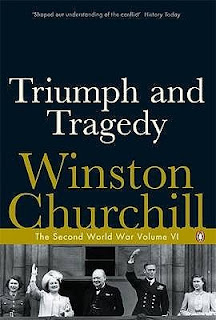 At nearly 600 pages, Triumph and Tragedy, the sixth and last volume in Winston Churchill's history of WWII, is one of the shorter volumes. It moves at a much faster pace than any of the earlier ones, with more about politics than military operations, but it's no less interesting for that.

Triumph and Tragedy is in two sections, the first, beginning with the D-Day invasion, takes us through the end of the fighting in Europe and then the final stages of the war in the Pacific. The second treats the aftermath of the armed world conflict, particularly dealing with Stalin and the question of how to balance Soviet claims to Polish territory with Polish claims to German territory. In other words, Churchill describes the triumph of the victories over Germany and Japan and the tragedy of how the aftermath of the global conflict played out. He makes it clear that he feels the partitioning of Germany into zones of influence administered by Germany, France, the US, and the Soviet Union could have been handled far better than it was. The second half of the book is largely a chronicle of Churchill's frustration. Throughout the six volumes, but particularly in this one, the clarity of his vision regarding the Soviets is remarkable. He saw the falling of the iron curtain long before it happened, and it happened much the way he warned it would.
Posted by Colin Talcroft at 9:48 AM No comments: