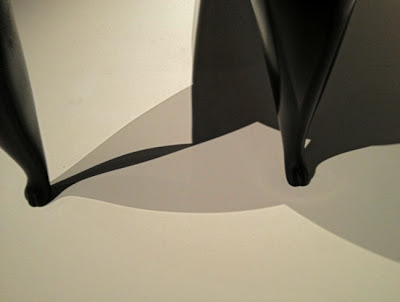 The black feet of a statue and its shadow in the De Young Museum, in San Francisco, made this abstract composition. Found art.

For more found art, see my blog Serendipitous Art.
Posted by Colin Talcroft at 9:37 AM No comments: 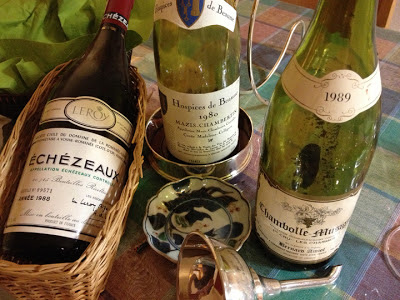 Well, in the end*, I opened a 1980 Hospice de Beaune Cuvée Madelieine-Collginon Mazis-Chambertin and a 1989 Chambolle-Musigny "Les Charmes" from Bernard Amiot. I was worried about the condition of both wines, and so had the Échézeaux in the picture ready as a back-up, but, happily, both wines were delicious--quite mature, and therefore very soft and silky, but with real presence, too. The younger wine was predictably a little brighter and fresher, but the consensus was that the Mazis-Chambertin was much the better (equally predictably). I'm just glad both wines were in good shape. Makes one long for Paris and Beaune. 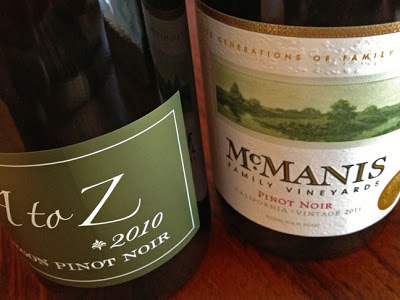 Tomorrow is Thanksgiving. I plan to make coq au vin--that venerable French chicken stew that always puts me immediately in mind of a Hugh Johnson remark about the dish. In the 1997 edition of his Pocket Encyclopedia of Wine, he said "Coq au vin: In an ideal world, one bottle of Chambertin in the dish, two on the table." This is not quite an ideal world. While I do have at least one bottle of old Gevrey Chambertin to serve tomorrow night (if not Chambertin proper), I don't think I have two--and, frankly, the mature wines I have tucked away would do less well in a coq au vin, I suspect, than something younger and more vibrant. I picked up two bottles for use in the pot tomorrow. I went looking for inexpensive Pinot Noir (relatively speaking) that would still be good enough to add some worthwhile flavor to the cooking. I sampled them this evening--not one to miss a chance to taste a couple of new wines. Brief tasting notes follow.

2011 McManis Family Vineyards California Pinot Noir
A fairly deep carmine hue. Light raspberry scent on the nose. Fairly simple, clean fruit scents but with a suggestion of vanilla. Doesn't jump out of the glass. Later develops some citrus hints. Quite tart. Has an underlying core of fruit tending toward cherries, but the fruit is masked by the rather bright acidity--at least at first. Not especially long, but has some interesting, lingering bitter almond flavors on the finish that mingle with the tartness. I decided to leave this open for while to see if it might evolve into something a little softer and more approachable. Coming back to the wine after an hour or so, the mid-palate cherries seemed laced with vanilla, but the wine still seemed mostly distinguished by its tartness. Not in any way unpleasant, but seems in no way special either. Suitable for everyday drinking, but there are other wines I'd rather spend $11 on. I'll cook with this tomorrow, but I'm not likely to buy it again for drinking. Still, this is a decent wine given the price. $10.99 at Santa Rosa Whole Foods.

2010 A to Z Oregon Pinot Noir
A medium-pale garnet color. Oak and smoky scents on the nose rather than fruit. Hints of something tropical that put me momentarily in mind of gardenia--not a scent I usually associate with Pinot Noir. Orange rind in the background and also something bitter--like Campari. Musky hints too, but not classic Burgundy barnyard either. A moderately complex, if unorthodox nose. First impression on the palate is one of tartness and little else, but quite fruity and momentarily sweet on the mid-palate before developing slightly woody, herbal flavors on the finish, which is of moderate length. The finish is marked also by a fairly strong dose of oaky vanillin. Like the McManis wine, solid but not exciting. I probably won't buy more of this one either, although it was ultimately the more interesting of the two wines. I will mostly use it in tomorrow's coq au vin. $19.99 at Santa Rosa Whole Foods.

For the record: Yes, I know it's NOT true that cooking wine can be any old wine. As many have pointed out before me, when you cook with wine, you boil off the water and the alcohol for the most part, and what you're left with is precisely what makes the difference between a good wine and an ordinary one. Thus, it makes sense to cook with the best wine you can afford to use. That said, I can't bring myself to pour an entire bottle of Gevrey Chambertin into the pot. We'll be opening old Burgundy tomorrow to drink.


(I have no financial connection with any producer or retailer of wine.)
Posted by Colin Talcroft at 11:56 AM 1 comment:

The recent storm dropped a healthy 2.1 inches of rain at my house. It was mostly dry today (Sunday), but more rain is predicted for tomorrow. That's likely to require an update, but so far our 2012/2013 rainy season precipitation total as of Sunday night is 4.55 inches. A little over 4.9 inches is normal for November 18, so we are slightly behind average, a gap that we may close tomorrow.

[Update: Subsequent rain has added another inch of precipitation since writing the above. As of November 23, our total for the current rainy season is 5.55 inches, which is about a quarter of an inch below normal for this day.]
Posted by Colin Talcroft at 9:46 PM No comments: