Tonight I tasted the 2001 Chateau Julien "Private Reserve" Monterey County Merlot. I knew nothing about Chateau Julien and I have little experience with Monterey County Merlot. I chose this wine simply because it was inexpensive and--being called a "Private Reserve"--I was hoping it was solid enough in its youth to have stood up to the 11 years it's been in bottle. Brief tasting notes follow.

Pretty to look at. Moderately deeply hued, but not at all a dark, inky wine. Garnet-tinged edges. Showing its age. Herbal on the nose, suggesting red vermouth or bitters. Not a lot of fruit scent, but attractive nevertheless--although I suspect many wine drinkers used to young California wines would find the nose rather foreign. Distant suggestions of licorice. Something reminiscent of sun-dried tomatoes. With time, gained some floral scents. Overall, rather delicate on the nose. My first impression on the palate was disappointment, but the wine got better as I lingered over it. It would be easy to dismiss this as past its prime--which it is. Clearly it's tired. There's only moderate fruit left and the attack seems weak--but it has its charms. For example, there are some good plummy flavors on the mid-palate and the finish is long enough and just complex enough to keep things interesting, despite a lack of real body and presence. In particular, the finish has an attractive nuttiness, a hint of sweetness, and delicate tannins that I enjoyed. If you like your wines bold, brash, fruity, and alcoholic, skip this one, but, if you like the sort of flavors typical of mature wines, you might give it a try. At only $5.99 a bottle at Grocery Outlet in Santa Rosa, I'm not complaining. The current vintage (2008) sells for $42 a bottle on the winery's website. I was just in Monterey last week. I wish I'd known. I might have visited the winery to try some of this producer's more recent efforts. (Although, the fact this is for sale at Grocery Outlet, heavily discounted, may say more about the storage of this particular batch of wine rather than the wine itself.)
Posted by Colin Talcroft at 7:37 PM No comments: 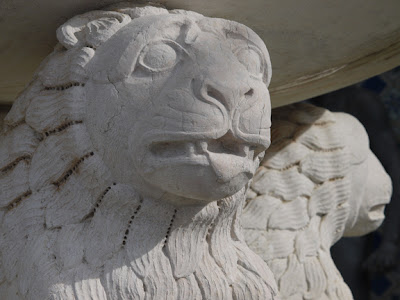 On a short year-end trip to Carmel, Monterey, and San Simeon I visited the Hearst Castle for the first time in many years. The tours are set up in a much better way now than they once were. You can visit one or more of a few sets of rooms with a tour guide and then you're left free to walk around the gardens and visit the indoor pool at leisure. When I last went to San Simeon you could see the pool only on specific tours and you were never set free in the gardens. I took the Grand Rooms Tour, which lets you see the main living room, the dining room, the billiards room, and the theater. Other tours take you through the more private rooms in the house. One goes through the kitchen and other work rooms in the house.

There is much beautiful art in the house. I noticed a very nice altarpiece in the living room, but wasn't able to ask the guide about it. There were some good persian tiles, and a great deal of interesting furniture and architectural detail, much of it shipped over from Europe. Aside from the above-mentioned altarpiece, though, there aren't a lot of paintings in the house, which is a bit strange. Hearst's taste ran to the grandiose and it seems to have been best indulged by acquiring sculpture and buying pieces of buildings. I can't think of another man so wealthy that didn't accumulate a lot of paintings. 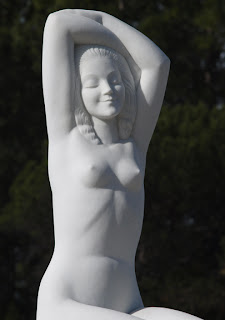 There's a great deal of sculpture in the gardens. Some of it beautiful, some of it in comical bad taste. The collections are very uneven. I wonder how much of Hearst's art collection consisted of things he liked, how much consisted of objects he bought because he could afford to and was advised to by others? I liked the lions on a large stone fountain in the gardens (top). A guard told me the fountain was Italian. Although it's topped with a replica of Donatello's David in Florence, the fountain looked more Spanish to me. The young woman with her arms raised at left is an example of one of the more kitschy works in the gardens. As they say, there's no accounting for taste. 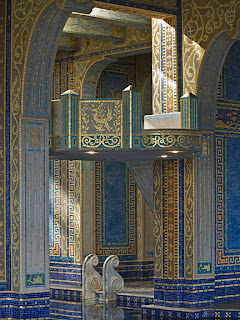 I'm sure I'm not alone in thinking that the indoor Roman Pool is among the highlights of the castle. The entire place is decorated with gold and lapis tiles. The gold tiles are clear glass with gold leaf infused into them. Many of the mosaics show sea creatures. The gold patterns at the bottom of the pool are intended to evoke a starry night sky. The handrails at the pool exits and the posts supporting the distinctive lamps are made of lightly veined Vermont marble. The statues around the pool are modern copies of Greek and Roman originals made for Hearst in Italy. The pool is directly below a number of tennis courts with glass panels set into them that light the pool from above. One of the guards told me that architect Julia Morgan advised Hearst not to proceed with such a plan as it would surely leak and damage the ceiling, which it has. It remains a very special space nevertheless. 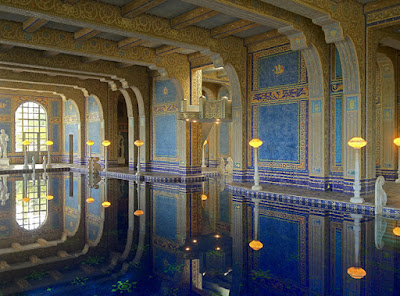 Posted by Colin Talcroft at 12:36 PM No comments:

On a short trip at year-end, showing around friends visiting from Japan, I went to Carmel, Monterey, and San Simeon, going to the Hearst Castle for the first time in many years. 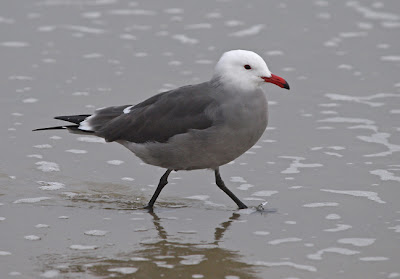 I got up early to do a little bird watching each morning. I enjoyed seeing Heermann's Gulls at all three locations, in both breeding and non-breeding plumage. These are birds that have already left our area (Sonoma County) for the year and that rarely show up there in breeding plumage with their snowy white heads, scarlet bills, charcoal backs, and jet black legs. These are among the most beautiful of the gulls. 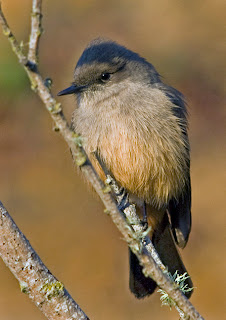 At the Best Western Hotel a few miles from San Simeon, I took an early walk on the beach and was rewarded with one of those memorable birding moments: At one point I could see two Wrentits, a Song Sparrow, a Lincoln's Sparrow, a Hermit Thrush, a Snowy Egret, a Spotted Sandpiper, a Yellow-rumped Warbler, a Say's Phoebe, and a Black Phoebe without turning my head. The Say's Phoebe posed for me (left). Other birds I saw included Least Sandpipers, Marbled Godwits, a lone Black-bellied Plover, the Heermann's Gulls, American Crow, and American Pipit. One strange sight was numerous Great Egrets apparently standing on the water, well offshore. They were actually standing on kelp mats, hunting for fish. I've never seen Great Egrets out at sea before.

For information about bird watching in Sonoma County, see my Website Sonoma County Bird Watching Spots.
Posted by Colin Talcroft at 11:55 AM No comments: 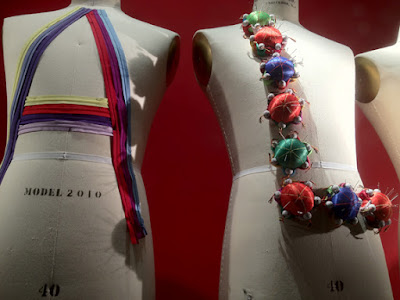 I was in San Francisco on New Year's Eve. Oddly, Union Square was completely closed off and nothing was going on. I enjoyed looking at some of the store windows, though. I particularly liked this one. Found art.


For more found art, see my blog Serendipitous Art.
Posted by Colin Talcroft at 10:33 AM No comments: