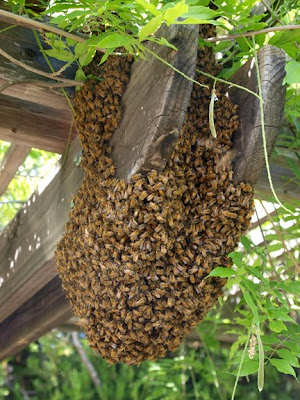 The bees decided to swarm today. I nearly walked into a huge ball of bees hanging from the arbor that supports the hammock. Usually bees hang out to congregate near the hive they are leaving before flying off to a new hive site, but I get the feeling they were planning to stay, as they had already begun to lay down wax on the wood for new comb. It's amazing how fast they work. I was surprised also by the number of bees in the swarm. I dropped the box I was capturing them in because it got to be so much heavier than I expected, and I got stung several times on the ankle in response--the first time I've ever been stung handling a swarm. My ankle is swollen and itchy already. Still, I seem to have got the queen in the box. I have no room for a second hive, so I aim to sell this swarm on Craig's List. Any takers?
Posted by Colin Talcroft at 5:30 PM No comments: 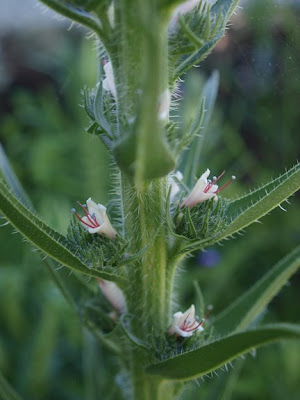 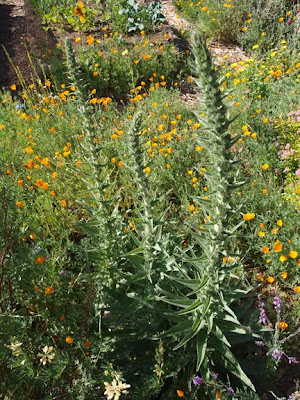 First blooms today on some of the many Echium boissieri plants in the garden, all of which are volunteers from seeds from a single plant I put in three or four years ago. Like many of the Echiums, this is a biennial, forming a flat rosette of leaves in the first year and then throwing up a giant spike of flowers in the second year, before dying. The original plant came from Annie's Annuals (in Richmond, California) via Cottage Gardens, in Petaluma, California, but neither source has had this species for several years now, as far as I can tell.
Posted by Colin Talcroft at 4:55 PM No comments:

I have more or less finished writing my second string quartet. I'm fairly happy with it, but need to tweak the dynamics, particularly in the third and fourth movements. I wish the notation software were better at reproducing dynamics in playback mode. Without the feedback of human performers, it can be very difficult to judge what's going on sometimes.
Posted by Colin Talcroft at 11:25 AM No comments: 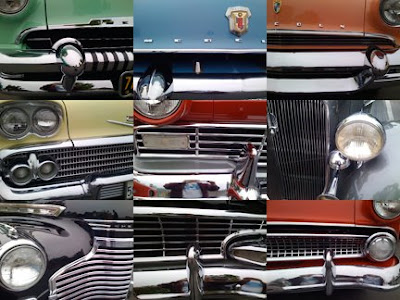 This Saturday, the 22nd, is the annual Classic Car Show at Oakmont.

I'll be showing my 1978 Alfa Romeo Spider again this year.
Posted by Colin Talcroft at 5:58 PM No comments:

Miscellaneous: When Speech Recognition Software Gets it Wrong

I use speech recognition software in my work and sometimes to do other writing (dictating this blog entry, for example).  It's usually quite accurate, and when it's not, it's my fault as often as not.  Generally, it spews out complete nonsense when it doesn't understand. Sometimes, however,  a mistake is intelligible--if not quite appropriate in a business document. Today, I laughed out loud when the software wrote this for me:
"In that year, the company had 23 consolidated subsidiaries and employed a total of three cows and 126 people."
Um, that should have been "a total of 3,126 people."
Posted by Colin Talcroft at 4:50 PM No comments: 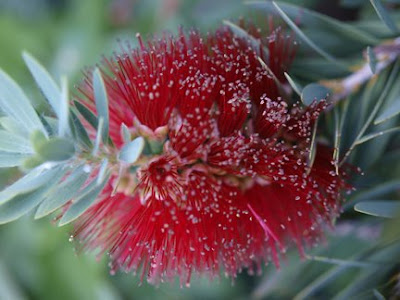 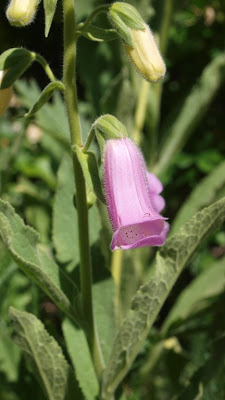 First blooms today on the low-growing foxglove by the back wall. This is a perennial foxglove, Digitalis dubnia, rather than the common garden foxglove (Digitalis purpurea). Also blooming today is the dwarf bottlebrush on the side of the house.
Posted by Colin Talcroft at 3:50 PM No comments:

Just to note the rebirth of the Hubble Telescope today. Sounds like the repairs went well. I look forward to new images.
Posted by Colin Talcroft at 10:40 PM No comments:

Miscellaneous: Michelle Obama on the Arts--How Sweet It Is

Came across this news story today suggestive of the Obama administration's genuine support for the arts. This kind of activity is indicative of such a refreshing change in attitude from what we put up with during Mr. Bush's tenure.

Michelle Obama was re-opening part of the American Wing at the Metropolitan Museum of Art in New York today. Coincidentally, the last time I was there former First Lady Jackie Onassis visited what was then the new American Wing. I was on my way to see the galleries (as she was), walking. I had stopped at the corner of 82nd St. and Fifth Ave., waiting for a light to change. Her limousine pulled up on 82nd St., right next to me. Surprisingly, her window was down. There she was, looking at me. When would that have been? Fifteen years ago? Twenty years ago? The light changed. The car turned left onto Fifth Ave. and it was gone.
Posted by Colin Talcroft at 10:14 PM No comments: 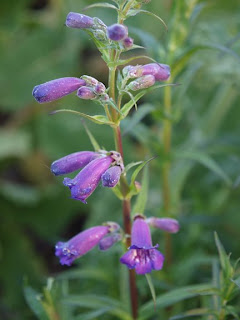 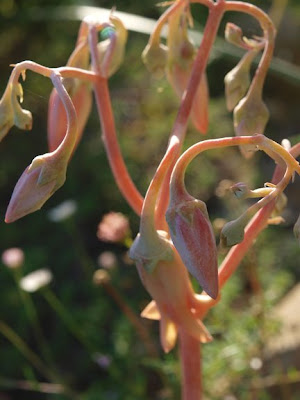 First blooms today on the "Sour Grapes" Penstemon under the pear tree and on the succulent with the wonderful pendant flowers--the name of which I can't remember.
Posted by Colin Talcroft at 8:13 PM No comments:

Heard an interesting Santa Rosa Symphony concert today. On the program were Nachtgesang, from Wagner's Tristan und Isolde, Ravel's Piano Concerto in G Major (the soloist was Cecile Licad), and Three Tâlas from Turangalîlas for Piano, Ondes Martenot, and Orchestra, by Olivier Messiaen. Soloists in the Messiaen were Miles Graber on the piano and Mary Chun on the Ondes Martenot. There was a pre-performance talk about the Messiaen piece by Dr. Robert Winter, and, apparently a pre-concert discussion of the Ondes Martenot, but I missed hearing that. After the concert I went up on stage to talk to Mary Chun, so I got the gist of what she had said earlier about her rather rare instrument (according to the program, she is only one of two people who play it in the United States). She said she is one of about 15 players in the world. For more information, Google awaits you. It was intriguing, to say the least. At times it sounded like a theremin, at times like a cross between an organ and a penny whistle. At other times it sounded like a trashcan lid.
The talk before the Messiaen was novel.  It wasn't objectionable, and clearly the audience enjoyed it, but it was a trifle long and it could have been better  introduced. It wasn't clear who the man was or why he was talking at first--not everyone reads the entire program before the concert starts.
The Wagner was indifferently played. I'm not sure I would have liked it even if it had been played well.
I thought Licad good in the Ravel, but the orchestra wasn't quite up to backing her, particularly in the first movement. The orchestra played quite well, I thought, in the second and third movements.
The Messiaen was interesting, but it's not a piece I'm familiar enough with to really comment on. The range of sounds it includes is remarkable. That alone made it interesting, and it was a treat to hear a live performance of an instrument as obscure as the Ondes Martenot. I applaud the Symphony for this bold programming choice.
Posted by Colin Talcroft at 7:41 PM No comments: 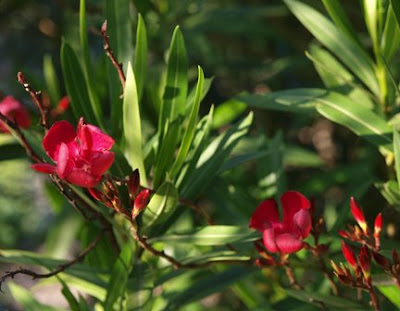 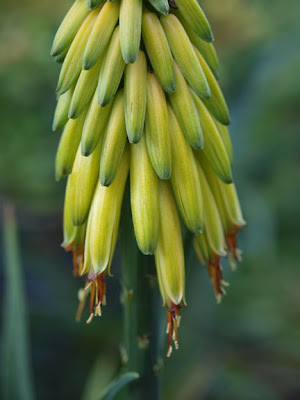 First blooms in 2009 on the large Aloe striatula under the kitchen window and on the large red oleander across from the deck. The flowers of the Aloe look rather like bunches of half-ripe bananas.
Posted by Colin Talcroft at 7:39 PM No comments: