I'm always excited to find an Alsace Grand Cru at a reasonable price. I love these wines and they are usually expensive and hard to find. This one is not as good as some Grand Cru wines I've had from Alsace, but it's very good wine and a real bargain at only $7.99 a bottle at the Santa Rosa Grocery Outlet. This Riesling would normally sell in the $35-$40 range. I've delayed posting this a day because I wanted to go back for a case. If there's any left after you've read this, go snap it up. Recommended. Brief tasting notes follow.

A medium, slightly green-tinged straw color. Distinct Riesling "petroleum" scents. Hints of honey on the nose. Clean and attractive nose overall. A bit distant at first on the palate. Delicate, but with extraordinary length. Bright sappy flavors initially, then rather austere on the mid-palate (with the acidity momentarily taking over from the fruit flavors), but the very dry mid-palate is followed by a delicate, honeyed sweetness offset by a more subtle acidity that lingers and keeps things interesting on the finish. At the very end, the wine is then slightly richer again, although the overall impression is of a steely, restrained fruitiness that just suggests sweetness. With a little time, begins to suggest hazelnuts. Excellent value.
Posted by Colin Talcroft at 9:40 PM No comments: 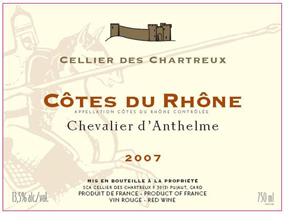 Always on the lookout for a good Côtes du Rhône, I tried this example from my local Grocery Outlet. Brief tasting notes follow.

A nice, deep, plummy red. Vaguely suggestive of cassis on the nose, at least at first. Some meaty scents. Later began to suggest vanilla and violets. Fairly dry and tannic initially on the palate, but rather light-bodied at the same time. Has a little fruity sweetness on the mid-palate, but the flavors fall off fairly rapidly--at least that was my first impression: With a little time and with food, this began to seem more interesting, gaining a little presence. Eventually it acquired a nice peppery scent, suggestive of Syrah. Not of any special interest, perhaps, but typical Côtes du Rhône and fairly priced at only $5.99 a bottle at my local Grocery Outlet (Santa Rosa, California). Although, I probably won't go back for more, this is decent, everyday wine.
Posted by Colin Talcroft at 9:14 PM No comments:

I attended the Sunday, May 13 performance of a series of three concerts by the Santa Rosa Symphony conducted by Bruno Ferrandis, featuring the conductor's brother, Jean Ferrandis, on Flute. The program opened with Debussy's Jeux (poeme danse-ballet) for Orchestra. Ferrandis played the Mozart Flute Concerto No. 2 before intermission and Ibert's Concerto for Flute and Orchestra afterwards. The program ended with Ravel's La Valse (poeme choréographique) for Orchestra. 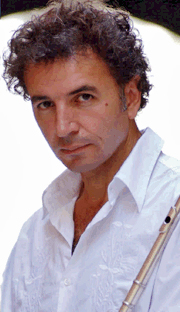 The Mozart concerto was something of a disappointment as well. It was competently played, I suppose, but lacked any real sparkle. Ferrandis (the soloist) seemed not fully engaged. The flute sounded thin and distant. The whole came across as rather bland, despite Ferrandis's exaggeration of the dynamics (Ferrandis, the conductor, that is). The Ibert, however,was nicely done--played with verve and enthusiasm. I got the feeling that Jean Ferrandis was much more in his element playing a modern French piece than playing the Mozart. Following the Ibert concerto, which the audience received with rather more enthusiasm than it did the first half of the program, Jean played an encore, which sounded like something from Debusy's Prelude to The Afternoon of  a Faun.

The Ravel was enjoyable but not wholly satisfying either. Ferrandis, the conductor, failed (in my opinion) to fully exploit the internal contrasts of the piece and he took the ending at what seemed an unnecessarily rapid and accelerating tempo.

Yesterday will have been my last concert in the Luther Burbank Center (or the Wells Fargo Center for the Arts as they insist on calling it). The Santa Rosa Symphony will start next season as the resident orchestra at the new Green Music Center. I very much look forward to hearing the new hall.

Photo of Jean Ferrandis (uncredited), from the Santa Rosa Symphony website.
Posted by Colin Talcroft at 3:34 PM No comments: