The 2011 Cabernet is mostly done fermenting. The cap is no longer rising, my punch-down tool has started sinking into the liquid (rather than riding on the cap), and the liquid tastes like wine--there is no longer any trace of sweetness. Just to be sure, I tested the wine using my hydrometer and got a specific gravity reading of 0.996, which indicates fermentation is mostly finished. I will probably press the wine tomorrow, although I had planned to bottle the 2010 Cabernet tomorrow. We'll see if there's time to do both.

I crushed the Cabernet grapes on October 24 and inoculated them with yeast on October 28, so the fermentation took only eight days, although the wine has been on the skins for 12 days now. Eight days is faster than some fermentations I've done, and usually at warmer temperatures (because earlier in the year). I'm not sure why this cooler fermentation was shorter, but every fermentation is different. 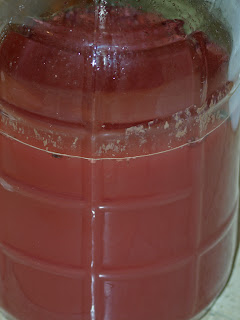 The Sangiovese rosé continues to bubble gently. Fermentation appears to be continuing. The intense red of the liquid just after pressing has softened considerably. The wine is now a nice medium pink, but it's hard to  know exactly what color the wine will be until the CO2 gas stops rising and the suspended matter begins to fall out of the wine. So far, the rosé has been fermenting for 12 days.
Posted by Colin Talcroft at 11:14 PM No comments: 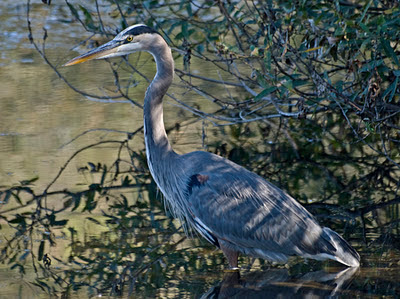 I took a quick walk around Lake Ralphine today, in Santa Rosa's Howarth Park. The winter ducks haven't arrived yet, although there were about 100 Coots on the water. I watched a Belted Kingfisher dive for fish and got to see a pretty Townsend's Warbler, but the highlight was this handsome Great Blue Heron fixated enough on his fishing to let me get rather close. 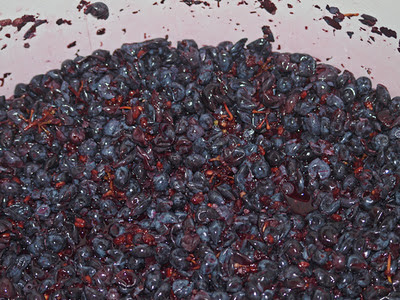 Our Sangiovese rosé is now in its fifth day of fermentation. The container is fizzing lightly and a great deal of the deep color present initially has already disappeared to leave behind a pretty pink. The color of the finished wine won't be apparent for another week or two, but so far it looks good. The fermentation is proceeding slowly (by design). I expect it to last another seven or eight days at least.

The Cabernet Sauvignon/Franc is also undergoing fermentation, soon to enter its third day. I added the yeast on the morning of Friday, the 28th. I'm punching down the cap of skins that rises on the surface four times a day, as I usually do. The liquid is a deep, inky purple. As I did a four-day soak before adding yeast, the skins have been giving up color for nearly a week. Fermentation will probably last another eight days or so. The 2011 wines are moving along nicely.

Posted by Colin Talcroft at 8:02 PM No comments: