A busy three days. Took a circuitous route from Pouzolles in the south back to Paris, by way of St. Emilion (near Bordeaux), the Cotentin Peninsula, the WWII Normandy landing beaches, and Bayeux. The northwest is the only part of France I’d never been to before—which is not a coincidence. Brittany and Normandy are the only parts of France that have no major wine-producing areas. Normandy is the land of galettes (savory buckwheat crepes) and cider, both of which are quite good. In Bayeaux, had an excellent galette Normande, with blood sausage, Camembert, and apples. I had hoped to stop briefly in Gauguin’s favorite Brittany town of Pont-Aven, but time didn’t permit a diversion so far west. 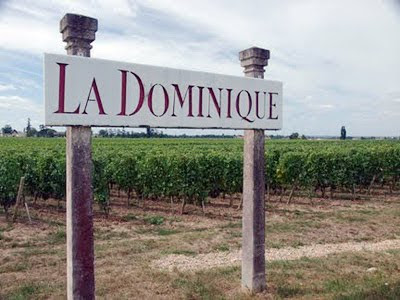 There was little time for much lingering anywhere, really. I just wanted to see the vines around Bordeaux again. Drove through St. Emilion, along the road that separates the vineyards of La Dominique and La Conseillante. La Dominique has long been one of my favorite St. Emilion wines. Drove also through some of the satellite villages—St. Georges and Montagne, in particular--and Pomerol. Another veritable sea of grape vines. The grapes seem late. They are just beginning to take on color.
I took the opportunity of being in a wooded area (the hotel was just on the border of Lussac and Puisseguin) to get up at around 6:30 and take a walk along a strip of trees and brush between vineyards. I got a glimpse of a Green Woodpecker and got a good look at what was either a Melodious Warbler or an Icterine Warbler—still working on that identification—but that brings my total of birds identified on this lengthy trip in Europe to 69, of which 59 have been first sightings for me. 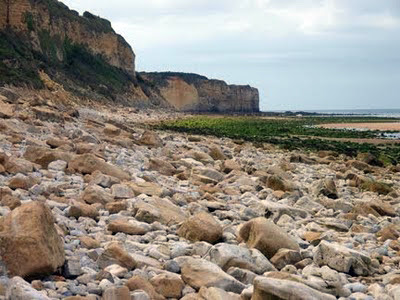 Visiting the beaches in Normandy gave me a sense of the scale of the invasion I’ve never had before. I had not realized how big the distances are. Utah Beach is a good 15-minute drive west and north of Omaha Beach. Omaha is a comparable distance west of Gold, Juno, and Sword, which are closer together. Omaha Beach today looks like any other strip of beach on the north coast. It’s hard to imagine the events of D-Day in what is now such a peaceful place. Utah Beach has a number of fairly intact gun emplacements and pillboxes, which gives it a more visceral impact. 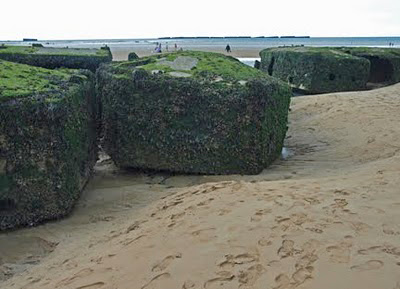 Perhaps most interesting was Gold Beach, near Arromanches, which was one of the two British sectors. Here the remains of Mulberry B, one of the two temporary harbors put in place to supply the Allied beachhead are easily visible. A row of prefabricated concrete caissons still sits on the beach (photo). Large concrete structures built offshore are intact enough to see where the enclosed area was (at the horizon in the photo). The peace memorial museum in Caen puts everything into perspective. Practicalities meant that we toured the beaches from west to east, but it would probably be ideal to do the opposite, visiting the Caen museum first.
Bayeux, with its beautiful cathedral and the Bayeux Tapestry (which is actually an extraordinary piece of embroidery) were a welcome relief from the somber monuments that are thick on the ground in Normandy (I also saw the famous church in St. Mere Eglise and visited the American Cemetery above Omaha Beach—this last again a strangely quiet, peaceful, and beautiful place so close to the site of past carnage below it on the beach). I literally ran into the town of Bayeux, hoping to get a photograph or two of the cathedral façade in the beautiful late evening light after clouds had cleared. I very much liked this building—right up there with Pisa in terms of its architectural interest, and from about the same period. It was started in the 11th century, built in Norman Romanesque style but later considerably embellished with gothic decorations as the gothic style moved west and south from the Isle-de-France region. The original square towers can still be seen under the gothic spires that were added later. The vertical buttresses on the front of the towers were added to support the new spires. The decoration between the towers and elsewhere around the building, including the main west portal are all later, but the Romanesque building is there underneath it all. The entire town is rather well preserved. The Germans apparently left Bayeaux quickly, which spared it the destruction of so many other towns and villages in the area. 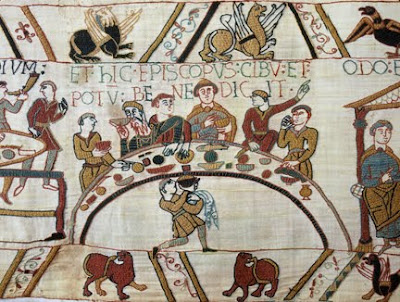 The Tapestry was wonderful. Having as a child heard my parents speak of their seeing it while traveling in France, I’ve always wanted to have my own look at it. It’s much longer and broader than I’d imagined. It has a wonderful rhythm. I'm sure I'm not alone in having particularly liked the scenes of eating and food preparation, the battle scenes with rows of overlapping horses, and the scenes with many ships setting off from shore. There was a lengthy wait to get in, but it was well worth it to see this extraordinarily well-preserved textile. The audio guide included in the admission price moves much too quickly (although you can pause it), but it is succinct and informative. An excellent museum. The photo here is one I took not of the original (which is forbidden--in this case rightly so; flash exposure would accelerate deterioration of the fabric) but of one of the plastic placemats they sell in the gift shop. The color of these is very close to the original (and much truer than that of the post cards for sale), and because of their large format, you can see the stitching at about life size. You wouldn't have known it was a plastic placemat if I hadn't told you.
Posted by Colin Talcroft at 1:41 AM No comments: 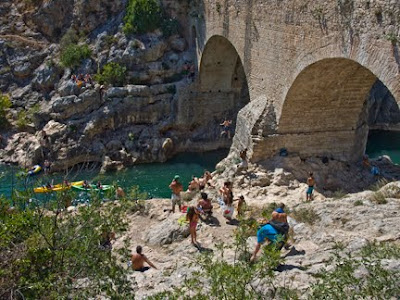 The past three days have been spent further exploring places within day-trip range of Pouzolles. Yesterday went swimming near St. Guilhem-le-Desert, spent the day before in Colliure, near the Spanish border. The day before that, visited St. Guilhem-le-Desert for the first time. Today leaving Pouzolles for Paris and the trip home. Details to follow as I get time to write.

St. Guilhem-le-Desert is a well preserved medieval town with a monastery as its centerpiece. The town is a UNESCO World Heritage Site and it is on the list of "The Most Beautiful Villages of France." Hadn't really intended to go, but stopped off on the way to somewhere else, lured by a sign referring to Pont du Diable, or "The Devil's Bridge," about which I knew nothing.

There is a substantial parking lot and remarkably modern and well equipped visitors' center above the bridge (selling local produce and with a wine-tasting bar, information center, gift shop, and clean toilets), a fair walk from the bridge  itself (which is not visible until you're right on top of it). Having parked, not sure what to expect, I was reminded of stories of people lining up in the old Soviet Union to buy things without knowing what was for sale, simply on the assumption that it would be something worth having if people were lining up for it (which wasn't always true, I've been told). The medieval arched bridge just outside town is rather spectacularly sited in a gorge. It turned out to be worth a look.

Doing a little research, I see there are "devil bridges" all over Europe. They are typically medieval and built in places remote or difficult of access requiring considerable technical skill to complete. A variety of legends attach to them, but they are usually said to have been built with the help of the devil--or, sometimes, in spite of the devil's attempts to thwart their construction. This one, spanning a deep gorge cut by the Herault River, was built in the early 11th century by Benedictines to connect the abbeys at Aniane and Saint Guilhem-le-Desert. It is part of the Way of St. James (El Camino de Santiago in Spanish, Chemin de St. Jacques in French) pilgrimage route to Spain, the medieval road to the Cathedral of Santiago de Compostela in northwestern Spain, where the remains of St. James are said to be buried. 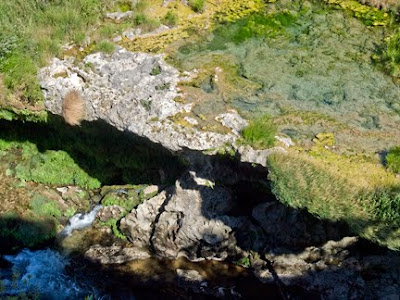 Two days later, we came back, this time lured by the swimming and kayaking. It was great fun jumping off the rocks along the gorge into the deep, cool water--deliciously cool. I dived from rocks perhaps 10 feet high. The local children happily jump from places two or three times higher. A few daredevils were jumping from nooks still higher in the rocks. The water must be at least 30 or 40 feet deep. Look again at the photo of the bridge above. Notice the boy in mid-air just to the left of the bridge support. He's jumping down to the level of the kayaks. 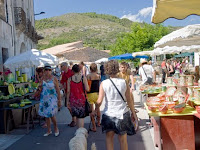 After swimming and kayaking, visited the town next door, St. Jean de Fos (there sure are a lot of saints and a lot of towns named after them in France), which happened to be having a pottery festival. Many potters live and work in the town. There was a wide variety on offer, mostly new work, but one or two vendors were selling antique pottery. I was tempted by old cheese cups--little glazed clay pots with holes in them for separating curds and whey, They were beautiful little sculptures, but what was I really going to do with these things? I resisted. 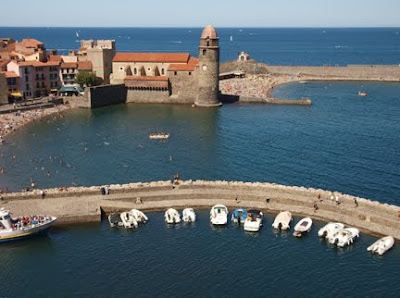 Colliure was beautiful. I wanted to see this little resort town nearly on the Spanish border because I have seen so many paintings of it--painted by Matissse, Derain, Dufy, Braque, Picasso, Foujita, Charles Rennie Mackintosh and others. It's easy to see what attracted them all--the beautiful beaches, the cafés overlooking the bay, the excursion ships, the fortifications, and the vineyards terraced on the hills above the town. Everywhere you look is a picture. The town's centerpiece is the lighthouse converted into a church (pictured). Parking is tough, but it's worth the walk into town. 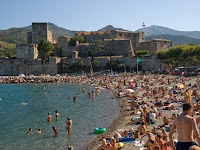 In Colliure, had some of the best ice cream I've ever had in my life. I had a scoop of vanilla with a scoop of violet on top--and it really tasted of violets. Rich, creamy, and powerfully flavored. Everything they had was delicious--I sampled a few other flavors. The shop is called Saveurs d'Antan. If you happen to read this and find yourself in Colliure, look for it. 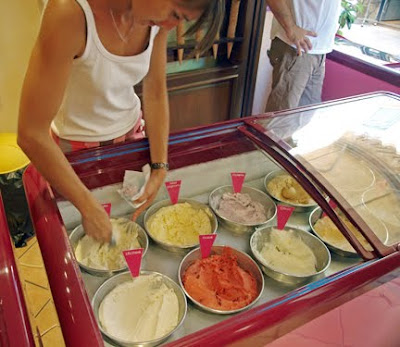 Posted by Colin Talcroft at 12:19 AM No comments: