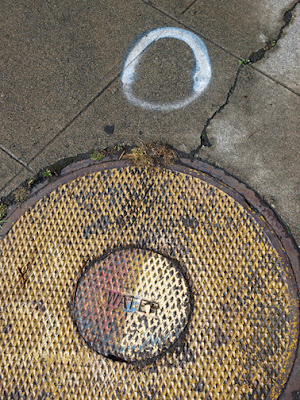 A water access cover with a stray paint mark nearby that somehow creates a tension transforming this little scene into art. The colored paint on the metal lid is part of its charm--not to mention the cracks and seams in the cement.... Found art. 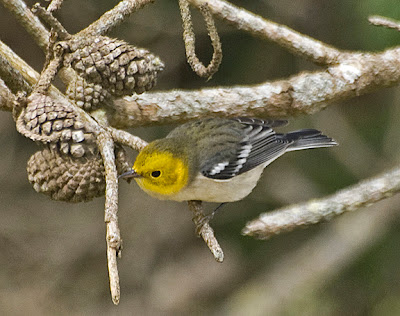 I drove out to Bodega Bay today on the spur of the moment, having heard that a couple of Hermit Warblers were present at Owl Canyon. I arrived in time to see one briefly before it flitted off (a first-fall female, I believe, because of the lack of black at the throat). This was my first sighting of this species. I got one decent shot before the bird left (above). A pair of American Redstarts was also reported at the same location, but I failed to see them--which is too bad, as that would have been two life birds in one day. I may run out there again tomorrow to try again. Other birds of note were a Peregrine Falcon flying by, a group of Wild Turkeys on the hill behind the canyon, and a Willow Flycatcher (I'm pretty sure).

A new show featuring printmaker Seiko Tachibana opened yesterday at The Ren Brown Collection, 1781 Highway 1, in Bodega Bay (Wednesday through Sunday 10-5). The Ren Brown  Collection, established in 1989, is one of the North Bay's best galleries. It features contemporary Japanese as well as local printmakers and offers work by well known local potters such as John Chambers. The gallery sells Japanese antiques, modern sculpture, and fine jewelry as well. Sophisticated stuff. As Mr. Brown puts it "Just because we're in Bodega Bay doesn't mean we have to sell seagulls on driftwood." The Seiko Tachibana  show continues through October 9, 2011, allowing plenty of time to plan a trip. 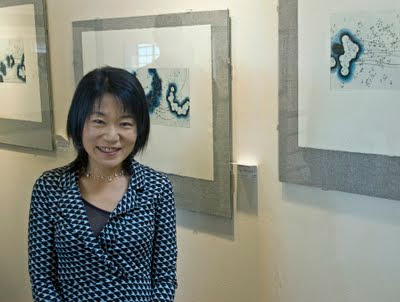 Tachibana was born in Japan but has long worked in the Bay Area, having completed a Master of Art Education degree at Kobe University and subsequently earned an MFA at San Francisco Art Institute. Her work is in the Los Angeles County Museum, the Legion of Honor, the Portland Art Museum, and other institutions, as well as in private collections throughout the US, Europe, and Japan. The show that opened yesterday features a recent series of etchings with aquatint called Blue Consonant, but includes paintings and prints from other series, and a small installation made specifically for the gallery space.

What unites these disparate works is a fascination with the circle or sphere. It appears in some form in almost every piece on display--in some work evoking the microscopic world of cells or molecules, in others the opposite extreme, suggesting planetary spheres or an eclipsed Sun. Not surprisingly, Tachibana explains that she is fascinated by all the creative forces of the universe, from the multiplication of single-celled organisms to the process of planet formation. Her work reminds us that the physics of a spherical boundary at the microscopic level is identical to the physics that operates in far-off galaxies as planets coalesce into spheres from dust and gas.

On a technical note, Tachibana is remarkably good at aquatint, a process that uses rosin dust during the etching process to create finely pitted areas of varying density in the printing plate, allowing tonal gradations in a process (etching) that lends itself more naturally to linear expression. Aquatint is difficult to control. Tachibana uses it masterfully and combines it with great skill in manipulating ink on the plate to create effects that mimic watercolor and other wet techniques.

Although Bodega Bay is a bit out of the way for San Francisco art lovers, there's much in the area to justify a journey. Try some of the Bay Area's best clam chowder at Spud Point Crab Co. (1860 Westshore Rd., Bodega Bay; 9-5, closed Wednesdays), have dinner at Terrapin Creek Café (1580 Eastshore Dr., lunch and dinner, Thursday through Sunday), or enjoy a glass of wine at Gourmet Au Bay (913 Coastal Hwy. 1; open every day during the summer 11-7), sitting on the deck overlooking the Bay--an excellent place to taste wine but also a good spot to watch shorebirds on the mud flats--and to watch people. Heading north on Hwy 101, take the Railroad Ave. exit, turn left onto Railroad Ave. and take the 2nd right, onto Stony Point Rd., until Roblar Rd. Go left on Roblar Rd. until you can take a right onto Valley Ford Rd., which is Hwy. 1. Hwy 1 winds west from here to the coast through pretty countryside--or you can do the Google Maps thing. The Ren Brown Collection is on the northern outskirts of the town of Bodega Bay in an attractive house with its own Japanese gardens and teahouse. Don't miss the topiary snail.