Miscellaneous: Things We Need Words For

Things we need words for: A missed answer caused by a misreading of the question or simply hitting the wrong button while actually knowing the correct answer on an easy online quiz promoted as difficult so that getting a high score on it will provide an ego boost.
Posted by Colin Talcroft at 2:51 PM No comments: 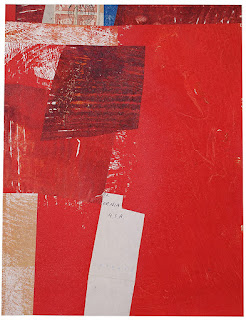 I normally don't use found paper much, but this incorporates a piece of an envelope mailed from Denmark. Postage stamps in collage are a rather tired cliché, but I hope I've used them subtly here--for their color mostly, rather than in an attempt to evoke some automatic nostalgic response or to suggest something foreign. They are simply a compositional element. Diagonals can be tricky--never stable. I rather like the way the lines slanted to one side here nevertheless seem grounded and, I hope, right.

Click on the image for a larger view. For more of my collage work, visit my website at http://ctalcroft.wixsite.com/collage-site
Posted by Colin Talcroft at 2:09 PM No comments:

Books I'm Reading: To Cork or Not to Cork 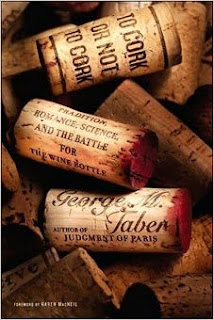 When I open a bottle of wine, I usually look at the cork, if the wine has a cork. I look at it mostly to see what might be printed on the cork, what condition the cork is in, and, secondarily, to see what kind of cork it is. I've noticed over the years that there are many types--natural cork, composite corks of various description, composite corks with natural cork disks on the ends, and a number of styles of plastic corks. Then there are screw caps. What's the ideal closure for a bottle of wine?

Everyone seems to hate plastic corks. My own experience with them has been negative--particular the kind that is a single block of molded or extruded plastic. They can be exceedingly difficult to extract and they are so stiff that it's virtually impossible to re-close a bottle with a plastic cork. Plastic lacks cork's resilience, and, according to Taber, plastic corks don't seal very well. They tend to allow air to leak into the wine.

The main problem with corks has been taint with 2,4,6-trichloroanisole, or TCA, and a few related chemicals, which, even in the tiniest quantities (as little as two to three parts per trillion is detectable by some people; virtually anyone smells the tell-tale mousy, cardboard scent of a tainted cork at about 12 parts per trillion), can ruin a bottle of wine--often many years after purchase, by which time the buyer has no recourse.

In his book To Cork or Not to Cork (Scribner, 2007), author George M. Taber looks at the causes of TCA taint and modern responses to problems with natural cork, weighing the pros and cons of each approach.

According to Taber, a consensus seems to have emerged that screwcaps in many instances make much more sense than corks, especially in wines intended for early consumption and as long as winemaking techniques take into account the way different types of closures affect aging; under a screwcap, wine gets very little oxygen, making it vulnerable to reduction effects over long periods of time, whereas plastic corks (and bad natural corks) don't seal well, causing the opposite problem, oxidation. The advantage is that screwcaps can't be tainted with TCA. That said, cork continues to be favored for it's aesthetic qualities, especially for more expensive wines, and in certain markets. France, for instance, steadfastly rejects screwcaps, while New Zealand has wholeheartedly adopted metal closures, even for fine wines.

The proliferation of composite corks made from scrap cork (the bottle-closure equivalent of particle board), plastic corks, and screwcaps has made natural corks better. A complacent cork industry (with a centuries-long monopoly on wine closures) was finally forced to modernize around the end of the last century when it started losing significant market share to alternatives. Cork oak growers have consolidated, cork manufacturers have upgraded equipment to eliminate contact with the ground and other wood products during curing (that can harbor TCA), and, most importantly, eliminated the use of chlorine to bleach cork, as the presence of chlorine has been found to promote formation of TCA. Non-chlorine cleaning and bleaching have also allowed the manufacture of better composite corks, which allow use of waste from production of natural cork stoppers.

So, what's the best way to close a bottle of wine? As is so often the case, the answer is complex. Taber does a good job of presenting the arguments for and against putting corks in wine bottles in prose that never seems heavy, despite the somewhat dry subject matter. To Cork or Not to Cork is perhaps not for everyone, but it's likely to entertain and inform anyone with a serious interest in wine or anyone afflicted by the sort of intellectual curiosity that makes just about any subject worth reading about.
Posted by Colin Talcroft at 1:59 PM No comments: