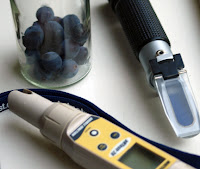 I tested a representative sample of the Cabernet Sauvignon and Sangiovese grapes today. This past week of hot weather looks likely to salvage what was looking like a rather dismal harvest this year. There is a minimum of mold on the grapes--despite the long, wet spring and cool early summer (with the last rain in the first week of June, I believe), and, despite the short spells of very hot weather this week and in August (with temperatures spiking well into the 100s for a day or two), not too many berries look withered or sunburned (although the Sangiovese has suffered more in this regard than the Cabernet).

The Cabernet grapes tested at 21.5 brix and a pH of 3.28. A sugar level of about 24-25 brix and a pH of around 3.4 would be ideal. We may get that if the weather holds for another week or so and if it cools down a little bit. The seeds still don't look quite mature--mostly medium brown with a hint of green and with a fair amount of pulp sticking to them.

I've watered the grapes only twice this year (normally three or four times), once for six hours in mid-August and once for three hours on September 24 or so. If I had been here over the summer to water once in July, things would have been better, but I was in Europe.

The Sangiovese grapes tested at only around 16 brix--quite low for this time of year. I suspect these will have more of a problem getting fully ripe than the Cabernet. I'd like them to get to at least 20 before harvesting. Around 22-23 is ideal for rosé. We will be making only rosé from the Sangiovese grapes this year in any case. The seeds look very mixed--some are quite brown, hard, and crunchy, others are quite green, and that about sums up the Sangiovese grapes. I think the low brix level is, as much as anything, because of very uneven ripening. We will have to wait and watch, but the Cabernet may be ready for picking in a week to ten days, the Sangiovese in perhaps two weeks. 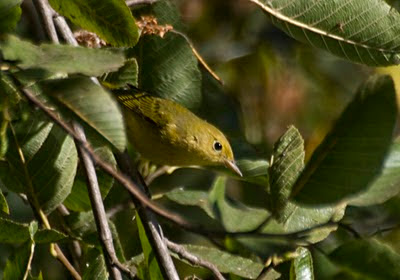 I joined a group this morning for a walk around Spring Lake, in Santa Rosa. There were no unusual warblers, although Yellow Warbler was present in abundance. The highlights were seeing the American Bittern that is often present, seeing a Red-breasted Sapsucker, and seeing a fair number of ducks in eclipse plumage--a Green-winged Teal, two Northern Pintails, and two Shovelers. Also, there were Cedar Waxwings everywhere. The Yellow-rumped Warblers and Dark-eyed Juncos (see below) and the ducks are all the first I've seen this season. Pictured above is a Yellow Warbler. Below is the Red-breasted Sapsucker. 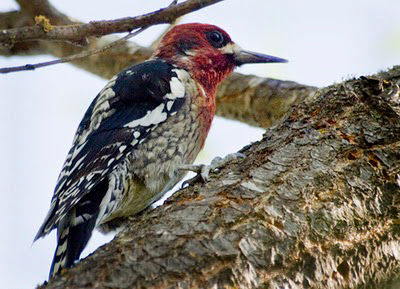 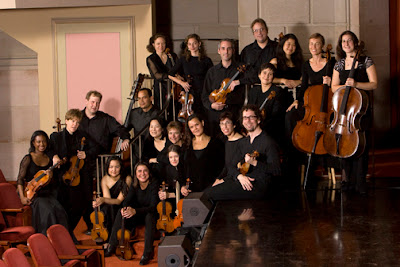 I just got home from a concert by the New Century Chamber Orchestra (NCCO) in San Rafael, a group that I've been trying to hear for some time. My next door neighbor, a season ticket holder, had extra tickets to this performance and finally I was free at the right time to go along. I'm very glad I did. To say I was impressed is an understatement. I'm about to effusively praise this group. I apologize in advance to everyone that already knows how good they are.

The featured performer was bassist Edgar Meyer. The program included Giaocchino Rossini's Sonata in G Major, Giovanni Bottesini's Concerto for String Bass No. 2 in B Minor, Chamber Symphony in C Minor (opus 110a) by Dimitri Shostakovich (arranged by Rudolf Barshai), and the adagio from Mahler's Symphony No. 5. I rarely come home from a concert so excited that I don't know where to begin. I suppose the beginning is as good a place as any--the Rossini.

The Rossini was not a piece familiar to me, and I've never particularly warmed to Rossini, so I can't speak from any prior experience here, but I enjoyed this. The music is not in any way profound, but it's full of energy and charm. The first movement relies (quite successfully) on a generous helping of light-hearted breeziness. The middle movement is a bit weightier and a trifle introspective. The bass part stands out here, and that's why it was chosen for the program on an evening featuring the string bass. The group's Principal Bassist Anthony Manzo handled the part with aplomb. The final movement, a fast-paced rondo has an almost comic feel in places--it's a romp that makes you want to giggle at the end just as much as you want to applaud. The ensemble seemed a trifle rough in spots playing the Rossini, but this was a warm-up piece and that's about the worst thing I have to say about the entire evening. 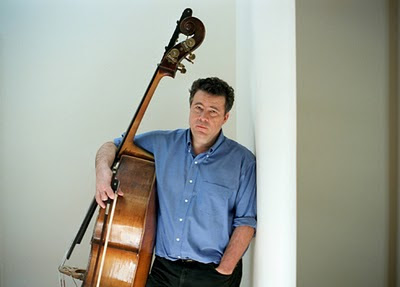 The Bottesini concerto was equally unfamiliar--more so, actually; I can't say I'd even heard of Bottesini until tonight. But what does that matter? The tightness of the ensemble was phenomenal. Meyer was breathtaking. I can't imagine a better performance of the piece. Much as I love the Shostakovich Chamber Symphony (a piece of music I do know), I'd have to say the Bottesini was the highlight of the evening. "Effortless perfection" is the phrase that kept popping into my mind. Too often one sees performers just going through the motions. What a pleasure it is to see a group of musicians so intensely concentrated and having so much fun at the same time. The NCCO performers seemed telepathically connected with Meyer and with one another. How thrilling to watch musicians that so clearly care about getting it right. One can easily imagine Bottesini in his grave as moved I was to hear so successful an interpretation of his ideas. This is the sort of concert one remembers for a lifetime. The Bottesini alone was worth the extremely reasonable price of admission.

Music director Nadja Salerno-Sonnenberg took to the stage briefly before the Bottesini to introduce the guest performer (Meyer) and let us know that she had persuaded him to do a solo piece before the Bottesini (is that called a precore?). He played the Prelude from Bach's Cello Suite No. 2. I wish that Meyer had taken a moment to tell us about his instrument. I did a little searching on the Internet and I'm guessing that he was playing a 1769 bass made by Johann Baptiste Gabrielli. It's so rare to hear a bass in isolation like this that it's hard to compare with other instruments, but I thought it sounded remarkable--appropriately brash in the low register, nicely gritty in the mid-range, and amazingly sweet and clear all the way up to the bridge on the high string. I stress that I'm no expert in these things, but it sounded like a very fine instrument to me. I was interested to see the inlaid markers for hand positions on the fingerboard. I suppose these have a technical name, but I don't know what it is. I've never seen a bass marked in this way. Again, it would have been nice if he had talked a little about the instrument.

Meyer played an encore as well--his own composition, entitled Pickles. I can't begin to describe it, but watching him play it was as entertaining as the piece itself. Meyer is tall and imposing. I kept thinking that he looked like a cross between conductor James Levine and actor Peter Boyle. (Probably just me.) In his crisp white shirt and bow-tie, he suggested a big city bartender with a wickedly wry sense of humor. Even during the more serious Bottesini, I half expected him to break out laughing, unable to contain the inner joy. During the encore, this playful side of the man got a chance to show through. Watching him undulate like a snake as his fingers slid up and down the fingerboard, I was mesmerized. The NCCO performers on stage seemed as rapt as the audience (during this encore as well as during the solo passages in the Bottesini). Pickles was a very entertaining end to the first half of the program. The audience was palpably excited in the lobby during admission.

Modern music, because it is so abstract, has to be executed with great precision to be successful--or so it seems to me. The Shostakovich Chamber Symphony in C Minor seems a case in point. The NCCO handled it brilliantly. The music was furious where it must be furious, and, where it needs to be, it was underlaid with stretched, seemingly endless, linear notes. The hand-offs from one section of the strings to another were seamless, with director Salerno-Sonnenberg making only the subtlest of indications. For the most part, the string sections were "talking" to one another on their own, weaving a wonderfully coherent whole, and that is just how it ought to be, with a perfect tension between the details and the long lines of the piece.

I have four recordings of the Mahler 5th on CD, and at least one on LP--Rattle, Barbirolli, Sinopoli, Solti, and Abravanel conducting--but I've always been partial to the Maurice Abravanel recording I own. The performance of the Adagio this evening was every bit as good as any of these. What can I say except that it seemed virtually perfect? The Abravanel Mahler recordings with the Utah Symphony were made in the 60s, I believe, in the Mormon Tabernacle (released on the Vanguard label; I bought my copies as cut-outs, or remainders, in the late 70s and early 80s). The sound of the Tabernacle is part of their great appeal. I didn't expect the auditorium at the Osher Marin Jewish Community Center to be especially good acoustically, but, remarkably, the sound seems quite true--despite having been designed as an auditorium rather than a concert hall (or perhaps events such as these were taken into account in the original planning?--I don't know). My seat, at Table 31, near the middle, may have had something to do with it. Nowhere did the sound seem muddy. Every instrument was clearly audible and each seemed to come from exactly where it ought to have been coming from. I heard no distortion. The Mahler was a wonderful end to a wonderful evening.

If only the audience had been better behaved. My neighbor tells me that tonight was atypical. I hope that's true. Velcro here, cellophane there. People talking. Dropped glasses, purses opening, coughs, suppressed sneezes, and kicked cans all made their appearances (the seating is at tables; patrons are allowed to bring in food and drink, which is a good thing). But, please, is quiet really that hard to achieve? Needless to say, the somewhat undisciplined audience was no reflection on the performers. I'm very glad I went tonight. I look forward to going again soon.
Posted by Colin Talcroft at 11:10 PM No comments: