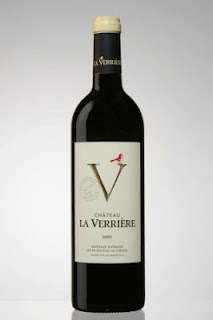 I picked up this wine recently at my local (santa Rosa, CA) Costco for a modest $8.49 a bottle. I had high hopes for it as it was a gold medal winner (usually not a bad indicator in the case of less widely known Bordeaux wines) and because the 2009 vintage was generally good in Bordeaux. I wasn't disappointed. This is the kind of inexpensive but tasty little Bordeaux that I like to buy by the case and tuck away for future use on occasions that call for something solid but not extravagantly expensive. By the time seven or eight years have passed, they're usually markedly better than when new--and I always kick myself for not having bought more. Brief tasting notes follow.

A youthful-lookng, inky, deep purple-red. Fairly closed on the nose at first, but the initial impression was of an appealing, not unrefined, well-made wine. Initially the nose offered distant hints of roses and leather, but not a lot else. The palate was similarly restrained at first. The wine seemed flavorful but light--although a core of attractive fruitiness was apparent from the outset (this masked somewhat by light, soft tannins). A wine I'd call smooth, well-bred, attractive, and easy, but not without character. It gave the impression of being likely to get better with age, and, with a little time standing in a decanter, the wine started to develop a little more complexity. I began to get cocoa on the palate and there were hints of cherries and almonds on the nose. There was also a slight suggestion of iodine. While this wine may not appeal to palates raised on fatter, fruitier, more alcoholic California wines, it will be appreciated by those who know and love the wines of Bordeaux. I'd give this at least another three to five years in bottle before drinking it again, and I suspect it'll be tasty ten years from now, if well stored. If you drink it early, decant it and give it an hour or so before indulging. Not profound, but well made, tasty Bordeaux. Recommended.

I have no financial connection with any producer or retailer of wine.

Mel Ramos is a name I must have heard before. I looked him up in the textbook I used in college in a history of American art class (Hunter and Jacobus, American Art of the 20th Century, Abrams, 1973) and there he was, with penciled-in margin notes nearby. I can't say that I remembered him, though, so I approached the current Ramos retrospective at Sacramento's Crocker Museum of Art with no baggage--either positive or negative ("Mel Ramos: 50 Years of Superheroes, Nudes, and Other Pop Delights," through October 21, 2012).

The work is certainly eye-catching. The canvases are big. They are bright. The compositions are stark--usually a single large figure against a plain background. The superheroes lack the commercial artifacts that accompany most of the nude figures (a typical nude combines a Playboy Playmate-style woman in, on, or next to something like a box of candies, a package of Cracker Jacks, a cigarette pack, or a martini glass), but even the nudes are rather simple compositions, and their backgrounds tend to be garish--flat planes in colors like mauve and apricot. 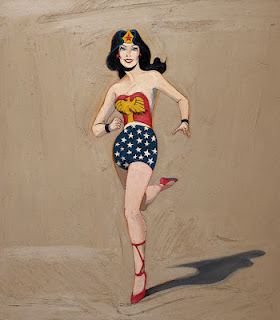 According to the gallery labels, Ramos became serious about painting while under the spell of the Abstract Impressionists, especially Willem de Kooning. Ramos, we are told, disgusted with his own slavish copying of de Kooning's style, eventually decided to paint what interested him, and that appears to have been comic book characters. The show begins with some of these early superhero paintings. It's a shame that at least a few of the painter's Abstract Impressionist works are not included. I left the exhibition curious to see what Ramos was doing in that earliest phase of his career.

"Wonder Woman No. 1" (1962, oil on canvas, Rochelle Leininger Collection. © Mel Ramos/Licensed by VAGA, New York, NY) is among the early superhero paintings. It has a naive simplicity, as do the other comic book heroes in the show. The comic-influenced works look precisely like what you'd expect from a man who enjoyed comic books and had recently decided in a moment of artistic frustration to simply paint what he wanted to without worrying about what others were doing. Having said that, I sense a certain disingenuousness here. Already at this period the Abstract Impressionists were moving away from a purely painterly style and beginning to add bits and pieces of the real world to their canvases; artists were already showing a fascination with the visual clichés--including comic book images--that became central to Pop Art. I suspect Ramos still had his eye squarely on trends among his contemporaries. 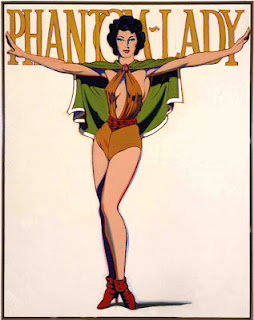 Whatever his precise thinking, "Phantom Lady" of 1963 (Oil on canvas, Leta and Mel Ramos Family Collection, © Mel Ramos/Licensed by VAGA, New York, NY) appears to have been a turning point--as the wall text in the galleries points out. With "Phantom Lady," Ramos combines the comic book hero with the airbrushed pin-up girl, a step toward the nude work that appears to have occupied him most consistently since this period.

With the nudes, Ramos would seem to have embraced the artistic mainstream again. The nudes show all the typical characteristics of full-blown Pop Art. They are not portraits of real women. They are portraits of photographs of women photographed in a style that already makes them a commodity. The addition of commercial artifacts as props adds a surreal note, but essentially they are a send-up of the American obsession with commercialism and with an artificial, smoothed over, enhanced notion of feminine beauty. 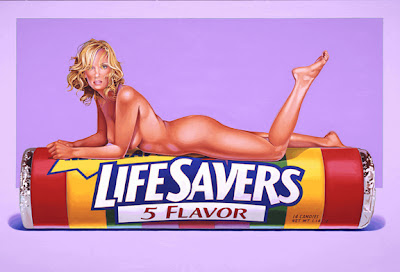 "Five Flavor Frieda: The Lost Painting of 1965 No. 47" of 2005 is a good example of the later nudes (2005, oil on canvas, Collection of Don Sanders, courtesy of McClain Gallery, © Mel Ramos/licensed by VAGA, NewYork, NY). The nudes are rather funny. A couple of the titles made me laugh out loud. I particularly liked "Monterey Jackie," a pin-up girl sitting on a large block of cheese, presumably Monterey jack. There is a light-hearted irreverence in the parody of the party stripper in several images in which the nude is emerging from a package of candy or from inside a banana, but I wonder if Ramos's jokes are funny enough to sustain decades of retelling, decades of variations on a theme. I enjoyed seeing the Ramos show, but most of the work seemed only superficially attractive without much to sustain long interest. The paintings (and one or two sculptures) reminded me of the sort of gaudy woman that is superficially attractive--a head turner--but with no personality, the sort of woman that doesn't sustain interest, the sort of woman that Ramos perches on his packages of candy and drops into his martini glasses like pickled olives.

More about paintings at the Crocker Museum of Art.

Images used by permission, courtesy of the Crocker Museum of Art.
Posted by Colin Talcroft at 1:07 PM No comments:

A couple days ago I got back from a short trip to the north--as far north as the Mt. Lassen area. On my way home to Santa Rosa I made an unplanned stop at the Crocker Art Museum, in Sacramento. I've rarely been in Sacramento before--I usually drive around it on the way to skiing at Lake Tahoe--so I've hardly done anything in the city. This, my first visit, was a short one, but I rather enjoyed myself. The museum was the highlight. 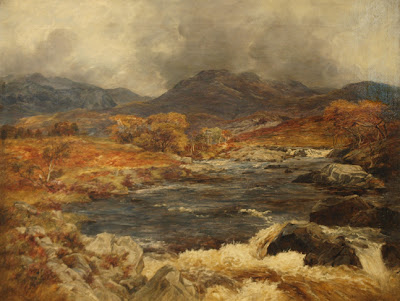 The Crocker collection is quite varied, including everything from antiquities to modern painting and photography, but perhaps strongest in arts of Oceania, in contemporary ceramics, and in California painters. There were quite a few good California landscapes on display, although I especially liked a landscape in Scotland entitled "On the River Minnock, Kirkcudbrightshire," by James Faed (1857-1920), a Scotsman (pictured above--the painting, that is, not the Scotsman). He's nicely captured the peaty brown water and the mist, although these may be hard to see in my photo here. 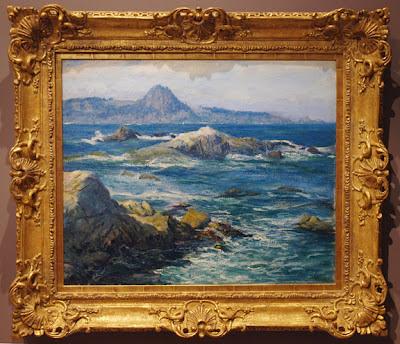 There were several good landscapes in the Impressionist style by Guy Rose (1867-1925), a painter I've never been aware of before. Apparently Rose was born in Southern California, the son of a California senator, but he spent more than 20 years in France (1890 to 1912), living near Monet's home at Giverney, having earlier studied at the California School of Design, in San Francisco, and at the Académie Julian in Paris. He is best known for the impressionist landscapes he did along the California coast after his return to the United States, including the one of the Monterey coast pictured above. 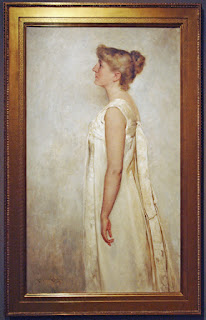 A number of interesting portraits caught my eye. I liked an 1889 portrait of Mary Blanche Hubbard by  Mary Curtis Robinson (1848-1931) who, like Rose, studied at the California School of Design, in San Francisco, and also at the Art Students League, in New York. The limited palette and the choice of a white dress against a white background immediately suggest Whistler. I liked the way the cloth of the dress is handled and the line of the arm and hand. 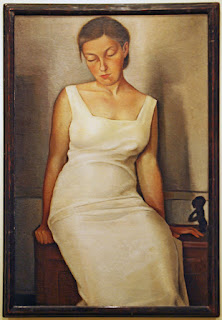 Another portrait I liked, "White Dress (White Nightie)" by Otis Oldfield (1890-1969) was similar in that it depicts a woman in a white dress (actually a white nightgown), but in a more modern style. I suppose this is actually quite derivative. The pose with the slightly tilted head and the closed eyes, the palette (with its use of rusty tones), and the small african carving in the corner all suggest the influence of Modigliani; and there is something Picasso-esque in the modeling, but I liked it nevertheless. According to the tag, Oldfield was criticized for painting the model (his wife) in a nightgown, so he changed the name of the painting to "White Dress" to defuse controversy at exhibitions. How times change. 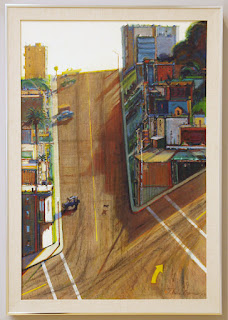 Among the more modern works in the collection there were some good paintings by Richard Diebenkorn and many by unfamiliar artists--too many to catalogue here. I enjoyed seeing a good example of one of the map-like San Francisco cityscapes Wayne Thiebaud (1920-    ) made in the 1980s. I like the odd perspective that gives the impression of looking straight down on the subject while seeing it from another angle at the same time, the odd angles of the streets and buildings and of the long shadows. This one is called "Street and Shadow."

The main special exhibition was a retrospective of work by pop artist Mel Ramos, a Sacramento native. Details here.

[Update: Also see this post about the Art-o-mat® in the lobby of the Crocker Museum.]

Posted by Colin Talcroft at 12:52 PM No comments: