I opened a bottle of the 2010 Windsor Oaks Vineyards Russian River Valley Rosé of Pinot Noir tonight and was pleasantly surprised--not that I had any reason to expect this wine wouldn't be good. I was surprised simply because I like rosé and I'm always happy to find interesting ones, and many are dull. Brief tasting notes follow.

A very pretty wine--as a rosé should be. A beautiful brandy-tinged pink. Very attractive in the glass. Scents of strawberries and watermelon with a hint of caramel in the background. On the palate, very much as suggested by the nose--a sweet, fruity impression at first, suggestive of watermelon and strawberries, but also with a slightly caramelized or brandied flavor as well. Hints of cherries and almonds on a fairly extended finish. Good balancing acidity. The label calls this wine "refreshing, but NOT SWEET" (emphasis theirs), but this seems quite sweet to me. Although the label says the winemaker has modeled the wine after the very dry rosés of Europe, I would call this an off-dry rosé, not a rosé that's been fermented completely dry. Despite that, I enjoyed it. It has character--although my taste in rosé is for significantly drier wines. Retail price about $16.

(I have no financial connection with any producer or retailer of wine.)
Posted by Colin Talcroft at 10:10 PM No comments: 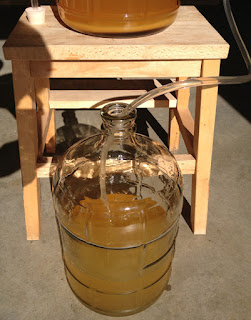 Yesterday, I racked the hard cider I'm making--the second racking ("racking" refers to taking the liquid off the lees and transferring it to a new container, part of the process of using gravity to clear it of sediment). I siphoned the liquid off the rather fluffy deposit at the bottom of the container and into a new, clean container. The first time I racked the cider I had to top up the vessel with nearly a pint of new liquid. I used fresh apple juice, which added sugar back that subsequently began to ferment again. That activity had mostly stopped.

This time, I filled the gap at the top of the container with finished local cider (only a small amount was required). I suspect I will have to rack my cider once more to get it completely clear, but it's mostly there. As the days have been a little warmer recently, I'll be watching for signs of ongoing fermentation, but I think it's mostly finished. After the final racking, I will bottle the cider and dose it with a touch of sugar to induce a final fermentation in the bottle, which should give it a little effervescence. I've never tried in-bottle fermentation before and never closed bottles with crown caps, but I will rely on the good guidance of the people at our local wine, beer, mead, cider, and cheese-making supply store, The Beverage People. Having just harvested about 60 pounds of honey from our (sadly dead) beehive, I may try making mead next.
Posted by Colin Talcroft at 9:14 AM No comments: 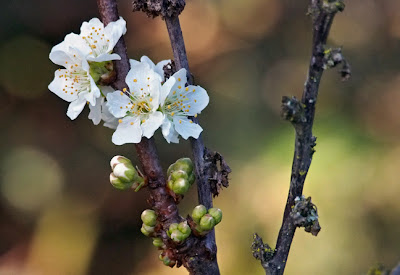 The first blossoms on the pluot called "Dapple Dandy" opened a couple days ago, on February 23. With no rain in the forecast, I'm hoping the tree will set some fruit this year. In recent years it has had almost none--but it  has mostly rained during flowering. The beehive has died, unfortunately, so the usual pollinators won't be around, but I'm hoping for the best. This post is, in fact, late because for the past few days I've been struggling to get the honey harvested from the hive; without the bees to attend it, it can't be left to sit (details of the honey harvest to follow).

Also, the first of the Tulipa bakeri tulips in the garden opened today (February 25). These have gradually dwindled in number and the number of blossoms on each plant has lessened as well. Probably time to plant new ones, or to fertilize the ones in the ground.
Posted by Colin Talcroft at 11:18 PM No comments: