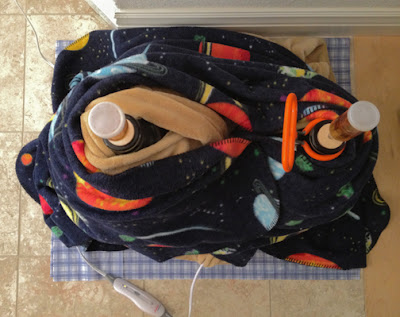 I inoculated our 2012 Cabernet Sauvignon/Cabernet Franc with malolactic starter on November 8, so today is day five. The problem with malolactic fermentation is that it's often hard to detect or to know when it's finished. There are sometimes outward signs (usually tiny, slowly rising bubbles, but just as often there isn't much to see). You can test its progress. The paper chromatography test that gives a definitive answer as to whether the bacteria have converted malic acid in the wine to lactic acid is not difficult or expensive, but I don't like the smelly chemicals involved. Recently I've been inclined to do my best to create the right conditions and then take things on faith. The right conditions means even, moderate temperatures. The malolactic bacteria thrive at around 70-75 degrees F, but that's not a condition common in my house at this time of year. As a result, I'm forced to wrap the carboys of wine in blankets with a small electric blanket between them in the hope of keeping the wine somewhat warmer than the ambient temperature in our house, which in November tends to be around 64-68 degrees during the day and as low as the high 50s at night when we turn off the heat. I generally give the wine about a month before testing (if I do test). I always tell people who ask that most of the work of making wine isn't work at all. It's waiting. And, here I am again, waiting.
Posted by Colin Talcroft at 12:12 PM No comments: