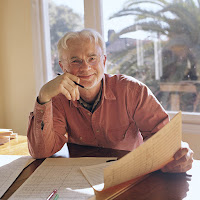 It's been a busy month. I've had little time to write. It's been more than two weeks now since I attended the February 24th performance at Davies Symphony Hall. Michael Tilson Thomas conducted Scheherazade.2 by John Adams and selections from Romeo and Juliet, by Prokofiev. The former, written for Leila Josefowicz (the soloist during the February performances) is not quite a violin concerto. I think Adams described it as a "dramatic symphony." Adams appeared on stage before the music began to discuss the piece, summarizing what was in the program notes. Adams conceived of the violin part as expressing Scheherazade, but Scheherezade as a strong, modern woman, and I can think of no violinist active today better to play it than Josefowicz, who is muscular in her playing but beautifully nuanced at the same time. I've seen her play three times now. I've been impressed each time. Scheherazade.2 is a complex piece, hard to take in on a single hearing, but I enjoyed it and enjoyed seeing Josefowicz wrestle with it. The performance brought the entire hall to its feet. Conductor Thomas and Josefowicz were eager to acknowledge Adams afterward, pointing to him in the balcony seats and insisting that he stand and be recognized. 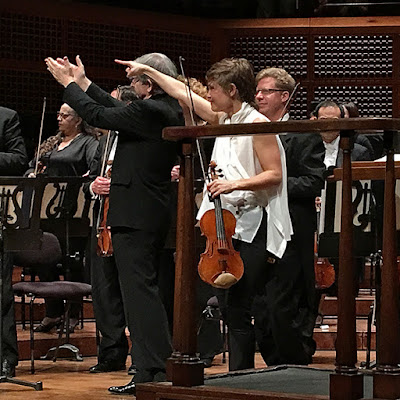 The Prokofiev was familiar music from the ballet Romeo and Juliet, but it's a piece I'd never heard live before, and its always fun to hear a familiar piece live for the first time. It makes you acutely aware of who in the orchestra is doing what when. I was pleased my favorite part of the ballet, the section knows as "Dance of the Knights" was one of the selections—but, of course, it would be.

On the evening of March 10, I was back at Davies Symphony Hall for a concert featuring another fine violinist, this time Arabella Steinbacher. Marek Janowski was the guest conductor. The program included Beethoven's Coriolan Overture and the Brahms Symphony No. 4. Steinbacher was soloist in a performance of the Hindemith Violin Concerto, an unfamiliar piece that she handled with aplomb. 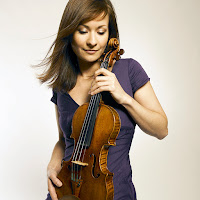 Steinbacher never lacks the ability to play lyrically when that is called for, but she excels at precise, staccato, modern music like the Hindemith, and her violin, which is rather gritty in the low register, suited the music. Janowski and the Symphony gave us a fine performance of the Brahms as well, receiving an extended standing ovation at its conclusion, with the symphony players at one point refusing to stand so that Janowski could be recognized alone. He looks a trifle frail, but he gets the job done. On the occasions I've seen him work, I've always had the impression that he's particularly good at communicating with the San Francisco performers and that they respond to him deeply, in a way that they don't with some other conductors.

Photographs of John Adams and Arabella Steinbacher courtesy of The San Francisco Symphony. Photo of Steinbacher by Jiri Hronik. Photograph of pointing Josefowicz by the author.
Posted by Colin Talcroft at 2:59 PM No comments: 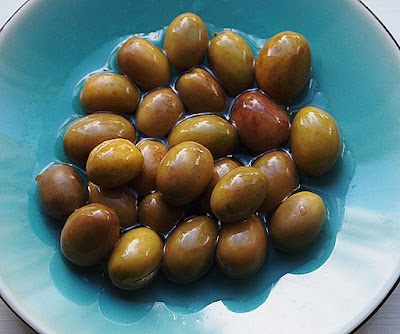 I've been making black olives at home for the past few years now, making batches whenever able to get my hands on good olives. I'd never tried green olives before, but this year I had access to a tree that still had green fruit in January, so I thought I'd give it a go. They are now done. The process was much the same as for black olives, but I started with a plain water soak for about ten days, changing the water every day, before switching to brine with a change every three or four days. I finished them with just a little bay, lemon juice, and white wine vinegar added toward the end, mostly the vinegar. I've always brined the black olives from the start and finished them with garlic, lemon, and rosemary. Both methods have resulted in some pretty tasty olives. Green olives seem to finish more quickly than black olives, suggesting the ripe fruit has more of the bitter compounds that make unprocessed olives inedible.
Posted by Colin Talcroft at 4:20 PM No comments:

We had more rain overnight on March 4-5. I found 0.90 inches of rain in the rain gauge this morning. That brings our total to 48.10 inches so far in the 2016-2017 rain year at my location in Northeast Santa Rosa and ranks this year as the fifth rainiest year since recording began in the 1880s—and we still have a few months to go....  We are now about 20 inches above normal.

[Update: A little more rain following this has left the total as of the morning of March 8 at 48.25 inches.]
Posted by Colin Talcroft at 10:57 AM No comments: