Books I'm Reading: A History of the World in 12 Maps 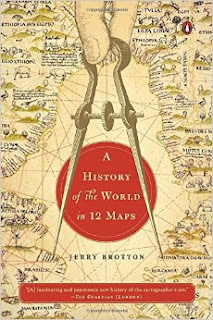 When we think about the meaning of maps--if we stop to think about their meaning at all--I suspect we work on a number of assumptions that author Jerry Brotton neatly disposes of in the course of his look at 12 extraordinary maps in A History of the World in 12 Maps (Penguin, 2012). Most important among these is probably the assumption that a map is an objective representation of the physical world. Brotton shows that maps—all maps—reflect the attitudes of the people who make them and the people for whom they are made. Maps are inevitably selective and biased, even when expressly intended to be quite the opposite, and therefore maps are always incomplete and expressive of only one view of the space they describe.

Brotton starts with a mention in his introduction of the oldest known map of the world, a map on a clay tablet excavated near modern-day Baghdad in the 1880s dated to c. 700BC - c. 500BC. However, the first of the 12 maps mentioned in the title of the book is the picture of the world created around 150AD by Ptolemy in his Geography, which, apparently, included no maps at all, but rather instructions on how to create a world map, the first known attempt to create a world map based on scientific principles and with an understanding of the mathematics of projection. It is remarkable for being an attempt to transmit knowledge digitally rather than pictorially--that is, with the numbers required to draw a map rather than by reproducing the map itself (although it is not entirely clear that the text was unaccompanied by maps published separately; in any case, none have survived). Ptolemy's known world was centered on the Mediterranean. What lay beyond the westernmost point in Europe, beyond modern-day Portugal, was unknown. The New World was yet to be discovered. Africa was not yet understood to be a continent surrounded by water. What lay beyond India was only vaguely understood and suggested.

He moves on to an 1154 map of the world made in Sicily by one Abu Abdallah Muhammad ibn Muhammad ibn Abdullah ibn Idris al-Sharif al Idrisi (mercifully shortened to Al-Idrisi), part of what Brotton describes as a "comprehensive summary of the known world" that included more than 70 regional maps and the world map discussed. Brotton further describes Al-Idrisi's work as an attempt to bring together "Greek, Christian, and Islamic traditions of science, geography, and travel to produce a hybrid perspective on the world based on the exchange of cultural ideas and beliefs between different faiths." Al-Idrisi's approach was inclusive and syncretic and an attempt to describe the world as it really is, even if that goal is elusive and the possibility of achieving it illusory. 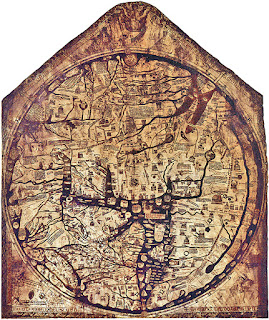 There follows a discussion of why maps are oriented the way they are. Most early Muslim maps, including Al-Idrisi's, were oriented with south at the top rather than north, mainly because the direction of Mecca in the earliest days of Islam was south for most of the religion's followers. Early Chinese maps were oriented with north at the top because the emperor was thought to look down upon his subjects facing south, with his back to the north, and all others looking up to him. Until the 15th century, Christian maps, however, were oriented with east at the top, as in the c. 1300 Hereford mappamundi, the third of Brotton's twelve maps (shown, illustration from Wikipedia). Here, the scientific approach is mostly discarded (the bulk of the factual information on the map derived from classical sources) and replaced by a religious point of view, in what seems a step backward from objectivity—but, again, one of Brotton's central themes is that maps really cannot be objective. The Hereford map shows the world as a sphere surrounded by water with the land divided into three areas labeled "Europa," "Asia," and "Affrica," although, as Brotton notes, Europe and Africa are transposed (it's not clear why). At the apex of the map (east) sits Christ, flanked by angels leading people to either heaven or hell, a depiction of resurrection and judgment. At the bottom of the map, opposite Christ and associated with the setting sun, decline, and death, lies the west. The shapes of the land masses are wildly distorted by ignorance of actual geography but also by the attempt to locate places mentioned in the Bible and to account for various Biblical stories. Around the borders Biblical, classical, and other mythical monsters are depicted. The Hereford mappamundi is more a map of the road to salvation in a Christian universe than a picture of the surface of the Earth. 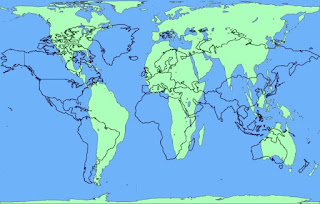 Each of the nine maps that follows is used similarly as a starting point for discussing how a picture of the world, a map, is a reflection of the people that make it, their attitudes toward the world, and, most importantly, their political, financial, and ideological interests. There is not room here to discus them all in detail, but Brotton looks at a 15th century world map centered on the Korean peninsula, very much concerned with relations with imperial China; Martin Waldseemüller's 1507 world map, created at a time when Europe was beginning to explore the rest of the world; a 1529 map by Diego Ribeiro, reflecting rivals Spain and Portugal aggressively claiming territory around the globe; Mercator's famous map of 1529, a view of the world that is highly influential to this day (although losing ground); Joan Blaeu's 1662 atlas, which becomes a centerpiece for a discussion of the economics of an intensely competitive market for maps in Holland in the 17th century; the Cassini map of France of 1793 as an example of maps as a tool for gaining and keeping political power (and a lesson in the futility of trying to remain up to date); Halford Mackinder's 1904 The Geographical Pivot of History in a chapter that deals with the rise of geography as a modern, scientific pursuit but also, again, a pursuit intimately connected with politics (in this case British colonial politics); the 1973 Peters projection map, a flawed yet highly influential attempt to rectify the distortions of the ubiquitous Mercator projection (perceived as oppressive and Eurocentric)*; and finally, Google Earth, which, although it might seem to be the closest thing we have to an objective depiction of the entire world, Brotton argues is inevitably biased and incomplete—like all maps.

*Shown is an overlay of the Mercator and Peters (or Gall-Peters) projections, the Mercator in black outline, the Gall-Peters projection in solid aqua. I have been unable to find the original source of this comparison graphic. If anyone reading this knows, please share, as I'd like to properly credit its creator.

[Here's a link to a brief Mental Floss article about a new Japanese world map that attempts to overcome the usual projection problems in a novel way. http://www.mentalfloss.com/article/88138/more-accurate-world-map-wins-prestigious-japanese-design-award. I see that this resembles the Dymaxion map or Fuller map, created by Buckminster Fuller. The Japanese one, however, is a single, uninterrupted sheet, whereas Fuller's map is highly interrupted.]
SaveSave
Posted by Colin Talcroft at 3:52 PM No comments: 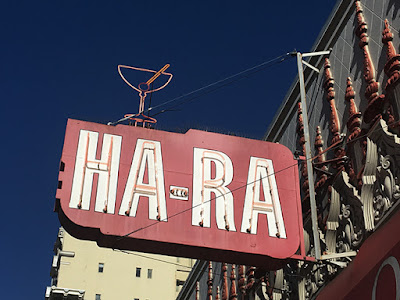 Another neon cocktail glass sign to add to my growing collection. (This is No. 21. For more, use the "The Cocktail Glass Collection" tab to the right.) This is the Ha-Ra Club, at 875 Geary St., in San Francisco. This one looks generic, just popped on top of the Ha-Ra sign.

[Update: In November 2017, I happened to drive by the place at night. Below is a shot of the sign lit.] 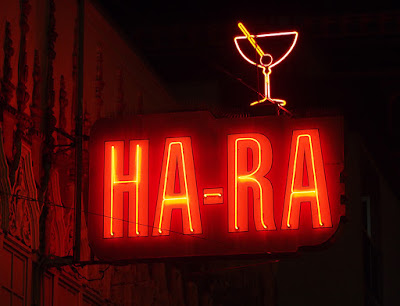 For more, click the "Cocktail Glass Collection" label at right at the top of the page.
SaveSave
Posted by Colin Talcroft at 2:59 PM No comments: