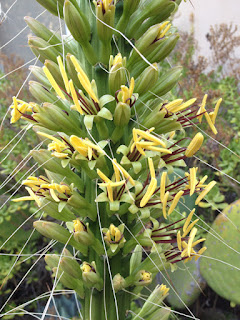 Agave filifera probably has a common name, but I don't know what it is. "Filifera," I've always assumed, refers to the filament-like fringes that form on the leaves (I see now that they're present on the flower stalk as well). They peel away from the margins of the leaves and curl up into little curlicues. It's one of the first plants I planted in the garden of my house, which was new when we bought it in 2000. The plant probably went in the ground in 2001 or 2002, at the latest. About a month ago, a flower stalk began to develop. It's been elongating since then. A couple of days ago the first flowers opened at the base of what has become an immense inflorescence. The flower stalk reaches to the eaves of the house--about 12 feet, I estimate. It represents ten years of stored energy. The photo here shows only the lowest 10 inches or so of the huge stalk. The flowers will open from the bottom up.

The plant itself is not especially big. It stands less than two feet tall. This gigantic organ of reproduction is therefore about six times the size of the plant that generated it. It's like a tulip blossom standing five feet tall, or, in human terms, the equivalent of a man with a 36-foot-long erection. It's no wonder the plant dies after it blooms.
Posted by Colin Talcroft at 9:40 AM No comments: