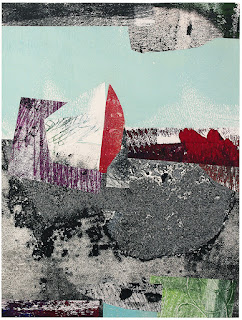 This one draws on some blue papers I've recently made and on black and white monoprints with some unusual textures caused by the paper ripping and sticking to the painted glass I work from. I left ripped sections on the glass and repainted the surface before making new prints. Because the sections covered with plastered down paper layers absorb ink, I ended up with areas of mottled grey-black unlike the cleaner areas of color created by printing off clean glass.

Click on the image for a larger view. For more of my collage work, visit my collage site at http://ctalcroft.wix.com/collage-site.
Posted by Colin Talcroft at 11:33 AM No comments:

Books I'm reading: Capturing the Light and The Edge of Vision

I've just finished Capturing the Light: The Birth of Photography, a True Story of Genius and Rivalry, by Roger Watson and Helen Rappaport (St. Martin's Press, 2013). Refreshingly well written, this was a quick read because reading it was a pleasure. Authors Watson and Rappaport give an overview of the history of the invention of photography by focusing on the main characters in the story, Henry Fox Talbot and Louis Daguerre, as well as on a number of other characters less well known. Nicephore Niepce, the inventor of the first non-ephemeral (if largely impractical) photographic process was familiar (I stumbled across his gravesite in a churchyard in France years ago), but others such as Frederick Scott Archer (inventor of the wet collodion process) were less familiar. The book gives a good overview of how Daguerre in France and Talbot in England arrived at two very different processes that allowed images to be captured permanently. 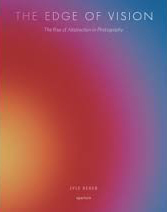 Lyle Rexer's The Edge of Vision: The Rise of Abstraction in Photography (Aperture, 2013, paperback edition) looks at the history of abstraction in photography, beginning with some of the photograms of Henry Fox Talbot and ending with contemporary works that stretch the definition of photography beyond the breaking point. In between, there is much of interest to see and the book seems more valuable for the many illustrations it includes than for the text, although there is some interesting back material included in an appendix, mostly writing about photography by critics and some of the artists whose works are included in the book. This is a good reference that suggests what photography is capable of when released from its traditional role as an objective recorder of the world around us (although many would argue that photography never has been that at all).
Posted by Colin Talcroft at 9:58 AM No comments: