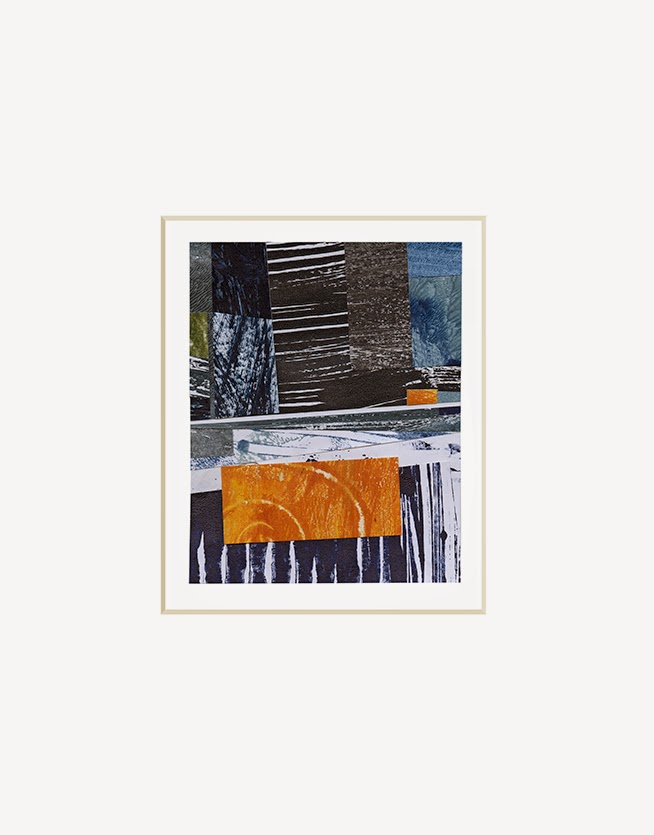 Once in a while I come across an unused assemblage of shapes and colors that somehow works in juxtaposition with another leftover fragment. This little collage is a pairing of two such fragments from months back. As a result, this new piece has an affinity with work I was doing a while ago. Echoes from the past.

Click on the image for a larger view. For more, use the Art I'm Making tab to the right or visit my collage website at http://ctalcroft.wix.com/collage-site/ (requires Flash Player).
Posted by Colin Talcroft at 4:14 PM No comments:

100 years after his activities in the desert during WWI, people are still writing about T.E. Lawrence. He remains a fascinating figure. Most of that writing is biographical. Steven C. Catton's book Lawrence of Arabia: A Film's Anthropology (1999, University of California Press), however, is about the 1962 film directed by David Lean--its conception, its reception, its meaning.

The better you know the film, the more interesting his book will be. I can imagine some of the detailed analysis of individual scenes being hard to follow if they aren't already fairly firmly embedded in memory. Given the time, the best strategy would be to watch the movie, read the book, and then watch the movie again. I suspect even people who know the movie very well will find something new to see in Lawrence of Arabia after reading Caton's analysis from the point of view of an anthropologist, examining the implications of the film's assumptions about other cultures, about colonialism, about class and gender. Caton succeeds in suggesting the film is rather more complex and ambivalent than it may at first seem. He also stresses how important it is to see Lawrence of Arabia as originally edited, arguing that seemingly insignificant details often cut to make a very long film more manageable are essential to understanding what the script writers and Lean intended. Worth a read if you're a fan of the film and want to add another dimension to your appreciation of it.
Posted by Colin Talcroft at 12:19 PM No comments: