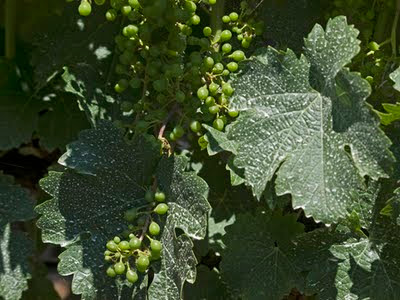 After our bizarre end-of-June storm (0.8 inches of rain) it was necessary to go out this morning again to spray the grape vines with sulfur. A layer of sulfur prevents mildew from forming on the plants or the grapes. Bad mildew can make the grapes useless. The vineyard is so small (34 vines) that any loss of fruit is significant, so I do my best to prevent it. Let us hope that we have no more rain now until after harvest, probably in early October. As is evident from the photo, the grapes are well on their way to forming clusters.
Posted by Colin Talcroft at 5:41 PM No comments:

Unless you live in northern California, you won't understand why the title of the this brief post is startling. Any rain in June is unusual here. To have a full-blown downpour is startling indeed. With only two more days to go in the 2010-2011 rainy season (our rainy seasons officially start on July 1 and end on June 30 of the following year; the 2011-2012 season will start in a couple of days), we've had nearly an inch of rain (0.8 inches), bringing the 2010-2011 total at my house to 41.05 inches, well above the historic average annual rainfall in Santa Rosa, which is just under 32 inches. Only a couple days ago I sprayed our grapes with sulfur (to prevent mildew) for what I had hoped would be the last time this season, but I'll have to do it all over again, as soon as things dry out again....
Posted by Colin Talcroft at 4:54 PM No comments: 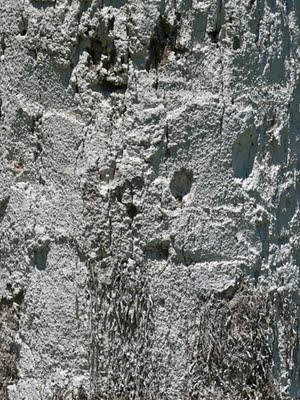 On a recent trip to Calistoga and some of the other small towns in the area, I took a walk around the grounds of the Indian Springs resort. Big palm trees are planted all around the property. The bases have all been painted white. I liked the texture, the shadows. Found Art.

I just finished reading God is not Great: How Religion Poisons Everything, by Christopher Hitchens (originally published by Twelve: Hatchette Publishing Group, 2007, but I read the paperback edition of 2009). This is a book that until recently had escaped my notice. I picked it up, remaindered, a while back, not really knowing anything about it, simply because the title was provocative. I realize now that it must have got a lot of press when it was new and it seems to have stirred up quite a bit of controversy--although I don't really see why. So much of what author Hitchens says about religion here seems self-evident to me, needing little elaboration, but I acknowledge that many people do believe strongly in the stories that religions tell and that there does seem to be a powerful innate human tendency to need some sort of belief system. Hitchens acknowledges the same, but doesn't allow that to keep him from pointing out the many ludicrous things religions ask their adherents to swallow. Perhaps the most interesting angle was an attempt the author makes to look at religion from a purely moral perspective. He asks whether, all in all, people have behaved better or worse because of religion, and he comes down firmly on the side of secular humanism, not religion.

Unabashedly atheist, Hitchens pulls no punches for anyone. He happily insults all religions equally, not even failing to skewer Buddhism, which has always seemed to me the most benign of the major religions (note, however, that the book focuses on the three main monotheistic religions). Well written, well argued, entertaining. Recommended. The problem is, this book will do nothing to convince the true believer--it will only annoy and anger the religious--while, to the confirmed atheist, it will likely seem a series of arguments that hardly need to be made. Perhaps this book will be of most use to the undecided fence-sitter that needs a kick in the pants to finally abandon all hope.

For more book reviews, use the "Books I'm Reading" tab at the upper right
Posted by Colin Talcroft at 5:50 PM No comments: 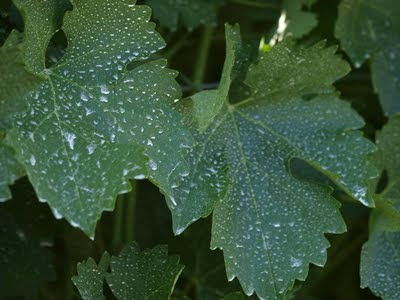 Today I finally judged it safe to spray the grapes with sulfur for what I hope will be the last time this season, although one more application may be prudent. I had been waiting for the vines to finish flowering and for the fruit to set before getting them wet. The Sangiovese looks excellent this year, with full clusters of tiny grapes already coming along, but the Cabernet vines don't seem to have set fruit very well despite my waiting. I had rather hoped for a good crop this year, as the weather was mostly dry and windy during flowering, but it's still early to judge things. Anyway, so far no signs of mildew on the vines. I topped the most vigorous vines as well, as they were beginning to shade the back row. Keeping my fingers crossed.
Posted by Colin Talcroft at 4:57 PM No comments: 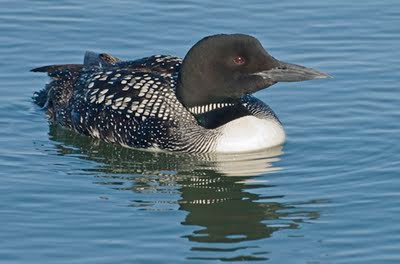 On two trips to Bodega Bay recently I've found a small group of Common Loons huddled in the late evening at the north end of Bodega Harbor. They seem to disperse during the day. Two of the birds were in full breeding plumage, which is fairly unusual for this location. Only a few Common Loons stay in the area over the summer, and they usually retain their non-breeding "winter" plumage when they do stay, for reasons I don't quite understand. So, it was a pleasure to see this one so handsomely attired. There were about six others, in the drab non-breeding plumage along with about a dozen Western Grebes and a single Greater Scaup. Further south in the harbor was a Horned Grebe, also in full breeding plumage, again something that's comparatively uncommon in Sonoma County.