Last night and yesterday (April 6-7, 2017) we had another 1.9 inches of rain. That raises our total for the 2016-2017 rain year to 52.25 inches at my location in northeastern Santa Rosa and makes this the third-wettest year on record since records have been kept in the county, since 1888, apparently. The official record for Santa Rosa (monitored at the Sonoma County Airport) is already at  55.51 inches, likewise the third-wettest year relative to the official total, and only about two-tenths of an inch behind second place; we're likely to move up a slot by the end of today. Another 1.5 inches in the coming weeks will be enough to put us into first place, topping 56.06 inches, set in 1889-1890.

[Update: More rain on the 8th. An additional 0.70 inches puts us at 52.95 inches moving us into second-place for wettest year on record, at my location: as noted above, the official tally for Santa Rosa already has us in first place this year.]
Posted by Colin Talcroft at 11:48 AM No comments:

Books I'm Reading: On Sunset Boulevard: The Life and Times of Billy Wilder 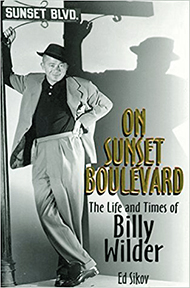 Midnight, Ninotchka, Ball of Fire, The Major and the Minor, Double Indemnity, The Lost Weekend, A Foreign Affair, Sunset Boulevard, Stalag 17, Sabrina, The Seven Year Itch, Witness for the Prosecution, Some Like it Hot, The Apartment, One, Two, Three, Irma La Douce—Wilder either wrote or co-wrote the screenplay or wrote the screenplay and directed each of these films (and more than a dozen more Hollywood films that are less well known today, not to mention the many screenplays he wrote before emigrating to the United States). It's an impressive list; each is a classic.

Before picking up Ed Sikov's On Sunset Boulevard: The Life and Times of Billy Wilder (Hyperion, 1998) I had seen all of these films but I realized quickly as I began reading the book that I knew very little about Wilder's early life—in particular, that he had written so many screenplays. I knew him mostly as the director of the films from the sweet spot of his career—say, from Double Indemnity to The Apartment.

He got his start, however, as a screenwriter, working first in German, following a period as a journalist in Vienna and then Berlin. He had been born near Krakow, in 1906. Twenty years later, he was leaving Vienna for England in the company of bandleader Paul Whiteman, on tour (he had become friendly with Whiteman by showing him around Vienna; as a reporter, Wilder knew the city well). A few months later he left with the Whiteman entourage for Berlin, never looking back. When it became clear in 1934 that Jews were no longer welcome in the German capital, he left for Hollywood, without his mother, who later vanished in the Holocaust. When he arrived in the United States, he had virtually no money and spoke almost no English, but he quickly found work as a screenwriter anyway, often working as a team with Charles Brackett. Leveraging his quick wit, chutzpah, and good luck he found increasingly lucrative work and eventually landed an opportunity to direct. The Major and the Minor (1942), starring Ginger Rogers and Ray Milland, was his first directing credit.

On Sunset Boulevard looks at Billy Wilder as an artist, a businessman, and, eventually, as an exceedingly wealthy art collector gradually left behind by a changing Hollywood. Author Sikov looks at each of Wilder's films in detail, from conception to critical and popular reception, while serving up a great deal of anecdote to create a vivid portrait of one of Hollywood's most important directors. Along the way, Sikov gives us much about the people Wilder worked with and for and the people who worked for him, particularly writing partner Brackett, and performers such as Marilyn Monroe, William Holden, and Jack Lemmon. Wilder was notoriously foul-mouthed and casually abusive and tightly controlling on the set—character traits that not everyone tolerated well. It was his desire for control that drove his ambition to move from writing to directing and that kept him writing much of the material he directed, material that was often on the edge of the limits allowed by the Hollywood production code, a code that Wilder was instrumental in eroding (Wilder's writing was often darker and more sexually suggestive than the censors would allow, particularly early in his career). Long but a worthwhile appreciation of the man and each of his major films and worth reading for the wealth of information it includes about how films are conceived, written, financed, and produced.
Posted by Colin Talcroft at 1:52 AM No comments: