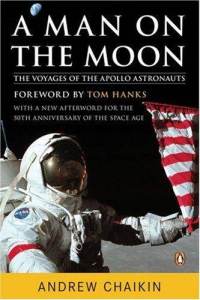 I'm old enough to remember much of the Apollo program. I recall school stopping for virtually every launch and splashdown leading up to and including the first moon walk, on April 20, 1969 (Apollo 11). We were herded into the auditorium for each event or made to sit in a circle around a TV brought into a classroom. I remember the broadcasts in black and white. I also remember the ebbing of public interest in the space program. By the time Apollo 17 went to the moon, most people had moved on--which is a shame; while the first landing on the moon was highly important technically and for political reasons, it wasn't until the later Apollo missions that the exploration of the moon really began.

Andrew Chaikin's excellent book A Man on The Moon: The Voyages of the Apollo Astronauts (Penguin, 1995) covers the period of transition from the Gemini missions to the Apollo program following Kennedy's public challenge (to land a man on the moon and return him safely home before the end of the 1960s) through the last moon landing, in 1972. Chaikin pays careful attention especially to the preparations for the scientific work of the later missions, mostly geological investigations. While I remember some of the most important events of the time, A Man on the Moon puts it all into perspective. Perhaps the most startling thing that emerges is the brevity of it all. Only a little more than eight years separate Kennedy's historic speech of May 25, 1961 and the first moon landing, and the six lunar landings spanned only three-and-a-half years. The last of them was already 40 years ago.

Well written and meticulously researched, the book is based on contemporary media reports, NASA mission archives, and extensive interviews with 23 of the 24 men who visited the moon, as well as interviews with many of their wives and some of their children, and with Apollo program managers, experiment scientists, engineers, flight controllers, flight directors, geologists, historians, NASA administrators, and even some of the men that designed and created the spacesuits worn on the moon missions. The result is a narrative that gives a palpable sense of having been there. Highly recommended.
Posted by Colin Talcroft at 6:16 PM No comments: 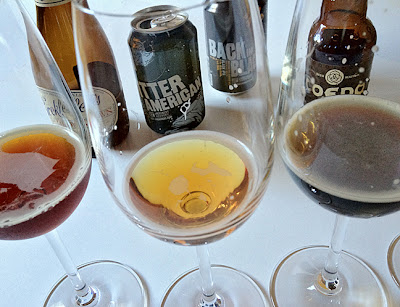 I recently wrote about the delicious "Kyara" beer from Coedo Brewery in Japan. I wish I could afford to drink it whenever beer seems appropriate (that is, on hot summer days like today), but it's rather pricey. I stopped in at Trader Joe's yesterday and I got to talking about beer with one of the guys working in the beverages department. I tried to describe Coedo's "Kyara" to him and he recommended a few beers he thought might be similar but less expensive. I bought three as a start. I tasted them together yesterday, along with a bottle of the Coedo "Kyara" as a point of reference. I tasted the "Breckle's Brown" from Anchor Steam in San Francisco, "Bitter American" from 21st Amendment Brewery, in Cold Springs, Minnesota, and "Back in Black," also from 21st Amendment Brewery. Brief tasting notes follow.

Anchor Steam "Breckle's Brown" (6% alcohol): Attractive copper color. Fairly strong hoppy scent with suggestions of wood and chrysanthemums. At first, seemed a typical, overly hoppy California beer, but it proved quite dry on the palate and the hoppy element wasn't overdone. Nice, lingering bitterness that was pronounced, but not excessive. After the Coedo "Kyara," I liked this beer best of the bunch. Recommended. Seems to strike a nice balance between hoppy and malty flavors, although it doesn't quite achieve the wonderful balancing act of the "Kyara," a beer that is rich and malty without being heavy or sweet and that has refreshing, vibrant carbonation.

21st Amendment Brewery "Bitter American" (4.4% alcohol): This came highly recommended at Trader Joe's. The woman at the checkout counter confirmed that it was very popular among the male staff members. I was less impressed--which is not to say that this is a bad beer. It's just not what I was looking for--a Coedo "Kyara" substitute. Golden Lager color. Floral scents. Sweet scents. Not very hoppy on the nose. Seems flat after the Anchor Steam beer--probably because it's considerably lower in alcohol and it has a finer, creamier head. Rather strong, hoppy aftertaste. Seems thin on the mid-palate and lacking in body. Having said that, not bad, just not "Kyara" and I preferred the "Breckle's Brown.

21st Amendment Brewery "Back in Black" (6.8% alcohol): Dark chestnut brown. Fairly unassuming nose. On the palate, suggests chocolate and coffee, particularly coffee, with a flat, creamy foam reminiscent of English dark beers--which is not a bad thing, but, again, not what I was looking for here. Slightly sweet on the finish. Less hoppy than the first two beers.

Coedo Brewery "Kyara" (5% alcohol):  What makes this beer so appealing to me is its subtle balance of body, flavor, and texture, with the crispness and refreshingly bright characteristics of a lager. Pretty amber color. Malty nose. Good body and with more presence than the alcohol content would suggest. Crisp, with moderately fine, bright foam that's substantial without being heavy or too creamy. Dry but not overly hoppy. Again, "Kyara" seems perfectly balanced to me. Delicious. Highly recommended. Just wish it weren't so expensive.

In conclusion, I liked the "Kyara" best, followed fairly closely by the Anchor Steam "Breckle's Brown,"a beer I'll probably buy again, then by "Back in Black" and finally the "Bitter American." Despite the enthusiasm at Trader Joe's, I probably won't go back for more of the 21st Amendment Brewery beers, although they were tasty enough. Obviously, personal preference has a great deal to do with the decisions we make about what to buy and what to drink. I was looking for a beer with presence, good malty flavors, and hops--but not excessively hoppy--that also has crisp, refreshing carbonation: Coedo's "Kyara" seems to get this combination just right. The Anchor Steam "Breckle's Brown"is close to this view of an ideal beer as well.

As an appendix of sorts, I also tried the 21st Amendment Brewery "Brew Free or Die IPA" (7%).  I must say, I rather liked it. No longer thinking about the Coedo "Kyara," I took it slowly and on its own terms. An attractive coppery gold with a creamy but persistent head. Hints of hops and molasses on the nose. Very flavorful. Has good body--reflective of its comparatively high alcohol content. Good hoppy taste, without being too hoppy and without the harsh bitter aftertaste of a more heavily hopped beer. Good, extended finish that was nicely balanced between hops and a very faint sweetness.
Posted by Colin Talcroft at 11:43 PM 1 comment: