The garden is full of flowers at the moment. For about four years I kept a detailed record of the first date of bloom of each flower species in the garden (2009 to 2012). Somehow I didn't have the energy to keep up this year. So, here I note simply that much is in bloom now. 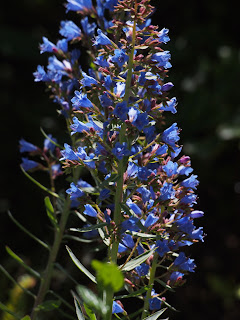 The Wisteria has just finished. The climbing roses are all in full bloom, with "Flutterby" having started first, the old-fashioned pink climber on the back fence--the laggard among them--just coming into bloom now. "Altissimo" and "Sally Holmes" are at peak. The bush roses "Cocktail" and "Easy Livin'" are in full bloom. Most of the Ceanothus varieties are finishing. The neglected German iris (they need to be lifted, replanted, and fertilized--I can never remember what time of year to do that, and so they languish) are blooming sporadically but could do much better.

Candytuft is fading, but the Rhododenron called "Noyo Dream" is coming into bloom and the large white Rhododendron with a name like "King George" has bloomed convincingly this year for the first time. Rhododendrons are also blooming at the front of the house, under the bamboo. Echium gentianoides is in full flower (pictured). Salvia Chamaedryoides, a similar shade of blue, is just beginning to open, and a patch of garden sage I'd forgotten about behind the house is blooming as well. Most of the rock roses are in flower. Phlomis fruiticosa (Jerusalem Sage) is blooming, and the other Phlomis species are either just coming into bloom or will be covered with flowers soon. The Rosa chinensis mutabilis on the side of the house (a large, blousy, multi-colored, single-petaled rose) is beautiful this year. I wish I could remember the name of this little mallow-like flower (below) that has spread itself all around the shady parts of the garden.

Before long, the dry summer will rob us of much of the color, but it's all very pretty right now. 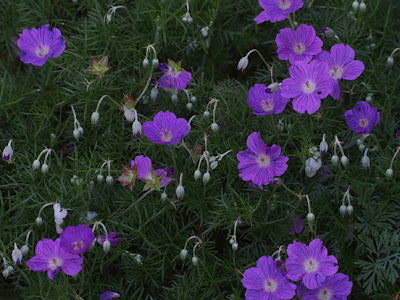 Posted by Colin Talcroft at 9:41 AM No comments: 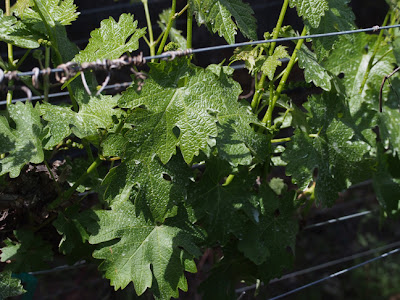 Over the weekend (April 27) I thinned the shoots on the grape vines. The longest shoots are already about 18 inches long. I left two shoots to each node except on the strongest vines, where I have always left twice that many with no apparent ill consequences. On the one or two weaker vines, I leave one in the hopes that that will encourage a strong cane as a foundation for next year's growth. The vines generally look healthy and strong, though. I did the first sulfur spraying as well. So far everything looks good. This year, 2013, will be our tenth vintage.
Posted by Colin Talcroft at 9:14 AM No comments: