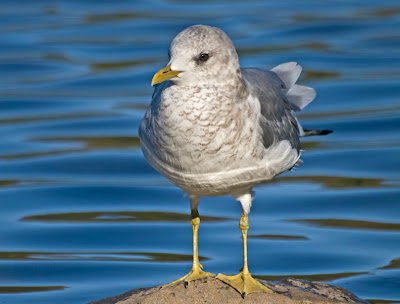 I took a walk around Lake Ralphine this morning--around the lake at the water's edge and then along the ridge trail that connects the lake with Spring Lake. There were a couple of unusual birds. I saw my first Varied Thrush in about four years. There was a nice Fox Sparrow on one of the trails. There was a Horned Grebe on the water, which is very unusual at this location--the Horned Grebes usually stay out at the coast. Among the gulls (mostly Ring-billed Gulls and California Gulls) there were four Mew Gulls, which don't usually show up at Lake Ralphine. One is pictured above. 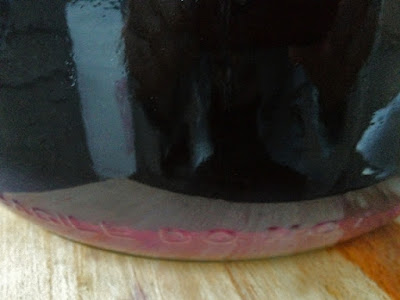 Today I racked and sulfited (to 55ppm) our 2011 Cabernet Sauvignon/Cabernet Franc. The wine was undergoing malolactic fermentation, which may or may not have gone to completion after three weeks. The only way to know for sure would be to do a paper chromatography test, which I may get around to eventually. I decided to go ahead and rack the wine despite the uncertainty because it was beginning to get a hydrogen sulfide smell, and all the books recommend getting the wine off the lees sooner rather than later if that happens (separation from the lees and aeration usually solves the problem). So, to be safe, I did. In the photo above, you can see the pink layer of dead yeast and other solid matter that had settled to the bottom of the container. Now the wine is mostly free of sediment. Tomorrow I will add oak staves, and then all that remains to be done is to wait for a couple of months until it's time to rack the wine off any new sediment that forms. Tasting the wine today, it seemed a little low in acidity, which may need some adjusting.

[Update: On December 2 I treated the wine with 5ml of 1 copper sulfate solution, as advised by the people at The Beverage People, our local winemaking supply store. Copper sulfate reacts with the sulfur compounds that create the smell I was noticing to produce copper sulfide, which is insoluble in wine. It drops to the bottom of the container where it can be left behind by another racking, which I'll take care of in the next day or two. After that, I will add yeast hulls, which absorb any residual copper--although there should be very little and the initial dose was just under the legal limit--not that that matters; I don't sell my wine, but I'm assuming the legal limit is based on safety factors. After about two weeks with the yeast hulls in, I'll rack again. The copper treatment works wonders. In about five minutes, the hydrogen sulfide smell was entirely gone.]
Posted by Colin Talcroft at 5:56 PM No comments: 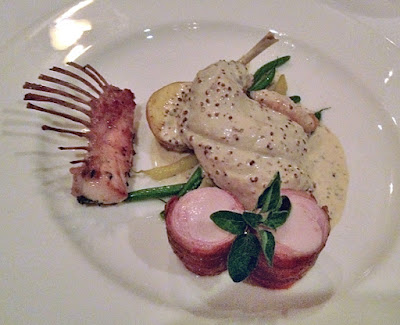 My son went to a friend's house today and ended up getting invited to stay the night. It seemed like a sudden opportunity for a rare night out for good food and wine with my wife. I called Terrapin Creek Café, in Bodega Bay, a restaurant I've enjoyed several times in the past, but no reservations were available--probably the result of its recent gaining of a Michelin star. I decided to try the Farmhouse Inn, another Michelin-starred restaurant in the area (technically, in Forestville), and was offered a table that someone had just cancelled. I've been to the Farmhouse Inn only once before--about eight years ago--and it was wonderful. I had high expectations. I decided to take along an old bottle of Burgundy from my cellar, a 1986 Vosne Romanée 1er Cru "Les Suchots" from Moillard.

I have to say I was disappointed. The meal generally was good. The service was good. But the food really should have been great--it should have been the sort of meal that keeps you saying "Wow!" to yourself as you eat. Isn't that what Michelin stars (and the prices that go with them) are all about? As it turned out, fairly ordinary appetizers and main courses--neither served quite as warm as I would have liked--were book-ended by what turned out to be the highlights of the meal--the amuse-gueule and the desserts. The former was a tiny cup of frothed "soup" made from jerusalem artichokes that had a wonderful earthiness enhanced by smoky bacon flavors. It was served with mushroom paste-garnished crostini. The desserts were wonderful, particularly a pumpkin cheesecake that somehow managed to taste like cheesecake and a good pumpkin pie at the same time. The coffee was excellent. 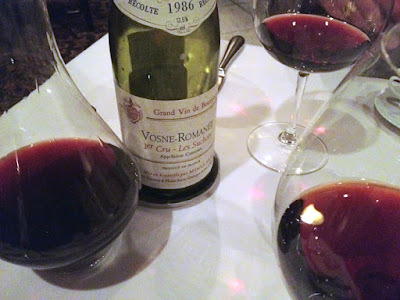 The wine, although 25 years old, was fresh and delicious--classic Burgundy. Wonderfully fragrant, it suggested violets, cumin, and celery seed, and it was nicely balanced on the palate between fruity sweetness and smooth, mature tannins. I will say that the wine server did an admirable job decanting the wine, which must have been challenging because the drive to the restaurant stirred up a deposit in the bottom of the bottle that had formed over decades. I bought the wine in Tokyo, probably around 1990.

We had the Grilled Mediterranean Octopus and House-smoked Duck Breast Salad for appetizers, the Roasted Breast of Guinea Hen and Rabbit Rabbit Rabbit for main dishes. The Octopus was tender and nicely seasoned, and I enjoyed the accents provided by tiny chunks of chorizo and the olive tapenade spread under the meat, but the duck salad was very disappointing. The duck slices were tiny and not very flavorful. The salad was mostly a pile of the same sort of greens I can pick any day from my own garden (frisée, arugula, and mizuna). The greens were fresh and in no way bad--but as a whole, the salad struck me as uninspired and uninspiring and somewhat skimpy (and I stress that I'm not a big eater).

The rabbit is called Rabbit Rabbit Rabbit because it's a trio of rabbit dishes in one--rabbit loin wrapped in bacon; a roasted, Frenched rib rack (looking like a miniature rack of lamb); and rabbit leg confit in a mustard sauce. The loin seemed the most successful of the three--the meat was tender and infused with bacon flavors--but the tiny ribs, although fun, were not very flavorful. The leg confit was mostly interesting for the whole-grain mustard sauce that was on it. The meat, however, seemed lacking in character. It had a washed-out flavor that reminded me of the disappointment of oysters shucked and washed so carefully that all the scent and flavor of the ocean is gone from them. The meat tasted somehow sanitized (although I don't mean to suggest anything unwholesome). The food was simply not as good as it seems it should have been given the prices and the reputation of The Farmhouse Inn. Game should be gamey. This was not. I felt much the same way about the guinea hen. Good enough, but not exciting.

Finally, I have to say that $35 for corkage is well over the line between reasonable and excessive.
Posted by Colin Talcroft at 12:06 AM No comments: