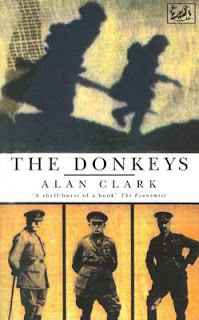 I've been reading a lot of military history lately, a consequence of my father's death in February and the stacks of his books now sitting in my house as a result. My brother and I have been going through them, keeping those that look interesting, disposing of others, but it's been much easier to do the keeping than the disposing. My father left behind an awful lot of good reading material. There is a substantial military history section (ranging from ancient times to WWII, but heavy on Napoleon, the Crimean War, WWI and WWII). Although I'm still in the middle of reading Churchill's six-volume history of WWII, I found myself flipping through this short book about WWI not long ago and I ended up reading it in one sitting.

I was ignorant of the fact that Clark's The Donkeys is a rather well known and controversial book. Originally published in 1961, by Hutchinson, I read the 1991 Pimlico paperback edition. Clark, son of the well known art critic Sir Kenneth Clark, looks at only one year of the war--1915--surveying the main battles of that year and coming to the conclusion that obstinate pride and a failure to admit and learn from failure among the leading WWI generals  resulted in the needless slaughter of tens of thousands of men--essentially the destruction of Britain's professional army which then had to be replaced by largely untrained recruits. This is a familiar story, but it's probably worth at least a little scrutiny. What got me thinking was not so much the book (which appears to have been influential in supporting the persistence of the idea of lions led by donkeys) but criticism of the book I read subsequently--criticism that accuses Clark of a rather lopsided view of things and some embellishment.

The title, for example, is drawn from a conversation reported in the memoirs of one Erich von Falkenhayn, purportedly between German generals Erich Ludendorf and Max Hoffman. Ludendorf is reported to have said "The English soldiers fight like lions." To which Hoffman is supposed to have replied "True. But don't we know they are lions led by donkeys?" Clark uses these lines also as an epigraph at the start of the book. Falkenhayn was chief of Germany's General Staff during WWI (from September 14, 1914--coincidentally, exactly 98 years ago today) having been Prussian Minister of War from 1913. He later became a writer. Apparently, however, the provenance of the quote and even the existence of the memoirs are in doubt, and it has been suggested that Clark made up the exchange. The lines neatly summarize a core idea of the book, but a little Internet research suggests this meme--lions led by donkeys--was widely applied during WWI in reference to the leaders and men on both sides of the conflict and it may have been current as far back as the Crimean War (Wikipedia even has a page headed "Lions led by donkeys," which gives details).

Whether Clark was exercising poetic license or not, his book clearly supports the notion that the generals were highly blameworthy, that the fighting men accepted assignments that meant almost certain death with remarkable fortitude, and that they endured hellish conditions. Recent scholarship seems to take the view that serious leadership mistakes were, in fact, made but that condemnation of the wartime leaders has probably been lacking in nuance.Whatever the case, the horrifying statistics don't really need the support of Clark's prose. They're horrible enough baldly presented.

Clark relates that he got the idea for the book when unrelated research caused him to stumble upon a diary by one Captain F. Hitchcock of the Leinster Regiment that describes trench conditions near Ypres in 1915 (an extract is among the appendices). That genesis is probably responsible for the book's very narrow focus. It's an interesting slice of history, but I must admit that my overall grasp of the events of WWI is a bit sketchy. This is probably a book to approach after a refresher. Perhaps it's time to read Barbara Tuchman's The Guns of August again--although that's probably been superseded as the go-to book for an overview of the causes and campaigns of WWI. Maybe not.
Posted by Colin Talcroft at 12:24 PM No comments:

I belatedly note that I attended the September 6 performance of the San Francisco Symphony at Davies Symphony Hall. Guest conductor Semyon Bychkov led the Symphony in a performance of Wagner's Overture to Tannhäuser followed by Bruch's Violin Concerto No. 1, with Pinchas Zuckerman on the violin. After intermission, we heard Tchaikovsky's Symphony No. 5.  As usual, the Wagner left me cold. I don't have anything to say about it except that it seemed competently played. I'm no judge of Wagner. 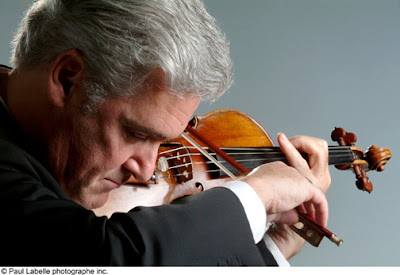 I was mostly looking forward to hearing the Bruch. Zuckerman tossed it off with apparent ease despite being in pain. I learned after the performance that he had hurt his back recently and was not feeling in top form. With the exception of a little roughness at the outset, it didn't show much. I liked the sound of Zuckerman's violin (from what I can gather, a 1742 Guarnerius)--throaty in the low register. He had been scheduled to sign autographs but bowed out--a disappointment as I had brought with me my autographed copy of Kyung-wha Chung's debut vinyl disc and had hoped to get him to add his signature to it; Chung and Zuckerman were co-winners of the Leaventritt Competition in 1967, and both studied at Julliard under Ivan Galamian.

The highlight of the evening, however, turned out to be the Tchaikovsky. Bychkov gave it a slightly idiosyncratic reading with some unusual emphases here and there, but it worked. I thought his use of rubato masterly. The whole gave a simultaneous impression of precision and flow. Very persuasive. As usual, the orchestra was in excellent form, with the horns and woodwinds standing out in the Tchaikovsky. Had a quick bite and a glass of wine at Absinthe afterwards. The friendly staff said it was nice to have the concertgoers back with the start of the 2012-2013 season, likening us to migratory birds.

Photo of Semyon Bychkov by Thomas Brill. Photo of Pinchas Zuckerman by Paul Labelle. Photos courtesy of the San Francisco Symphony.
Posted by Colin Talcroft at 10:31 AM No comments: 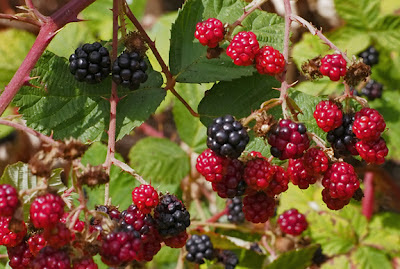 Went blackberry picking today at Place to Play Park, in Santa Rosa. I had been there a couple of days ago looking for birds and noticed many unpicked berries along one side of the park. Went back today with a ladder and plenty of containers. Now, what to make of them? 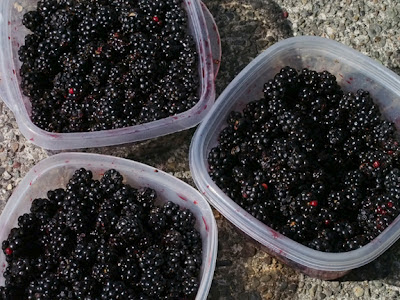 Posted by Colin Talcroft at 11:53 AM No comments: 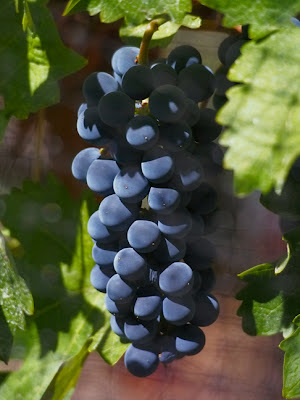 It's been about 10 days since I last reported on the grapes. I'm pleased to be able to say that there have been no losses so far. The nets have held. The electric fence is pulsing away. I'm hoping that the critters don't even know the grapes are there. It's still early, but I've been sampling a random grape here and there. The Cabernet seems to be already at about 19 brix, the Sangiovese at about 20 brix--both higher than I would have thought. I usually aim to harvest at around 24 brix. The rule of thumb is that one degree of brix takes about a week to develop, which would suggest we'll be harvesting a month from now, at about this time in October, but, we'll see. Ongoing vigilance is in order.
Posted by Colin Talcroft at 10:51 PM No comments: