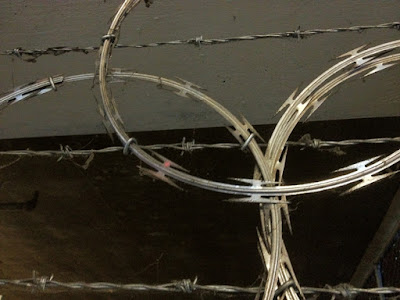 Razor wire and barbed wire, tools of exclusion or incarceration, would seem remote from art, but I liked the rhythms formed here by the overlapping coils of razor wire and by the barbed wire and wall behind them. Art is where you find it.

For more found art, see my blog Serendipitous Art.
Posted by Colin Talcroft at 8:51 AM 4 comments: 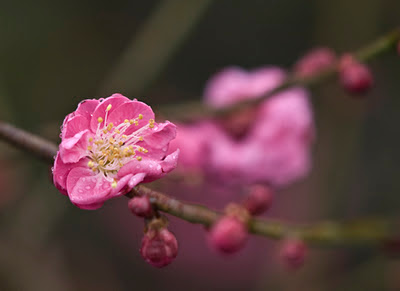 I belatedly report that our pink Japanese plum has started blooming. The first bloom appears to have opened on about January 22, although I didn't notice the flowers until a day or two after that. The tree bloomed on January 19 in 2011, yielding a year of 368 days. I don't seem to have earlier records for this flower, probably because the tree is still small.
Posted by Colin Talcroft at 10:59 AM No comments: 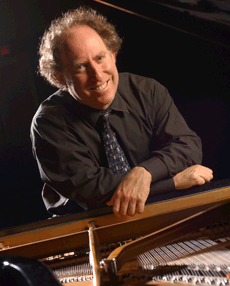 What a pleasure to see and hear Jeffrey Kahane with the Santa Rosa Symphony again. Kahane is making guest appearances in a series of three concerts playing Mozart's Piano Concerto No. 25 and Rachmaninoff's Symphony No. 3, conducting both pieces as well. I attended yesterday's performance (Sunday, January 22).

Kahane gave a delightfully lively and crisp performance of the Mozart, I thought, adding to the fun by playing an expansive cadenza of his own composition. I thought the symphony players were in fine form, with the woodwinds a standout, particularly the flute and the bassoons. The audience was very appreciative. Some in the crowd waved enthusiastically to Kahane after the performance, as if to say "We've missed you."

The choice of a large 20th century symphony for the second half of the program following the Mozart concerto was not an obviously logical one, but I trust Kahane had his reasons. I just wish I could ask him what they were. I can't really say much about the piece as I'd never heard it before, and it's not music that immediately grabs you. It gave the impression of being rather too full of ideas not fully developed or linked, but I suspect that apparent fault is as much a reflection of my ignorance as it is of anything else. Having said that, it seemed to veer from the pastoral to the grandiose and back again, sounding here like something quite modern, there like something more traditional, and in one or two places rather like generic film score music. Nevertheless, there were some interesting textures and some unusual percussion effects, and the musicians showed the same concentration they exhibited playing the Mozart. Kahane seems always to get the best from the Santa Rosa players (although there were a lot of unfamiliar faces among the musicians this time). Again the reception was warm. Kahane and the orchestra received a second standing ovation. As the audience began to leave, the conductor hopped onto the podium and began an encore.

As if to provide an antidote to the unfamiliar Rachmaninoff piece, Kahane and the Santa Rosa Symphony began to play the overture to Die Fledermaus, by Johann Strauss II, a piece the audience was better able to warm up to. It was well played and enthusiastically played and the crowd left quite pleased. The concert was worth it just for the Mozart, but the Strauss was a fun and unexpected way to end the afternoon. I hope we see Mr. Kahane often in the new Green Music Center. We do miss him.

Photo of Jeffrey Kahane courtesy of the Santa Rosa Symphony.
Posted by Colin Talcroft at 4:38 PM No comments:

More rain overnight (accompanied by lightning and thunder) added 2.55 more inches to our total for the 2011-2012 rainy season, bringing us to 11.45 inches. The historical average for January 23 in Santa Rosa is 16.67 inches. Thus, while we've made up a lot with the nearly seven inches we've had in the past week, we are still 5.22 inches behind where we should be. Still, the vegetation looks fresh and alive in a way it hasn't for many weeks. Things are looking up.
Posted by Colin Talcroft at 3:44 PM No comments: 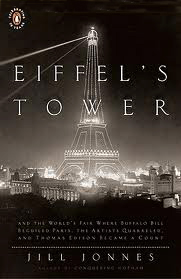 I found Jill Jonnes's Eiffel's Tower (Penguin Books, 2010) both a pleasure and a disappointment--but a disappointment that reflects my own misplaced expectations not any real fault in the book. I had imagined a more technical piece, something along the lines of David Mccullough's The Great Bridge, about the building of the Brooklyn Bridge. Eiffel's Tower is as much (or more) about the exposition the tower was built for than about the tower itself (with a strong emphasis on the doings of such people as Buffalo Bill Cody, Annie Oakley, Thomas Edison, Whistler, Gauguin, Van Gogh, James Gordon Bennett, publisher of The New York Herald, and, of course, Gustave Eiffel). There was very little about the actual tower in most of the second half of the book. I should have paid more attention to Jonnes's subtitle: The Thrilling Story Behind Paris's Beloved Monument and the Extraordinary World's Fair That Introduced It.

Having said all that, I very much enjoyed Jonnes's clear, well-paced narrative--I don't mind a good digression or two. I hadn't known that Buffalo Bill's show, complete with dozens of native American performers, had been in Paris during the 1889 Exposition Universelle, or what a sensation the show had been. (Annie Oakley was especially popular. Enamored of game hunting, the French aristocracy, in particular, admired anyone good with a gun). I hadn't realized that Eiffel had mostly been a builder of bridges before he designed his famous tower. His bridge works range from Europe to Vietnam to Chile and Peru. I hadn't known about the troubles caused by the lower level elevators, which seem to have stemmed mostly from repeated tweaking of the curvature of the tower's legs, each tweak necessitating an adjustment in the design of the elevators. 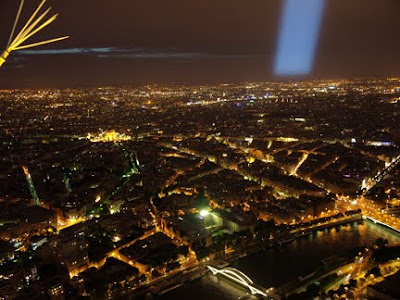 The elevators remain impressive today. My own first ascent of the tower remains most vividly in my mind because of the way the large cars travel along the legs, moving at a considerable angle off the vertical, a kind of motion not usually associated with elevators, and they move at a good clip, making a great deal of noise. Eiffel's insistence on elevators that ran along the legs of the tower was required by his desire to avoid having to use a central vertical shaft for the lift equipment, which would have ruined the effect created by the great open space between the four legs of the structure.

When I was an exchange student in Japan in the late 1970s, I remember going up to the top of Tokyo Tower, which is based on the Eiffel Tower but with just such a central elevator shaft. I found it amusing that the Japanese were so proud of their tower. At the upper viewing platform there was a large panel with statistics comparing Tokyo Tower with the Eiffel Tower. The latter is 984 feet high and made of  about 7,300 tons of metal held together by 2.5 million rivets. It was completed by about 300 workmen in two years, two months, and five days, between 1887 and 1889. The Japanese version is 107 feet taller (at 1,091 feet). It was built by around 400 workers in about one year, five and a half months, completed on October 14, 1958. It weighs only about 4,000 tons--considerably less than the Eiffel Tower, despite being taller--and that has long been the principal Japanese claim to its superiority. What Tokyo Tower's boosters always seem to forget is that Eiffel and his team built their tower nearly 70 years earlier with no precedent to rely on, they did it using less technically advanced metals, and they achieved their results infinitely more elegantly. I've always thought Tokyo Tower rather ugly, precisely because of the central elevator shaft; there is no open space under Tokyo Tower to enjoy. It has none of the lightness of Eiffel's design. Still, it serves its purpose, mainly as a broadcasting tower, and it was surpassed as the tallest structure in Japan only recently, with the completion of the Tokyo Sky Tree.

Eiffel's Tower paints a wonderful picture of the Exposition, its centerpiece (the Tower), and of the world's reaction to these as France celebrated the 100th anniversary of its great revolution and sought to proclaim its technological prowess in an industrializing world. The book makes it clear just how strong the structure's spell on the world was--even before its completion--a spell that remains unbroken today. Although I had hoped for more about the technical aspects of the Eiffel Tower's construction, the panoramic view of life Jonnes gives us from the perspective of the Tower is ultimately engrossing. By the end of the book, which coincides with the end of the great exposition, I felt a twinge of melancholy, as if I had been at the Exposition, had witnessed its most compelling sights, and, with regret, watched its final closing. Recommended.
Posted by Colin Talcroft at 11:38 PM No comments: