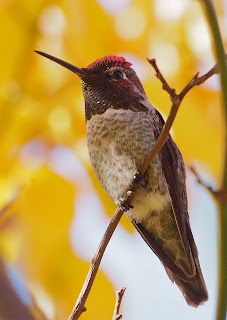 Anna's Hummingbirds are very common in Northern California. They come to garden flowers and often sit resting in low trees, making all manner of squeaky sounds that don't really sound like birdsong. They can be quite unconcerned by people at close quarters. Yesterday, this fellow posed for me about four feet away while I made a portrait of him against vivid yellow autumn leaves.

For more about birds and bird watching in Sonoma County, see my Website Sonoma County Bird Watching Spots.
Posted by Colin Talcroft at 9:57 AM No comments: 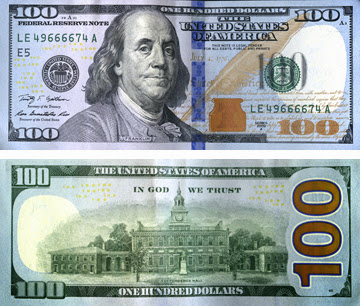 I was deeply disappointed by the new design of the $100 bill when images of it first began appearing on the Internet, but I thought I'd keep an open mind before judging it. I figured the real article might show better than the representations of it I was seeing on my computer screen, but now that I've handled the new $100 bill, I still think it's a design disaster. What were they thinking?

This new design is a veritable definition of the term "half-baked." Rather than start from scratch and design a new bill incorporating cutting-edge anti-counterfeiting technologies in an elegant way, the people in charge have simply allowed half of the old bill to be overlaid with some of these technologies. The mismatch is glaring. It's embarrassing.

The left side of the front of the bill looks mostly like the old design. The right side of the front looks new, but even the right side suggests a badly thought-out collage. The contrast between the two sides of the front face is hard to reconcile, and the purplish hologram stripe that separates them looks like a strip of tape sticking together two halves that don't go together. The reverse is just as bad. A large, yellow "100" has been slapped onto the old design in an awkwardly large hole that's been carved more or less out of the existing layout. The whole thing looks amateurish--or worse. No attempt has been made to make the range of common denominations ($1, $5, $10, $20, $50, and $100) complement one another. Each ought to be part of a coordinated suite of bills with some kind of design harmony. Instead, the new $100 bill makes it look as if no one cared one way or the other what our currency looks like. I give the new $100 bill a big thumbs down.
Posted by Colin Talcroft at 10:00 PM No comments: 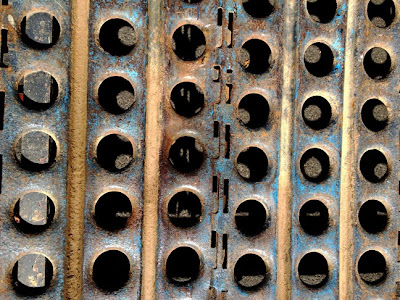 A trailer with holes in its bed. Parked on a street in Graton, California. I'm not sure what this vehicle is designed for, but the holes and their shadows on the street below looked like art to me. Found art. 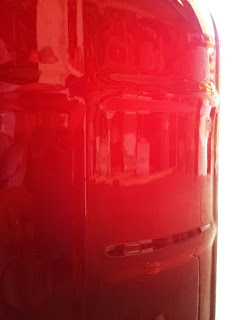 I racked and lightly sulfited the 2013 Sangiovese Rosé today, transferring five gallons of new wine to a new carboy of the same size, leaving behind a layer of yeasty sludge. I got a taste of the wine when starting the siphon and I'm very pleased with it. It's a nice deep pink. Although a little cloudy still, at this stage, it already looks pretty--as a rosé should. I sulfited the wine to about 52ppm (four Campden tablets in the five gallons of wine). If it clears quickly enough, we might be able to start enjoying some already at Thanksgiving, but it will probably have to wait until Christmas.
Posted by Colin Talcroft at 11:23 AM No comments: 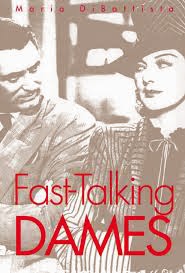 The fast-talking dame of 1930s and 1940s Hollywood was a uniquely American phenomenon argues author Maria Di Battista in her 2001 book Fast-Talking Dames (Yale University Press) and she notes that the fast-talking dame had passed from the screen by the early 1950s as the movie-land ideal of American womanhood shifted toward the dumb blonde--a shift away from sexually alluring but articulate woman that knew how to stand up for themselves toward a more passive, controlled type often admired for her sex appeal alone. Di Battista argues persuasively that it was an unfortunate shift. Her book is an affectionate tribute to the snappy, sassy stars of the earlier era.

The book gets off to a slow start. Its dense text requires more concentration to digest than I was expecting. It's a serious book of scholarly importance, not the quick read I had imagined before picking it up (based on no evidence). It was worth the work.

Di Battista's book seems valuable not only for its insights into Hollywood's attitudes toward gender roles in the golden age of the screwball comedy, but also for its looks at the careers of actresses such as Claudette Colbert, Jean Harlow, Ginger Rogers, Jean Arthur, Carole Lombard, and Myrna Loy (under the heading of "Hot Heiresses and Working Girls"); at the actresses she calls "The Grande Dames" (Katharine Hepburn, Irene Dunn, Greta Garbo, Barbara Stanwyck); and through detailed looks at a few of the most important films of the era--His Girl Friday, Bringing Up Baby, The Lady Eve, Ninotchka, and The Awful Truth. Along the way, there is much useful discussion of dozens of other films worth watching. Fast-talking Dames would be worth reading just for its indirect recommendations of good films from the period it covers. My one complaint is that there is no list of films mentioned in the text, which makes it tedious to find them once passed over. Halfway through, I started writing down titles that seemed worth seeking out. I've been visiting my local video store to rent quite a few I'd never seen. I've particularly enjoyed seeing Theodora Goes Wild, The Bombshell, If You Could Only Cook, and Wife Versus Secretary, among others. Recommended.
Posted by Colin Talcroft at 9:52 AM No comments:

I started malolactic fermentation today in the Cabernet Sauvignon/Cabernet Franc wine that's been fermenting in the living room. The alcoholic fermentation has mostly finished, so it's time to get the malolactic going. I added two 125ml packets of the Wyeast brand malolactic culture to my 8 gallons of new wine. As malolactic bacteria can be finicky, I've wrapped the carboys in blankets and inserted a small electric blanket between them, which is what I've always done, even though this Wyeast strain says it will remain active at a temperature as low as 55 degrees. In the winter months, the house temperature generally ranges from about 58 degrees to 68 degrees, but warmer will be better, I imagine. Malolactic fermentation can take anywhere from four to 12 weeks. After about six weeks, I'll test the wine to see how it's coming along.
Posted by Colin Talcroft at 6:23 PM No comments:

I continue to play with paper and paint, producing collages with acrylic-painted paper elements and fragments of monoprints on paper, again using acrylic paint to print with. I particularly like the colors made by Sennelier. In the past 10 days or so I've finished three more small pieces. The monoprint element is strong in these works. Endlessly fascinating. Shown here in the order I made them. The largest is the last one, about 7 inches on the long side.

Photos never capture the subtleties of the printed surfaces, but they're enough to get some idea of what the pieces look like. Clicking on the photos will enlarge them.


Posted by Colin Talcroft at 5:31 PM No comments: