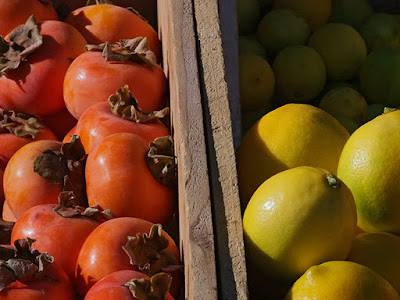 I visited the farmers' market at the Veteran's Building in Santa Rosa today, today being Saturday. I had thought it might be very busy with people in the area from out of town for the Thanksgiving Holiday, but it turned out to be fairly quiet. There was a lot of beautiful fruit on display and for sale. If the day after Thanksgiving is called "Black Friday," I wonder what the following Saturday should be called? "Black Saturday"? I imagine the stores were still busy with shoppers, but the market was the extent of my shopping for the holiday. 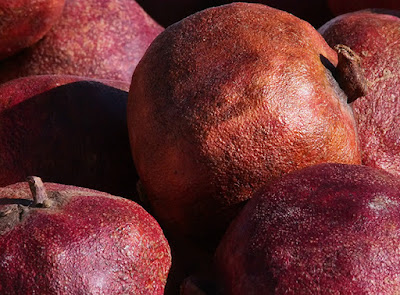 Posted by Colin Talcroft at 6:06 PM No comments: 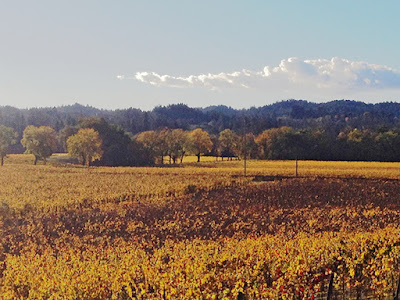 I took a drive through wine country today that ranged from Healdsburg in the north to Glen Ellen in the south. It was a beautiful autumn day. The vines are golden and red. The air was clear and cool. Autumn in wine country.
Posted by Colin Talcroft at 6:03 PM No comments: 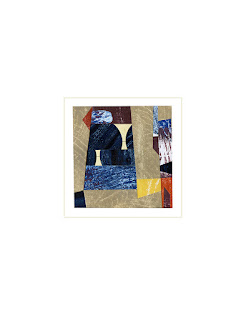 Someone once said a work of art is finished when it stops bothering you. There's some truth to that. Generally, when I finish a collage, I've come to that point--a point of satisfaction with a kind of dynamic stasis. When you can look at a piece and it's exciting but it doesn't ask for more, you know it's good and that it's finished. Sometimes, however, I call a piece finished and sign it when I'm almost satisfied. I may make this compromise because of mental fatigue. I will often try to convince myself such a piece is both finished and good while something inside quietly insists I'm wrong and that it's not time to give up and move on. I make that error from time to time.

Once in a while, although rarely, I look back on these pieces and discover that my doubts were unfounded. Sometimes a piece that bothered me a little will quickly appear different and settle comfortably into the category of finished work. A piece with real shortcomings continues to bother me, however, and eventually will annoy me deeply. Recently I decided to purge my collage work of two pieces that, in retrospect, were subpar. Before making any new work, I decided to rework the two pieces that disturbed my sleep. The results are pictured here. I've noted on the backs of the mats that the collages were completely reworked in November 2015. Little remains of the original images, but I've left the number sequence unchanged because the new versions have emerged from the original pieces.

The upper image is Untitled Collage No. 62 (Santa Rosa), originally "finished" in August 2014; acrylic monoprint, graphite, collage; image size 11.0 x 11.3cm, matted to 11 x 14 inches. Signed and dated on the reverse, signed on the mat. All that remains of the original is the partial indigo circles with graphite lines through the negative space between them. 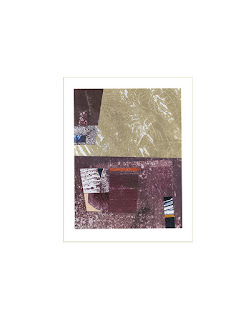 The lower image is Untitled Collage No. 97 (Santa Rosa), originally "finished" in April 2015; acrylic monoprint, found paper, collage; image size 12.1 x 15.8cm, matted to 16 x 20 inches. Signed and dated on the reverse, signed on the mat. Virtually nothing of the original remains here except the orange and deep blue strip at lower right, but, again, I've kept the number sequence intact for the reason noted above.

Click on the images for larger views. For more, visit my collage website at http://ctalcroft.wix.com/collage-site/.
Posted by Colin Talcroft at 11:58 AM No comments:

Light rains overnight left 0.1 inches in the rain gauge this morning. Not much, but every little bit helps the drought-stressed plants. That brings our total so far for the 2015-2016 rain year (calculated from October 1 2015 through September 30 2016) to 1.35 inches.
Posted by Colin Talcroft at 11:34 AM No comments: