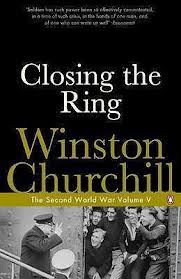 Closing the Ring, volume five of Winston Churchill's six-volume history of WWII, The Second World War, is the shortest of the six volumes, at about 640 pages, but it is as interesting as the preceding volumes. Closing the Ring takes the reader from June 1943 to June 1944--to the eve of "Overlord," the Normandy landings that opened a second major front in Europe. Perhaps the central event of the period was the shift of Italy from the Axis side of the conflict to the side of the Allies, with the successful invasion of Sicily and the overthrow of Mussolini. In the Pacific theater, Japan is no longer expanding but instead struggling to maintain control of the vast area her armies had conquered.

Much of the volume deals with the conferences among the allies at Quebec, Washington, and Tehran held to unify strategy, mostly centering on the ongoing preparations for the Normandy invasion. Sections dealing with actual fighting focus on the above-mentioned progress against Japan and events in Greece and Italy (mainly Anzio and Cassino), as well as the fighting around Imphal, in India.

Perhaps of greatest interest in this volume is the drama surrounding the British, US, and Soviet discussions about whether to stage a diversionary attack in the south of France (up the Rhone Valley) in conjunction with the Normandy invasion and the timing of such an attack. The southern invasion was conceived at the Tehran conference as a means of keeping German forces pinned down in the south and away from the struggle anticipated on the northern beaches of France as "Overloard" began. Churchill sees a stubborn US attachment to the southern invasion plan, known as "Anvil," at the expense of making further advances in Italy (and after conditions have changed) as a mistake in strategy (conditions were no longer what they had been at the time of the Tehran discussions--in particular, progress in Italy had been much slower than anticipated). Churchill believed also that the Rhone Valley was too far from Normandy to be an effective diversion anyway--better to press ahead in Italy while concentrating in France on "Overlord." In this volume, we begin to see growing American muscle overshadowing British contributions, and Churchill's frustration and annoyance at US influence are at times palpable--which is not to say that he is ungracious; he remains single-mindedly focused on winning the war by whatever means--but ultimately the US view prevailed over what Churchill saw as a superior plan. Closing the Ring, like the preceding volumes is well-written, detailed, and insightful, but I sensed Churchill's energy beginning to wane, and he paints with rather broader strokes here than in earlier volumes. Nevertheless, another worthy installment. On to the sixth and final volume....
Posted by Colin Talcroft at 6:12 PM No comments: 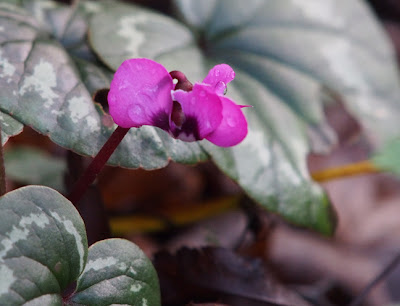 Recently I noticed a couple of plants in the garden blooming earlier than usual. First blooms on the dainty little cyclamen Cyclamen coum under the Japanese maple at the back of the house opened the day before yesterday (December 23). This is usually the first flower to bloom each year. Typically the earliest buds open in the first week of January. They bloomed on December 23 also in 2010 (which I counted as 2011), so this is not unprecedented, but on January 8 in 2009 and January 3 in 2010, so still earlier than usual (photo above). 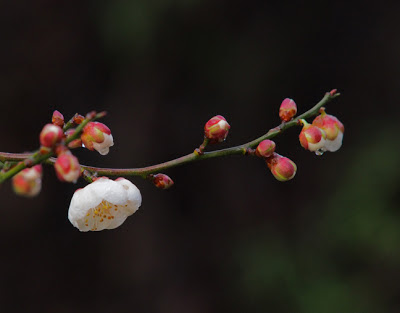 The white flowering plum (Prunus mume) began blooming on December 21 or so, which is considerably earlier than usual. This plant bloomed on January 4, 2011, January 19, 2010, and January 20, 2009. Perhaps early because of all the rain this year?

Posted by Colin Talcroft at 11:56 PM No comments: