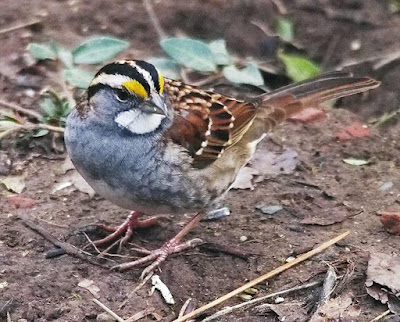 2019—First bird of the year: White-throated Sparrow (Zonotrichia albicollis). This portends good birding in 2019, I think, as White-throated Sparrow is a relatively uncommon species here. I saw one under the feeder this morning as I pulled up the blinds on the living room windows. I've started putting out seed again after a hiatus of a couple of years prompted by the presence of young cats in the neighborhood. I'm hoping for the best now (but will remain vigilant).
To all my birder friends: I wish you a bountiful 2019 with many exotic, rare birds among the regulars.
Posted by Colin Talcroft at 12:56 PM 1 comment: 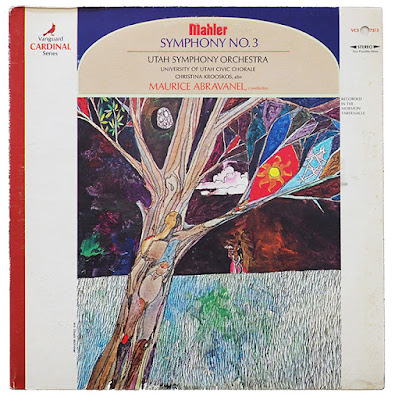 Ranking the Mahler symphonies: The Third is far and away my favorite. Followed by the Sixth, the First, The Fifth, the Fourth, and the Ninth, in that order, and then numbers 7, 8, and 2, although, I must admit that it's only the Second that I actually don't enjoy. The Seventh and Eighth I simply haven't listened to as much as some of the others.

My favorite recording of the Third remains the recording by Maurice Abravanel and the Utah Symphony Orchestra. I first discovered this recording, on LP (Vanguard Cardinal Series VCS10072/73, my copy pictured above), by chance in the cut-out bin of a record store in Columbus, Ohio back in the early 1980s, long before I had ever really listened to Mahler in earnest. I thought it sublimely beautiful, and still do. Years later, I was thrilled and relieved to find it re-released on CD, as I had feared I would wear out the grooves on the LP never able to replace it.


I can't imagine a finer performance of this piece, and the sound is ethereal. On a road trip across the United States, in 2009, in search of things beyond my grasp, atheist though I am, I stopped in Salt Lake City to pay homage to the Mormon Tabernacle because it's where this recording was made. The Tabernacle is manned by eager young Mormons who want to talk about God, I found. The young woman who approached me, visiting from Brazil, I think it was, didn't understand why I was there. Although the Tabernacle is an odd building--looking much like a tired roller skating rink or a hockey arena with a stage and chairs in it instead of ice, and with wooden columns painted to look like marble--it's magical for its sound.

The other Abravanel Mahler symphony recordings are very good, too, but this is a standout. In fact, if I had to pick a single recording from among the thousands that I own--of any music by any composer--to take with me to a desert island, I'd probably pick this.

Happy New Year to all my friends and acquaintances—whether Mahler excites you or not.
Posted by Colin Talcroft at 11:47 AM No comments: 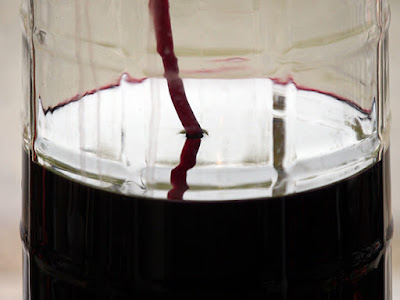 Belatedly I report that I spent most of Christmas Eve this year handling wine. I racked our 2018 Cabernet (six gallons) and our 2018 Sangiovese (four gallons) for the first time, assuming (although not confirming) that malolactic fermentation had gone to completion. I lightly sulfited the wine and would have added oak staves, but I had none on hand and it was a holiday. Today, writing on New Year's Eve, I still haven't added the oak, but will do so when the stores open again on January 2nd. So far, the wine seems sound and well on its way. 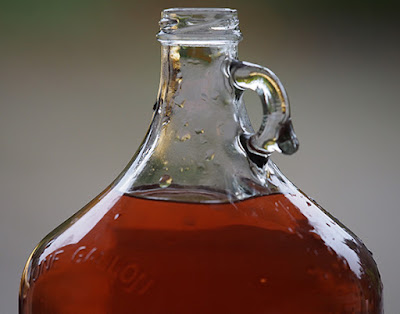 I also racked a gallon of rosé that I made from subpar grapes that I didn't want to leave sitting on the skins during fermentation. I decided to try to use this wine to make a sparkling wine (a first attempt). Having made sparkling cider several times before, it seemed easy enough, but I won't be able to riddle the bottles and clear the lees after the secondary fermentation in the bottle, so, while the wine will be sparkling, it will have a little yeast debris in the bottom, like a bottle-fermented beer rather than like a crystal clear Champagne. We'll see.

After racking, I bottled the wine and dosed it at 1.4oz of sugar/gallon for the in-bottle fermentation. The only complication was that I didn't realize that sparkling wine bottles are larger at the lip than the beer bottles I use for making cider. Thus, my crown caps and capper were the wrong size. I had to go to the supply store to buy larger caps and a larger fitting for my capping device. It didn't go very smoothly because the fitting kept separating from the capper, but I did get eventually get the bottles capped. They are now (presumably) undergoing secondary fermentation in the bottles.
Posted by Colin Talcroft at 12:43 AM No comments: