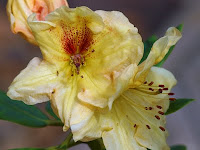 First blooms of 2011 on three plants in the garden yesterday and today. Yesterday the yellow rhododendron "Double Eagle" bloomed. In stark contrast to last year, there is only one flower cluster. Last year, the whole plant was covered in blooms. Rhododendrons are difficult.... 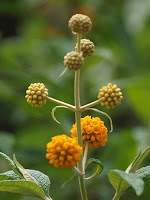 Today the first flowers opened on the butterfly bush called "Sungold," which has distinctive yellow-orange globes of flowers in alternating pairs. First blooms today also on the low-growing salvia with purple leaves that I believe is Salvia lyrata. I let these go to seed each year and we get new ones in unpredictable places around the garden. 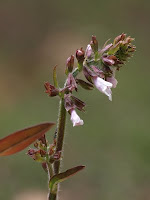 Rain overnight on the 20th gave the garden a much-needed drink. Despite the higher-than-usual rainfall this season, there had been no substantial rain in several weeks. The rain last night saves me using the drip irrigation system for another week or so. We got 0.6 inches, which brings our total for the 2010-2011 rainy season to 36.3 inches, more than four inches above the historical average. 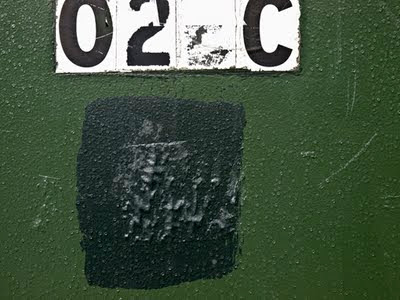 Walking along the Embarcadero not long ago I happened across this green panel with numbers on it. I don't know what they mean or why they were there. They seemed abandoned--they seemed to have a significance long forgotten, but they looked like art to me. Found art.

For more found art, see my blog Serendipitous Art.
Posted by Colin Talcroft at 7:19 AM No comments: 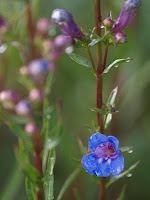 First blooms of 2011 on the pretty blue penstemon Penstemon heterophyllus and on the rose called "Cocktail." The penstemon is a variety I've seen blooming wild in northern California and Oregon by the roadside, but it has done very well in the garden here, despite (because of?) getting very little water or attention. The bright blue flowers have a beautiful, almost iridescent purplish sheen to them. Cocktail has been a reliable bloomer as well, with very cheerful bright red, single flowers with beige centers. I'm surprised to see that I don't seem to have records for either Penstemon heterophyllus or "Cocktail" in 2010 or 2009, so I can't say whether they've bloomed early or late this year. In any case, they're pretty.
Posted by Colin Talcroft at 10:36 PM No comments: 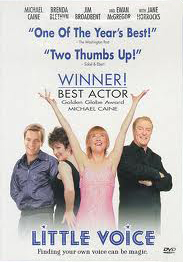 Our local Blockbuster Video shop shut down recently. I took advantage of the opportunity the closing afforded to pick up about a dozen films for only $2.99 each, as well as two seasons of Mad Men at a dollar a disk. Among the films I chose was Little Voice (1998, Directed by Mark Herman; starring Jane Horrocks, Michael Caine, Jim Broadbent, Brenda Blethyn, and Ewan McGregor), purely on the strength of Michael Caine's presence in the cast (I had not been aware of Horrocks before--most of her work appears to have been in television or--not surprisingly--doing voice characterizations).

I would call this a flawed gem. The writing struck me as weak in places: did Mari, the Brenda Blethyn character, have to be so unrelievedly loud and coarse? I think not. More importantly, the sudden nastiness of Michael Caine's character (down-and-out promoter Ray Say) toward Mari seemed out of character. He turns on her and needlessly humiliates her, saying, essentially, that she disgusts him physically. In the flow of the story, the scene is used to express his frustration when he begins to feel that Mari is an obstacle in the way of his efforts to exploit her daughter, the eponymous Little Voice, a pathologically shy girl that barely speaks yet has an extraordinary ability to mimic some of the more interesting female singers of the 1940s, '50s and '60s, including Judy Garland, Shirley Bassey, and Marilyn Monroe. Yet, Ray was happy to pick Mari up in the bar where he meets her and enjoy his time with her before he knew anything about the woman's extraordinary singing daughter--in other words, before he had any motive to pretend to be interested. Clearly he was attracted to her before Little Voice (or LV as she's known) becomes an issue. In contrast to this bit of nastiness, he is quite tender with LV (although he has a strong motive here, he seems genuinely to care about her). Is he really so two-faced? Is he really so unfeeling? Perhaps, but something in the logic of the scene with Mari seemed deficient.

Having said that, Jim Broadent is brilliant as the club owner, Ewan McGregor delivers a solid performance, and Jane Horrocks is simply phenomenal. It's really hard to believe she's not lip-synching, but apparently she isn't. She actually can sing like Judy Garland, like Shirley Bassey, like Marilyn Monroe. While the attachment of the shy LV to her dead father quickly becomes rather creepy, it's easy to ignore that and other problems for the sheer pleasure of hearing Horrocks sing. In other words, Little Voice works marvelously as a vehicle for her special talent. Not surprisingly, the film is an adaptation of a play of the same name originally written to showcase Horrocks and her singing. Recommended.
Posted by Colin Talcroft at 10:23 PM No comments:

It had been a long time since I'd seen either of the original films.  It's funny how memory works: I see now that much of what Young Frankenstein makes fun of (and what I remember about the original films) is in The Bride of Frankenstein, rather than the first film. I've always thought (and would still say) the later film is the better of the two (partly because sound technology advanced a great deal in the four years from 1931 to 1935), but both have held up rather well. Director Whale and Karloff succeed in making the monster a sympathetic character--as I'm surely not the first to note. It's no excuse to lament being brought into the world against one's will--each one of us is born into the world without a say in the matter--but the misunderstood creature is mercilessly goaded; it's easy to see both that he is done in by his own character faults and that he's not really to blame for what he does. Is it going too far to call the story Shakespearean? I've never read the original story by Mary Shelley. I think the time has come. Clearly, she captured something elemental, something that continues to fascinate after nearly 200 years (the story was first published in 1818).

Peter Ackroyd's entertaining retelling comes at events from a new perspective--that of Victor Frankenstein himself--and ends with a sharp twist on the final page of the book, a twist I won't spoil. In this retelling (The Casebook of Victor Frankenstein, by Peter Ackroyd, 2008, Anchor Books), Frankenstein forms a friendship with Percy Bysshe Shelley at Oxford that serves to spur his experiments in the reanimation of dead tissue, experiments that inevitably escalate into an obsession. We witness at first hand the birth of the creature, its escape, and the revenge it takes upon its creator and the people he cares for--all narrated in what seems a period-perfect voice, as if Frankenstein is reading from his casebook. The matter-of-fact report that takes us through the process of the creation is deliciously ghoulish and in places truly horrifying in a way that the films never capture. A fast-paced, page-turner with depth. This one's very likely to get your electrical fluids going. Recommended.

We watched the films not long before my last birthday. My mother kindly thought to get me this book as a birthday gift. The timing was perfect.
Posted by Colin Talcroft at 9:35 PM No comments: 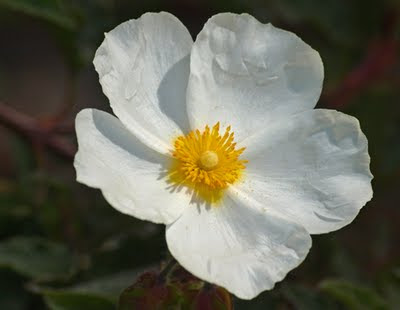 A heavy load of work this week has caused me to miss the first blooms of 2011 on a number of plants in the garden this year, but I note that the large white Cistus on the side of the house, by the lamppost, started blooming on April 15--yet another Cistus, or rock rose, that I've lost track of the name of. One of the first plants I planted here, it thrives with almost no water and blooms reliably. 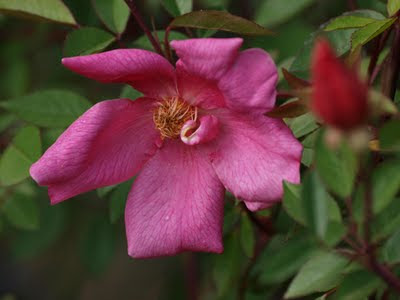 The blowsy multi-colored rose, also on the side of the house, began blooming around April 15 as well. Rosa chinensis mutabilis it's called. I like the name of this plant--as I may have remarked here before. It means "mutable Chinese rose" and the name is apt. The compact, neat buds begin a promising deep red, but the flowers open a medium purplish pink and then develop apricot centers as they quickly fade to pink and finally to a mottled pale beige. The flowers then fall apart and blow away. Perhaps this flower should be the symbol of romantic love, rather than the scarlet hybrid tea rose that has taken on that role. 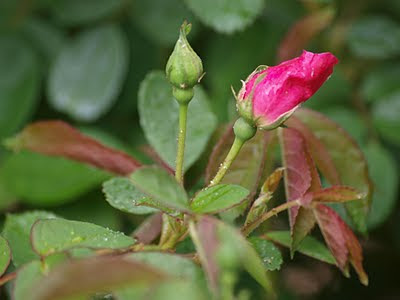 First blooms yesterday, April 17, on the deep pink rose by the side of the deck, a variety called "Nearly Wild." It's a very pretty single-petaled, old fashioned-looking rose that reminds me of the wild roses I remember from summers in England as a child. The buds are a deep, deep pink. The long-lasting flowers open to show a somewhat paler center with cheerful yellow stamens. Generally trouble free, although it occasionally needs a light spraying with neem oil to prevent mildew and against aphids. "Nearly Wild" bloomed on April 9 in 2010, so it has calculated a botanical year of 356 days.

The climbing rose "Altissimo" has also started to bloom in the past few days, but I missed the first bloom this year.
Posted by Colin Talcroft at 10:17 AM No comments:

It's drizzling this morning, but not really raining. It's more of a mist, actually. The rain gauge overnight showed 0.1 inches--not enough to give the plants much, but rain is in the forecast for the entire week. Now that everything has dried out following an unusually wet March, we could use a good downpour. The rain overnight brings the total at my house for the 2010-2011 rainy season to 35.7 inches. The historical annual average for Santa Rosa is 31.91 inches.
Posted by Colin Talcroft at 9:33 AM No comments: 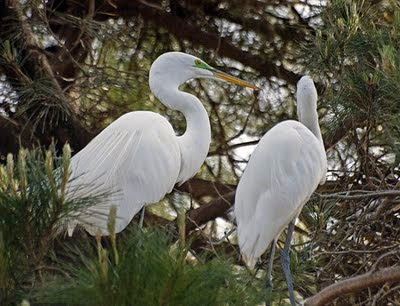 I visited the "Ninth St. Rookery" for the first time this season on the 15th. The "rookery" is nothing more than four or five large trees in the median strip on West Ninth St. in Santa Rosa used each year by Great Egrets, Snowy Egrets, Black-crowned Night Herons, and Cattle Egret as a nesting site. The place always has a surreal quality. The trees are filled with starkly white birds making the strangest of noises--saying things that sound like "wubba-wubba, wubba-wubba." Usually active between late March and June, it's good place to see these birds up close.

Yesterday, I took a walk around Spring Lake and had the unusual pleasure of seeing an American Bittern that stood still long enough to photograph (below). Usually these birds are so well camouflaged that you simply don't see them, or the moment they see you, they're gone with a loud squawk! amid a noisy flapping of wings. I hadn't been to Spring Lake in quite a while. There were orange-crowned warblers singing everywhere, and enough Spotted Towhees to compare the rather similar trills these two birds make (I always have trouble telling them apart). Some of the Golden-crowned Sparrows were in their full breeding plumage, sporting starkly black-gold-black heads. I also saw the Great Horned Owl nesting at the lake again this year. A good way to start the day--before heading home to sit at the computer to work all day. 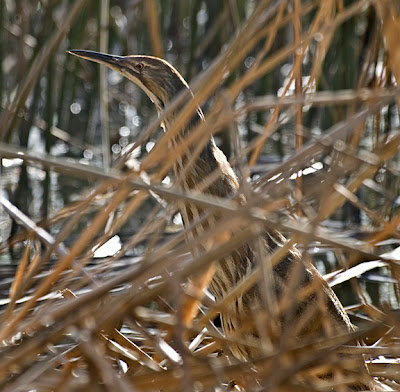 Posted by Colin Talcroft at 8:45 AM No comments: