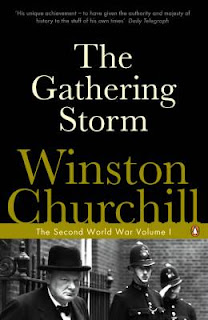 I've long wanted to read Churchill's six-volume history of WWII. I've finally made a start by reading the first volume, The Gathering Storm. The entire set was among the books left behind in my father's library. I probably won't immediately read the second volume, but I will get to it and the rest of the series sooner rather than later now.

In its early chapters, this first volume lays out in great detail the events that led to the Second World War in Europe, with Churchill giving much emphasis to the idea that the war could have been prevented entirely--at several junctures--if only the victorious nations of the First World War 20 years earlier had contained Germany by steadfastly forcing that country's adherence to military restrictions imposed by the Treaty of Versailles while giving Germany economic support--instead of doing the opposite: insisting on reparations and the enforcement of unreasonable economic punishments while ignoring German rearmament in clear violation of treaty provisions.

Churchill opens his book with the following heading: "How the English-speaking peoples through their unwisdom, carelessness, and good nature allowed the wicked to rearm." While it seems to me that the French, too, were culpable, Churchill's summary is typically succinct and accurate. Throughout the book, he reminds us that he vigorously pointed out the dangers of the developing situation and that his warnings and those of his political allies went largely unheeded. While the I-told-you-so remarks are frequent, Churchill makes a point of mentioning nothing that he had not stated publicly or in writing at the time, and history proved Churchill mostly right.

The second half of the book is devoted to what Churchill calls the "twilight war," often referred to as the "phony war" during which there was virtually no fighting on land--the period between Hitler's invasion of Poland (September 3, 1939) and the invasion of France. Most activity was on the high seas. The Scandinavian situation (and especially the Norwegian campaign) figures prominently. Churchill was closely involved in the latter, as he had returned to the position of First Lord of the Admiralty when Britain declared war on Germany, on the day Hitler invaded Poland (Churchill didn't become prime minister and minister of defense, with general responsibility for the war, including land forces, until the German attack on France in May 1940, which precipitated the resignation of Prime Minister Chamberlain). Churchill rightly saw at an early date that taking Narvik, in Norway, the main source of German iron ore for steel production, was critical, but scruples about violating Norwegian neutrality caused a disastrous delay in action. The volume closes with the failure to thwart Hitler in Norway and the change of the British government in 1940.

This first-person account in finely wrought prose by one of the leaders of the nations that fought WWII is valuable for its breadth and its depth of detail and for the inside view it gives of decision-making in London as the clash approached. The writing is crisp and clear throughout. Substantial appendices flesh out many aspects of the narrative in minute detail. While this book is hardly new (having been published first in 1948), it remains a unique personal account of the looming disaster of WWII. Campaigns in which the British were involved get disproportionate attention, and it's worth remembering that Churchill was a participant not a detached observer--that he was a politician not an historian. The series is perhaps better viewed as an extended memoir than as straight history, but it's fascinating reading nevertheless. Recommended.
Posted by Colin Talcroft at 1:00 PM No comments: