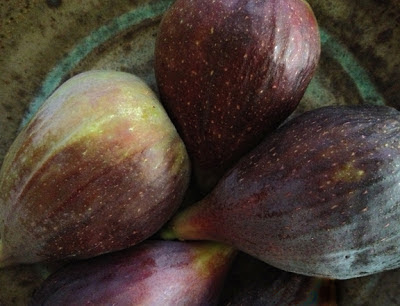 In the back yard, we have a fig tree, a variety called "Black Jack," which has dark figs rather like mission figs, but bigger. I chose this one because the tree stays small. It's been in the ground about seven years now, but it remains small enough that I can harvest the figs mostly without the use of a ladder. Normally, a few figs form in the spring. they usually stay small, shrivel and never ripen. The main crop comes late in the summer--usually sometime in August. For some reason, we've had viable early figs this year--not a lot (so far about ten)--but good-sized fruit that has ripened beautifully. I had six for breakfast this morning, doused with yogurt and honey. Fruit has set well this year on all the fruit trees, actually. We have pluots on the "Dapple Dandy" tree for the first time in many years. The "Flavor Queen" tree is groaning under the weight of all the fruit on it. About 200 Santa Rosa plums sit in the kitchen. I'm making jam from the bruised ones. We have apples and pears on the way, too. Perhaps it was because we had little rain while the trees were flowering this year? The grape vines have set a lot of fruit as well.
Posted by Colin Talcroft at 2:56 PM No comments: