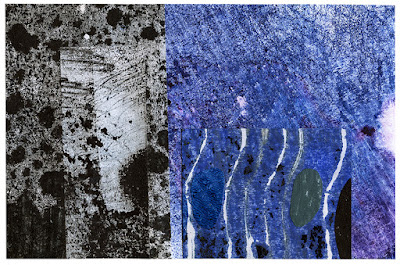 I say in the headline "recent collages" but I've come to a point where I feel like I've done with collage what I can do with collage. I know there are an infinite number of potential works that I might create, but I've lost the intense feeling of urgency about experimenting. This has been typical of me in the past. There was a period when photography was my obsession, a period of intense woodblock and other kinds of printmaking, a period of oil painting, most recently this phase of collage-making. The collage phase lasted almost five years--much longer than usual (although I've never really stopped photography since I began at the age of about eight). The printmaking phase lasted about two years, painting and drawing about the same. I guess I need to take breaks between periods of activity. At the moment, my attention is mostly on making cyanotypes, which, so far, have proved far more difficult than I anticipated. For the time being, though, I post here my three most recent collages. 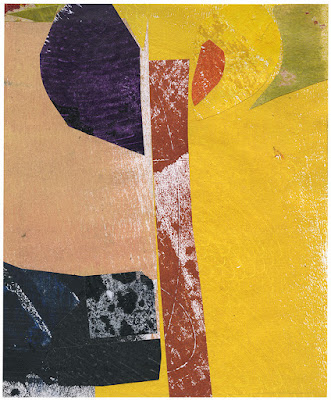 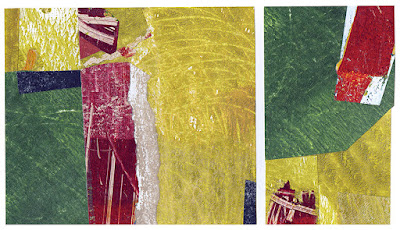 For further information, here is a link to a NY Times article on the subject. This article was originally published in February 2018 but has been updated online repeatedly. The last update was January 25, 2019, so it is current as of today.
Posted by Colin Talcroft at 9:46 AM No comments:

Music I'm Listening To: So Many Concerts

The last couple of months of 2018 were unusually busy months for me. I had art work in multiple shows. I was curating a new show on The Art Wall at Shige Sushi. I was more than usually busy with other work. I did three Audubon Christmas bird counts this year, leading a section of one of them. I attended a larger number of concerts than usual, concerts of both the San Francisco Symphony and the Santa Rosa Sympony. I've fallen far behind in mentioning them. That bothers me not so much because I think anyone will have missed my comments or photographs but because, by posting here, I keep a record that I can return to when trying to remember who I heard where and when.

Concerts I've failed to mention include an extraordinary performance of Ravel's Bolero, Friday October 19, 2018 in San Francisco with Pablo Heras-Casado conducting the San Francisco Symphony (I can't remember what else was on the program). Bolero is extremely familiar, but I'd never heard it live before, never seen it before. Visually, what was striking was the way the snare drum was positioned not at the back of the stage in the percussion section but right in the middle—in front of the woodwinds and just behind the violas. The snare drum sounds from beginning to end, without a break, establishing and maintaining the beat throughout. It is central to the piece in more than one sense. How hard it must be to keep it going flawlessly for the 15 minutes or so that Bolero lasts. It was an extraordinary performance—in its entirety, not just the percussion, although the snare drummer enjoyed a long and enthusiastic spell of applause.

And then there was Gauthier Capuçon and Jean-Yves Thibaudet in recital, also in San Francisco, on Sunday December 2, 2018. They played Debussy's Sonata No. 1 in D minor for Cello and Piano; Brahms' Sonata No. 1 in E minor for Cello and Piano; and Rachmaninoff's Cello Sonata in G minor, along with a number of encores, which, at this remove, I can't recall. Capuçon, as always, exuded confidence and a kind of strong but contained joy in playing. A joy to hear and to watch. Thibaudet was mostly hidden by the piano from my vantage point, but you could feel a presence nonetheless equal to that of Capuçon. Grabbing a bite to eat after the concert, my mother and I were surprised to see Capuçon, Thibaudet and their entourage come into the same restaurant about half an hour after we had arrived. Usually we eat at Absinthe after concerts, but the place closes early on Sundays. The only restaurant I could find a space at was Monsieur Benjamin, where the food was very tasty but boldly overpriced--particularly the wines by the glass. I resisted the temptation to intrude on the musicians, to say something, but it was fun to see them offstage.


The day before, December 1, I was backstage in Santa Rosa taking pictures for the symphony during a concert at The Green Music Center. On the program were the William Tell Overture (Rossini), Berlioz's Harold in Italy, and Vivaldi's Gloria. The concert was led by guest conductor Jayce Ogren. Nokuthula Ngwenyama was the viola soloist in Harold in Italy.

On January 12, in the new year, I was backstage again for a concert conducted by new music director Francesco Lecce-Chong. He led the Santa Rosa Symphony in a couple of short brass fanfares by Takemitsu, Mozart's Symphony No. 40 and Mahler's Symphony No. 4. Soprano Marie Plette was soloist in the Mahler.

Not to mention the Santa Rosa Symphony concert with Sharon Isbin on November 8, 2018 and also seeing Hilary Hahn in recital in San Francisco on the following day—two concerts I wrote about briefly here—or to mention the several art shows I saw in those months that I never got a chance to write about, notably the Muslim Fashions show, the René Magritte show, and the Pre-Raphaelites show, all in San Francisco.

Posted by Colin Talcroft at 11:24 AM No comments: 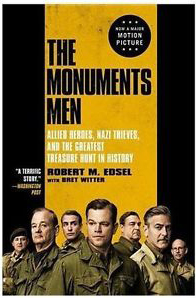 First book of the new year. The Monuments Men (2009, Little, Brown and Co.), by Robert M. Edsel, with Bret Witter, is the book from which the recent film was made. It tells the story of the German looting of art treasures in Europe during WWII. This is the same story told in Lynn H. Nicholas's 1994 book The Rape of Europa, but from the perspective of the men and women charged with finding, protecting, and repatriating the loot.

An extraordinary tale in many ways. First, it vividly demonstrates (yet again) the Nazi capacity for organized and meticulously documented criminal activity—activity condoned and encouraged from the very top. Extraordinary that treasures of the caliber of The Ghent Altarpiece were carted away and stowed in salt mines. Extraordinary that Hitler directed all of the looted art to be destroyed at the end of the war, when it had become clear that the war was lost. Extraordinary to think that, at the same time— almost until the day he killed himself—Hitler still had visions of a great museum in Linz where all the stolen art would go. Extraordinary that so few people on the Allied side accomplished so much with so little support from the governments they were serving. The writing is workmanlike, but the tale itself is well worth the time.
Posted by Colin Talcroft at 10:41 AM No comments:

Clear and sunny today for the first time in quite a while. It was still misting last night as I watched the lunar eclipse, obscured by clouds about half of the time. Now the clouds are all gone. There was 0.95 inches in the rain gauge this morning. That brings our total for the 2018-2019 rain year to 18.80 inches at my location in northeast Santa Rosa. Normal for January 21 in Santa Rosa is a little under 19 inches, so, we are right on track to see an average year of rainfall, as long as the rain doesn't suddenly stop. We'll see.
Posted by Colin Talcroft at 10:06 AM No comments: 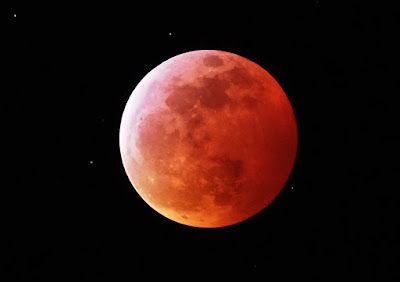 We got to see only about half of the eclipse tonight because of clouds and rain, but we got to enjoy the climax at least. Here's my best shot of the action. Shot with an Olympus OMD EM-1 Mark II and a 420mm-equivalent lens (80-300mm zoom lens at 300mm plus 1.4x teleconverter) at f4 for 1/3 of a second at ISO 6400. Camera on tripod, in-camera image stabilization off. Exposed using a remote shutter release. Anti-vibration setting not used. Recorded from Santa Rosa, CA at 9:20PM Pacific Standard Time.
Posted by Colin Talcroft at 10:52 PM No comments: