I attended a San Francisco Symphony concert last night. Michael Tilson Thomas conducted. I heard the Schubert Mass in G and the Berg Violin Concerto (I've always wondered why so many composers wrote just one violin concerto--I guess it feels obligatory even to composers that aren't really interested in the idea). Generally, I enjoyed the concert, but the Berg concerto is not one of my favorites. I mostly wanted to hear Gil Shaham play. He was very good--as you would expect--but in several sections I got the feeling that the conductor had lost perspective. The violin was almost completely hidden behind the orchestra in passages that seemed to me to require the soloist to be up front--but what do I know? 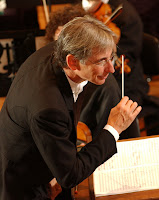 The Schubert mass was beautifully done, however. The chorus and the soloists were very good, I thought. MTT is a fairly acrobatic conductor, I see. I hadn't seen him live before. So far, all the concerts I've been to in SF have been with guest conductors or with James Gaffigan--whom I like very much. Frankly, I like him better than MTT.

Photos courtesy of The San Francisco Symphony
Posted by Colin Talcroft at 5:10 PM No comments: 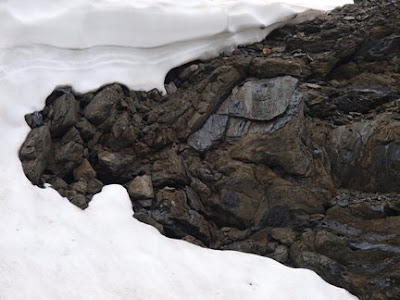 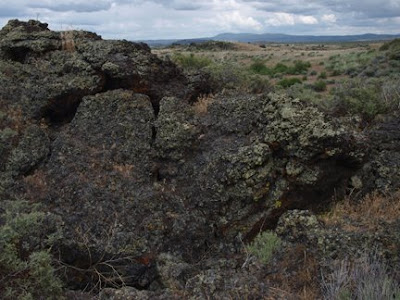 We moved on to the Lava Beds National Monument area, where the birding was markedly less interesting, although I saw nighthawks at Captain Jack’s Stronghold, the central defensive position of the Modocs during the Modoc Indian War (lower photo). I have wanted to see the site of this battle since reading Rebecca Solnit’s excellent book on Edweard Muybridge River of Shadows: Eadweard Muybridge and the Technological Wild West (Penguin, 2003) which talks about the Modoc Wars and Muybridge’s photographing of the site. The natural lava crenellations make it easy to see why the Modocs chose the area as a place for a last stand. Fabulous lichens in orange and lemon-lime adorn the craggy rocks. Later we toured some of the lava tube caves in the Monument area—Upper and Lower Sentinel, Mushpot, and Skull Cave.
Late in the day we headed for Glass Mountain, having got a tip from one of the rangers about a back way up the mountain that was not closed by snow. I hadn’t even considered snow before setting out, but we were initially told the road to Glass Mountain was closed. The back way turned out to be passable. The road was blocked by snow just before reaching a huge pile of obsidian and chaotically jumbled up welded ash rocks in colors ranging from oatmeal to burnt orange. We arrived, collected a few small pieces of obsidian and got back into the car just before a downpour began (upper photo--all the rock is obsidian, although you can't see the glassy effect well). Then we started the long trip to McCloud, where we had made hotel reservations. Because of the road closures, we had to backtrack for many miles. We finally arrived after 10:30. We had picked up Mexican take-out in Dorris. It was cheap and filling, but offered little more. We ate it in the hotel room in McCloud, washing it down with wine brought from home. I have no idea what's on the agenda for tomorrow.
The hotel in McCloud was nice--the McCloud River Mercantile--a restored 19th century "department store." The owner told me he bought the place about 10 years ago and just finished restoring it about two years ago. Going back to old photographs, the owners have made it look much the way it must have when it was one of the area's major emporiums. The rooms are big and well appointed. Breakfast at the little restaurant next door is included in the room price. The town of McCloud is rather more neat, clean, and sophisticated-looking than most of the little towns in the area. Nearby, visited the local waterfalls, got caught in a downpour, went to the local trout fish hatchery that has an interesting little museum and bookshop with a good selection of books about the area, and then had lunch and started the drive home.
Posted by Colin Talcroft at 7:24 AM No comments: 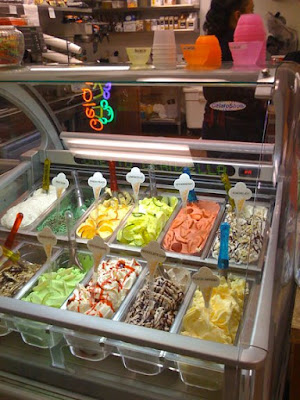 June 9, 2009. Not a bad day for birds. Saw a group of yellow-headed blackbirds in a swampy area along Highway 97, south of Macdoel--a first sighting for me. Rather striking birds. Large with bright yellow heads, black bodies, and white wing patches. Further along the road, saw a large magpie. Near Lower Klamath National Wildlife Refuge saw many birds in the water--mostly mallards--but also four white pelicans, a wren of some sort singing earnestly, clinging sideways to the reeds at the edge of the water, and later two pairs of pheasants along the roadway. Terns over the water as well. Hundreds of swallows nabbing the huge (I mean huge) mosquitoes. Oddly, these mosquitoes mostly ignored us when we got out of the car, unlike the giants I’ve encountered in Alaska that dive like Stukas the moment you open the car door.
Bad lunch. Bad dinner. The only good food moment was the gelato at Granzella’s, in Williams, CA. Skip the food. Go straight for the gelato. Tomorrow off to see Lava Beds National Monument. This area would be well worth a trip just for the birding.
Posted by Colin Talcroft at 9:41 AM No comments: 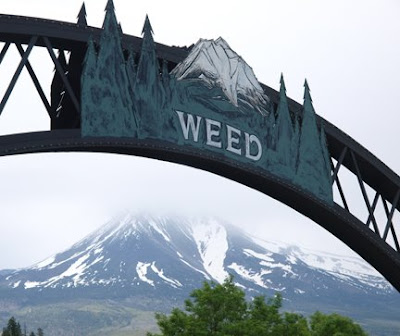 June 9, 2009. Drove north today from Santa Rosa on Highway 505 and then Highway 5, to Weed. Weed, California. Is that a good name for a town? There’s surely a story behind it, but I’ll let you decide. [I enquired: It's a person's name, so, I guess there's not much they can do about it.]

Didn’t see that much along the way, except for good views of Mt. Shasta. Did find two pretty blue-violet penstemons by the roadside--distinct species (See photos. I think the bluer one may be Penstemon heterophyllus). Sulfur buckwheat was blooming in profusion in one area. Found a nice chunk of pumice, along Highway 97. Later, along Highway 161, from 97, north of Dorris, east to the town of Tulelake, we passed the Lower Klamath National Wildlife Refuge, where we saw many birds.
Posted by Colin Talcroft at 9:39 AM No comments:

Email ThisBlogThis!Share to TwitterShare to FacebookShare to Pinterest
Labels: Mt. Shasta, On the Road, Weed

On the Road: Off to Glass Mountain

Heading north later today after work to the Oregon border, north of Mt. Shasta, to see Glass Mountain, a hill made entirely of obsidian.
Posted by Colin Talcroft at 8:26 AM No comments: