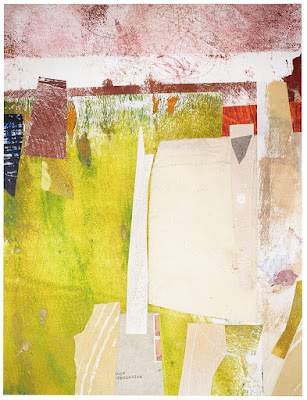 Just when I thought I had no more collages in me, I started making new monotypes yesterday and one thing led to another....

This one doesn't photograph well. The subtleties in the rice paper area get lost a little, but the image here is a reasonable facsimile. I think too often we forget that photographs of art, while they allow a general impression, are never a substitute for seeing the real thing.
Untitled Collage No. 212 (Santa Rosa), my first collage so far in 2019. Acrylic on paper, acrylic monotype, found paper (antique rice paper, found letter with fragments of stamps, handmade paper sample), collage. Image size: 28.0 x 37.5cm (11.0 x 14.8 inches). Signed on the mat. Signed and dated on the reverse.
For more, see my website at http://ctalcroft.wixsite.com/collage-site
Posted by Colin Talcroft at 11:38 AM 1 comment: 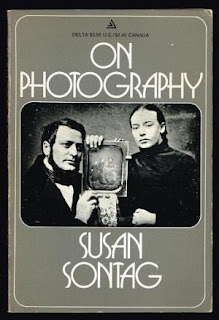 Having just read Susan Sontag's Against Interpretation and Other Essays, I felt inspired to finally read her collection called On Photography. I read an old Delta paperback edition (1978—apparently the first paperback edition) that I picked up used somewhere ages ago; although I thought I had a newer edition somewhere. No matter, the content is the same, although newer editions may have worthwhile ancillary material attached. It's a shame that Sontag didn't live long enough to add thoughts in the age of smartphones, Facebook, and Instagram.

This was much easier going than Against Interpretation—not because it is somehow lacking in depth, breadth, or rigor of thought—but simply because the subject matter is so much more familiar to me. I'm able to immediately see in my mind virtually all the images she mentions, none of which are shown in the text (I wonder if there's an illustrated edition?). I know the photographers she mentions. I know most of the history. But this is not about the history of photography or about the work of specific photographers except as useful for the purposes of supporting an argument.

The essays (six of them, although together they read as a single narrative) are mostly about the function of photography within human culture, and virtually every page has something worthwhile to say about the subject. Sontag talks about how photography relates to painting, to travel and tourism, about the way photography levels all events by transforming them into physical records, about ethical issues faced by documentary photographers and war correspondents, about the paradoxical way photographs can shock by exposing what is normally unseen while at the same time anesthetizing us to the shocking through repeated exposure, and about the way photography has come to shape the way we view and understand environments, both natural and man made.

Ultimately, she suggests that photography has usurped reality--that we have become more comfortable relating to images of the world than to the world itself. She was prescient. She had this insight when images were more pervasive than they'd ever been yet still far fewer and far more difficult to create than they are today. In 1977, making a photographic image usually involved film  sent out for processing. There was typically a lag of at least several hours--sometimes as long as a week--between composing a photograph and seeing it. Polaroid cameras were available, but even at the height of their popularity and availability, most images were not made with instant cameras (and a Polaroid image took several minutes to appear). Today, virtually any phone handset can produce an image in seconds and that image can be made visible to hundreds of millions of viewers just as quickly. What would Sontag have had to say?

[A few days later I found the more recent edition I was pretty sure I had (Picador, 1990). The text is identical to the text of the version I read. No illustrations have been added, and there is no additional content. ]
Posted by Colin Talcroft at 7:36 PM No comments:

Storms moving through the area yesterday and today have so far dropped 1.3 inches of new precipitation. That brings the total at my location in northwest Santa Rosa so far to 20.10 inches for the 2018-2019 rain year (which runs through October 31, 2019), about an inch below the historical average for the first week of February, but it's still raining....