Art I'm Looking At: Houghton Hall at The Legion of Honor

After seeing the Keith Haring show at the De young Museum, it took a moment to adjust to the very different mood of the Legion of Honor's show of work from Houghton Hall, in England, a large house originally built by Sir Robert Walpole, in 1776, generally considered a masterpiece of Palladian architecture. The show includes a large number of paintings from the Houghton Hall collection displayed along with furniture, dinner ware, silver, rugs, and other objects laid out in several large rooms. The walls have been covered from floor to ceiling with photographic reproductions of the original rooms, which give a fairly good sense of how the various object on display would look in context. 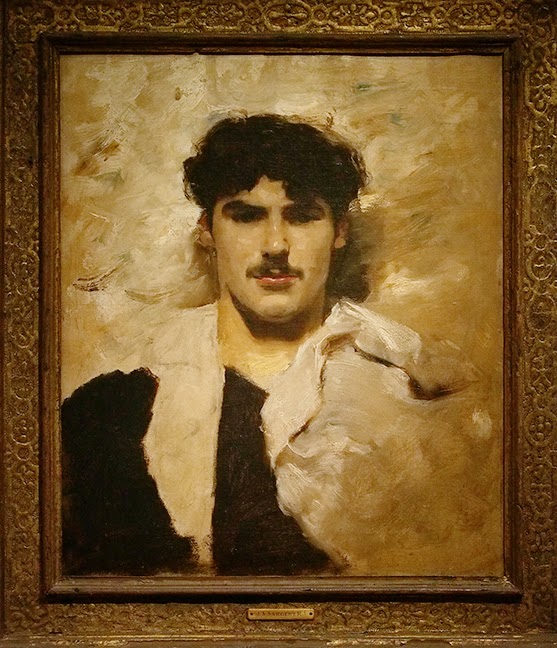 There's an entire room of Sargents--probably the highlight of the exhibition--paintings that rarely travel. They included a painting Sargent did to document World War I damage to a cathedral. His painting of gassed WWI soldiers is well known, but the captions in the Houghton Hall show suggest he was commissioned to do a lot of this type of work, which I hadn't known. There are a couple of full-length Sargent society portraits of note and several attractive charcoal portraits of Houghton Hall residents, but I especially enjoyed a quickly sketched head of a gondolier (c. 1878) from a visit to Venice (pictured). 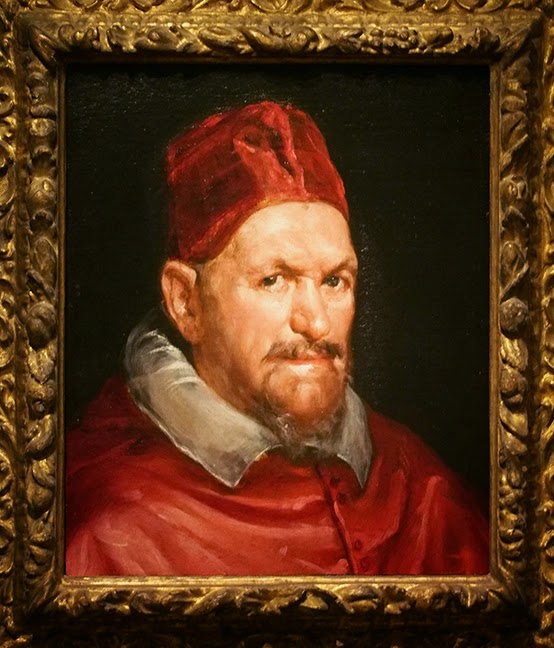 In the room with the Sargents, I was surprised to see a very familiar-looking head of Pope Innocent X, clearly related to the famous Velazquez portrait. Approaching a little closer, I read the label. The painting turned out to be a Velazquez study for the larger painting. 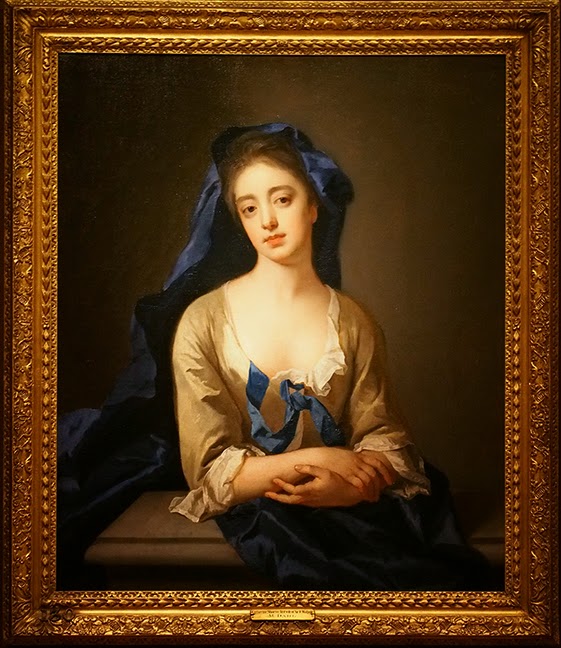 I also enjoyed a portrait of Catherine Shorter, Lady Walpole (c. 1710) by Swedish artist Michael Dahl. The wall tag mentions that she was extravagant--"frequently attending the opera and buying expensive clothes and jewelry," although she is fairly modestly attired in the portrait. The Dahl portrait is shown in a facsimile of the Houghton Hall library, with walls covered in faux books--large photographic wall coverings like the ones mentioned above. The room displays several pieces of furniture and an interesting wool rug described as English, but I noticed that triangles, apparently cut from the borders of oriental carpets, have been worked into its four corners.

Among the most beautiful objects in the entire show are two large rolls of handmade Chinese wallpapers (detail below). It wasn't exactly clear, but these appear to be actual leftovers from papers made for bedrooms in Houghton Hal, papers that presumably still cover the walls in some rooms today. The many birds on the papers are exquisitely drawn. The foliage, rocks, and other background elements are highly stylized, in some places becoming almost entirely abstract, while somehow retaining the power to evoke environments the birds might have been found in. The blue is especially striking. The show was worth seeing just for these wallpapers. The Houghton Hall exhibit runs through January 18, 2015 at the Legion of Honor. 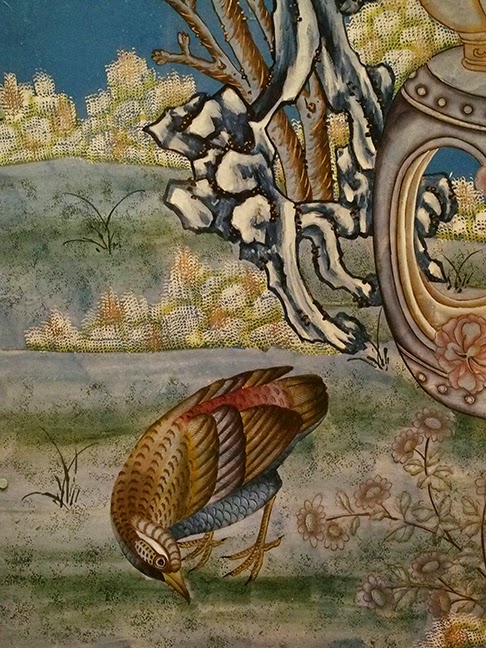 Posted by Colin Talcroft at 8:56 PM No comments: 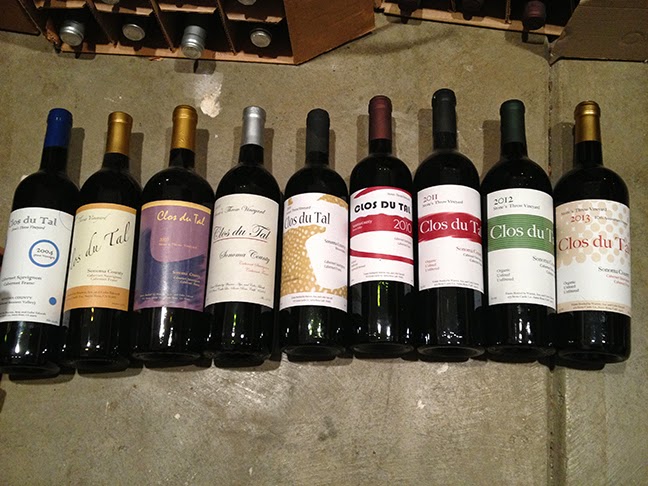 I lined up a bottle from each of our ten vintages--2004 to 20013--the other day and took a quick photo of them. If you're paying attention, you'll notice that there are actually only nine bottles--2005 is missing. That was the year the raccoons found the grapes before I had figured out how to effectively deter the critters (which involves nets and an electric fence). While I did make six bottles of wine that year from what the raccoons left behind, it was so bad I didn't bother making a label. I've designed a label for the wine each year in every other year.

Happily, all the other vintages have ranged from good to very good, with the 2007, 2008, 2009 and 2010 drinking best at the moment. The 2006 is beginning to feel a little tired. It's still too early to be certain, but my guess is that Clos du Tal will generally be at peak at 5-7 years old. I will, however, continue to keep bottles back from every vintage to see how they age. The 2014 wine is resting in carboys at the moment. Last week I bottled the most recent batch of hard cider I've made. The cider should be undergoing its in-bottle secondary fermentation. Next week I'll open one to see how it's coming along.
Posted by Colin Talcroft at 8:29 PM No comments:

Sad news over the weekend--news of the death of Gael Reed, long-time kindergarten teacher at Spring Creek Elementary School, in Santa Rosa, CA. Grateful that my child had her as a teacher. Grateful to have been able to call her a friend. Few teachers are as imaginative and giving, few teachers as filled with the kind of inner strength and beauty she had. Grateful to have known her. Heartbroken that she's gone, taken too soon, a victim of cancer. She is mourned and will be long remembered by the many who loved her.
Posted by Colin Talcroft at 11:03 PM No comments: