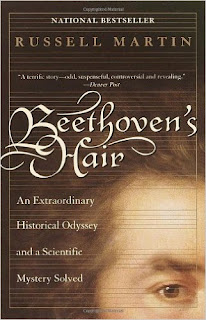 It's odd to think that a lock of Beethoven's hair made its way to San Jose, California in the 1990s. It's perhaps almost as odd that San Jose has a dedicated center of Beethoven research (at San Jose State University, where the lock—or most of it—rests today). Yet these are facts. Russel Martin's Beethoven's Hair: An Extraordinary Historical Odyssey and a Scientific Mystery Solved (Broadway Books, 2001) explains the journey from 19th century Vienna to California of an extraordinary relic: a lock of hair cut from Beethoven's corpse the day after the composer died—that is, on March 27, 1827.

The lock (apparently one of many taken from the body) was cut by a young musical prodigy, Ferdinand Hiller, who had been taken to see Beethoven on several occasions during the composer's last illness by Johann Hummel, Hiller's teacher and Beethoven's friend and fellow composer. The hair passed down through Hiller's family until the WWII years when it somehow got passed on to a doctor in the town of Gilleleje in Denmark, which became the scene of a remarkable effort to ferry Danish and other Jews out of the country (occupied by the Nazis) to safety in neutral Sweden—perhaps the most interesting part of the story Martin tells by switching back and forth between details of Beethoven's life and the fate of the lock containing Hiller's souvenir. Exactly how the hair passed into the hands of the Danish doctor remains a mystery—one the book ultimately fails fully to shed light on—, but the hair eventually came to auction at Sotheby's, in 1994, sold by the doctor's adoptive daughter for £3,600 to a group of Beethoven enthusiasts in the United States one of whom had amassed such a collection of early Beethoven scores that he persuaded San Jose State University to house his collection and build a research facility around it (the Ira F. Brilliant Center for Beethoven Studies).

The final chapters of the book center on the chemical analyses conducted on a sample from the lock and on the painful end of Beethoven's life, providing something of a climax the story of the lock's peregrinations lacks because of the big gap in the story leading up to and during the WWII years. Testing showed two important facts: first, that Beethoven apparently eschewed painkillers despite his ill health, presumably because he preferred to seek solace in his music rather than mask his pain at the price of lucidity; and second, that he appears to have had very high levels of lead in his system when he died–which may or may not account for his deafness. Tests failed to show the presence of mercury, which would have pointed to treatment for syphilis, one theory the investigations laid to rest.

An engrossing page-turner interesting in large part because of the way it shows how coincidence and a reverence for souvenirs of the famous can link people across continents and centuries. This appears to have been a bestseller when it was new--now almost 16 years ago.
SaveSaveSaveSave
Posted by Colin Talcroft at 10:02 PM No comments: 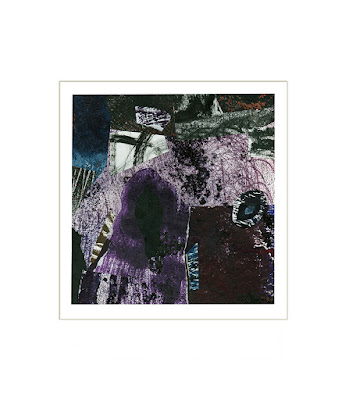 Playing with purple, I've created an unstable-looking pile of textures in that color. The shapes are vaguely suggestive of something. I can't decide what—but there's no need to discover a "subject" in this little composition. It is what it is.

Click on the image for a larger view. For more of my collage work, visit my collage site at http://ctalcroft.wix.com/collage-site. If you live in the San Francisco Bay Area, you can see my work in person during the Sonoma County Art Trails open studios event, always the middle two weeks of October--this year, October 8, 9 and October 15, 16. This year, I will be Studio No. 141.

OPENING RECEPTION for the preview show at The Sebastopol Center for the Arts is September 23, 6:00PM to 8:00PM. The preview show, which includes one piece of work from each of the 192 participating artists is on view now through the end of the event. For more information, go to http://sonomacountyarttrails.org.

Posted by Colin Talcroft at 4:41 PM No comments: