Had a fun time recently at Davies Symphony Hall hearing SF Symphony concertmaster Alexander Barantschik play Bach's Violin Concerto No. 1. Also on the program were Chaos, by Jean-Féry Rebel, and Haydn's Symphony No. 100 "The Military". Guest conductor Ton Koopman led the musicians with his usual always-smiling demeanor.
The Haydn symphony gets its nickname from a trumpet fanfare it includes and from a couple of entries by bass drum, cymbals, and triangle in imitation of Turkish Janissary bands, reflecting an influential fad in Vienna in the 1780s. On both entrances the percussionists marched in from somewhere offstage as if in a military parade, much to the surprise and delight of the audience. After the concert, on the way to an after-concert dinner, I found myself meeting Mr. Koopman himself on a street corner—like me, waiting for the lights to change. I imagine he was walking back to his hotel or a meal of his own. I told him how much I enjoyed the concert and said "Is that the normal way of doing that?" referring to the entry of the percussion section. He said "That's MY way of doing it!" with a big smile.
Rebel (1666-1747) is a composer I'd never heard of. Chaos was rather interesting and remarkably modern sounding, considering it was written in 1737 or 1738. The piece starts out, quite appropriately, with a chaotic "chord" that the composer describes by saying "I have risked opening with all the notes sounding together, or rather, all the notes in an octave played as a single sound" to quote the quote in the program notes. That's the sort of thing I'd expect a 20th century composer to do....
I enjoyed the Bach violin concerto as well. This was the second time I'd heard Barantschik as a soloist, having heard him play the less-well known of the two Mendelssohn violin concertos a couple of years back at Green Music Center when the SF Symphony was doing concerts here in Sonoma County. All in all, a pleasant diversion.
Posted by Colin Talcroft at 4:26 PM No comments: 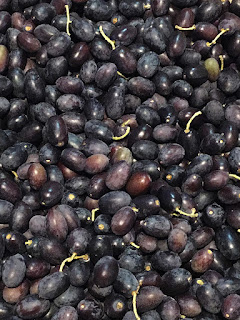 Olives! For the first time in several years I've been able to get my hands on some healthy, ripe olives for brining. It's a pretty easy process, although a bit tedious at the outset because you have to break the skin of each and every berry. That means scoring each olive with a knife blade before soaking them in brine. I use 1/4 cup of kosher salt to a quart of water and change the brine every two to three days. It takes about six weeks for the bitterness of the just-picked olives to disappear. Towards the end, I add vinegar, garlic, and rosemary to the brine to finish them off. These should be ready for Christmas. I started them on November 10.
Posted by Colin Talcroft at 4:23 PM No comments: