Miscellaneous: The 2nd Amendment is the Problem

The idea that guns should be controlled seems so obvious and logical to me that I find it difficult even to weigh the issue (it seems already clear, not requiring much thought), but the recent massacre in Oregon and the reaction to it among gun rights advocates set me to thinking about logical arguments supporting gun control. The automobile analogy makes most sense to me. The idea surely isn’t novel, but why isn’t it persuasive to gun rights advocates?

Have you ever asked yourself these questions? At first it all looks complicated. One question seems to lead to another and another. But one answer seems to apply to most of these questions: Cars can kill people, and, therefore, they should be regulated. All these arguments would seem to apply to guns. If we can regulate cars tightly, we should be able to regulate guns tightly.

Why isn’t that persuasive to gun rights advocates? Is my conclusion outrageous, outside the bounds of common sense?

We register autos because cars can kill people and we want to know who is responsible when a car is involved in causing property damage, an injury, or a fatality. We require a driver’s license so that people know the basics of operating a car safely—in the hope of avoiding property damage, injuries and fatalities—and to identify the operator. We require insurance because cars can kill people and we believe it just that victims of auto-related harm should be provided for and that victims of automobile fatalities and their families should be compensated. We require vehicles to be in good repair, because a poorly maintained vehicle can cause an accident and auto accidents kill people. We accept the risk, because cars are useful—for pleasure, for sport, for moving things and people from place to place—but we regulate cars tightly nevertheless. We require registration and insurance and we require these to be renewed annually. We require operator’s licenses that must be renewed periodically. We don’t give licenses to very young people or to people judged physically or mentally unable to handle an automobile. Because cars can kill people.

So why not guns—which are far more dangerous and, on the whole, much less useful?

Why not? Because, the gun lobby has persuaded too many people to believe that individual gun ownership is protected by the constitution. I believe that’s a mistaken interpretation, as many others do (and many deny, based on historically recent supreme court decisions that have destroyed the original intent of the Amendment). What’s clear is that the Amendment is confusingly worded. I think we need to amend the 2nd Amendment to say clearly what we believe it ought to say. The question is: What, as a nation, do we want it to say? If, as I believe, the Amendment’s intent was to limit federal interference in the maintenance of well-organized militias for local self defense (and only that), then the Amendment should say that. Guns in the hands of individuals in all other contexts then become like automobiles—just another potentially dangerous tool. If we can tightly regulate automobiles because automobiles can kill people, then surely we can do the same with guns. Let every gun operator be required to take training to obtain an operator’s license that must be renewed periodically. Let every gun in the nation be registered annually. Let every gun prominently display a unique identification plate. Let every gun owner carry insurance for each gun against its use in a criminal or accidental act that destroys property, maims, or takes a life. Let every gun owner be required to keep proof of adequate insurance with the gun at all times. Let all guns be required to undergo periodic safety inspections.

I would go further, arguing that some kinds of guns should be banned entirely, on the grounds that their potential danger far outweighs their potential utility. Just as most people don’t need potassium cyanide at home, most people don’t need an automatic assault weapon at home. If the 2nd Amendment is clarified, guns become easily controllable—like any other potentially dangerous tool. The NRA and its allies have been smart to focus on the supposed special constitutional protection of individual gun rights. The Amendment is the problem. We need to take back the 2nd Amendment by making it say unambiguously what it was originally meant to say—or, at the very least, to decide what, as a nation, we want it to say today.

And we hear about only the big ones--mass shootings, that is. Here's a link to a site that tracks mass shootings in the US (apparently defined as four or more people shot in a single incident). Mass Shooting Tracker.

[Update: A recent piece in The NewYorker argues, as I do, that the amendment does not guarantee individual gun rights (in fact, the author argues that the Amendment was designed to allow regulation of guns outside of an organized militia). He therefore believes the Amendment does not need to be amended. I continue to believe that clarifying it would be helpful.]

Posted by Colin Talcroft at 10:13 AM No comments:

Art I'm Looking At: Mark Eanes on The Art Wall at Shige Sushi 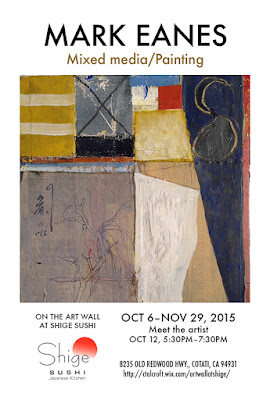 I'm looking forward to showing the work of Mark Eanes next on The Art Wall at Shige Sushi, in Cotati. The show will run from October 6 through November 29, 2015. The opening reception will be Monday, October 12. Click on the image here for a larger view. For more information about current and upcoming shows on The Art Wall, visit The Art Wall website at http://ctalcroft.wix.com/artwallatshige/
Posted by Colin Talcroft at 10:49 PM No comments: 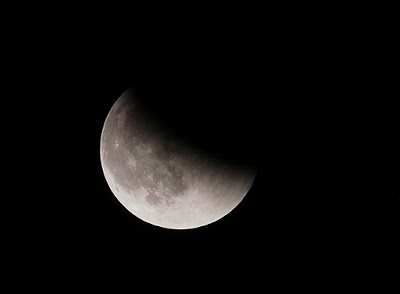 We were treated to a total eclipse of the moon today. Did you see the blood-orange red moon tonight? By the time I was able to photograph it, the color had gone....
Posted by Colin Talcroft at 9:38 PM No comments: