I attended the opening of the latest show at Ice House Gallery in Petaluma, "Birds" a show of art depicting birds--work by a diverse group of artists including Dick Cole, Sylvia Gonzalez, Diana Majumdar, Robert Poplack, Michele Rosett, Stephanie Sanchez, and Joanne Tepper.

Sylvia Gonzalez's work is attractive for its decorative qualities. She sketches birds on top of subtle, layered backgrounds created using a number of techniques, notably Xerox lithography. Some of her pieces are colorful arrays of smaller works. Diana Majumdar sketches very freely, but she nicely captures the kind of quizzical attitudes that often make birds so endearing, and she gets the birds right--which satisfies the bird watcher in me. Recognizable among her works in the show were Bushtits (Psaltriparus minimus, detail shown above) and a sparrow that I couldn't positively identify but one rendered in a way that makes me confident I could have done so with a field guide in hand--perhaps Five-striped Sparrow (Aimophila quinquestriata) or Black-throated Sparrow (Amphispiza bilineata). Dick Cole's work shows some nice painterly effects. Joanne Tepper's work is realistic--with an emphasis on draughtsmanship--but often whimsical at the same time. In her paintings she likes to pose real bird species on teacups, for instance (one such painting was on the cover of the 2014 Art Trails catalog). 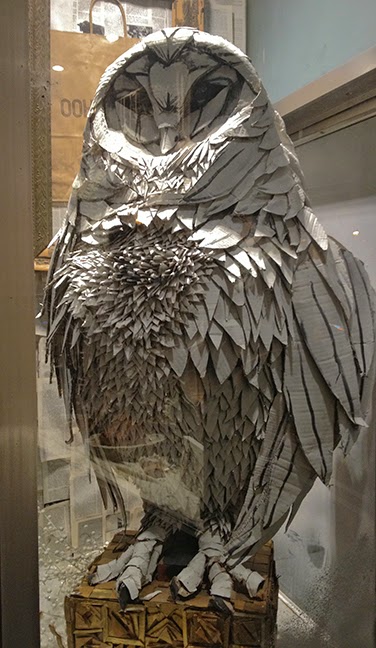 I spent about an hour walking around Petaluma after visiting Ice House Gallery and dropping in at Griffin Map Design & Gallery, a couple of doors down, where the Ladies Night show is still on. The most interesting bird art I saw during the evening may have been this 4-foot-high cardboard creation in a shop window along the main drag. I wonder who made this wonderful owl? If you're a bird lover and an art lover, however, my top recommendation would be to take the time to visit Erickson Fine Art Gallery in Healdsburg to see some of the wonderful bird paintings done on gold leaf by Antoinette Von Grone that Erickson shows. 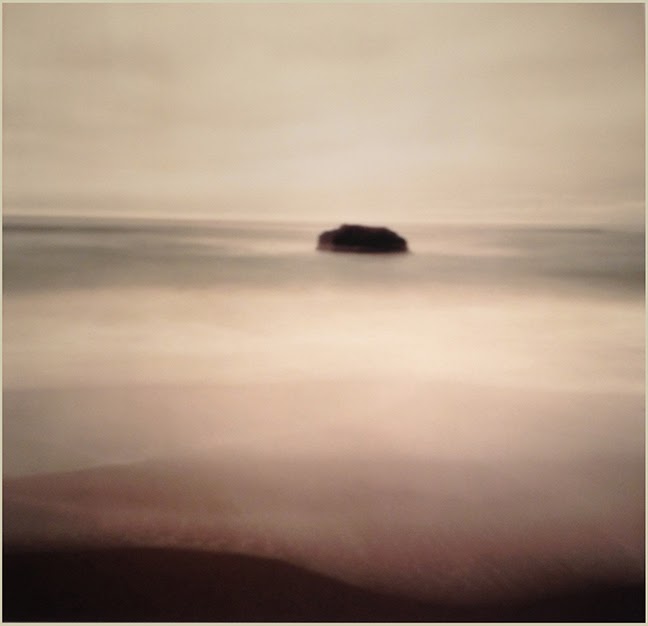 Later I stopped at Riverfront Gallery where an eye-catching photographic montage by Jeremy Joan Hewes depicting a crow or raven seemed the most interesting thing on the walls. Finally, I checked out Prince Gallery, which has a new show of photography up. I especially liked the work of one Laura Alice Watt. Her dreamy pinhole images struck a chord--beautiful, blurry corners of the natural world, not at all in the tradition of "nature photography"--but striking nevertheless. She says in her artist's statement that she rejects the perfection of much nature photography, saying "I am more interested in a direct connection with the world around me...attempting to see nature from the inside, via interaction, rather than simply admiring from afar." Compelling images.
Posted by Colin Talcroft at 8:39 PM No comments: 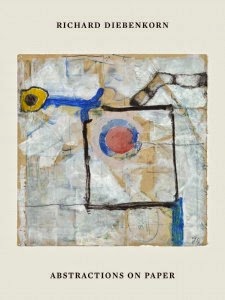 For my birthday I received a copy of Richard Diebenkorn: Abstractions on Paper, a comparatively new (July 2013) book about the work of Richard Diebenkorn (a gift I had asked for). I came across it quite by accident on the Internet. I can't remember what I was searching for, but I'm glad I found this diminutive (6 x 8-inch) volume, one of three about Diebenkorn published in the same format by a small California press I'd never heard of--Kelly’s Cove Press--in association with the Richard Diebenkorn foundation. I knew I wanted the book simply because I like Diebenkorn and because in the Diebenkorn retrospective at the De Young in the summer of 2013 works on paper were some of the more interesting and rarer pieces (click here for my review of that show). Now that I have the book in hand, I'm deeply impressed--and thrilled to see this is actually a catalog for a traveling show of these and other works on paper (many never before published) that will make a stop in Sonoma County this summer, at the Sonoma Valley Museum of Art, in the town of Sonoma, from June 6 through August 23, 2015. 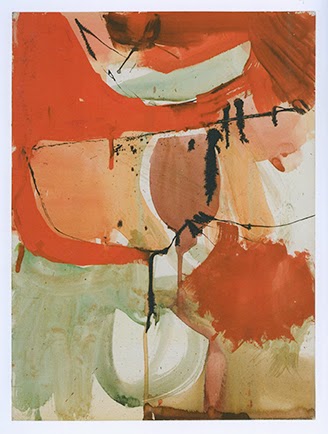 The book contains 88 full-color plates and a number of black and white views of Diebenkorn’s studio spaces. It covers nearly his entire career, starting in the late 1940s and early 1950s in Sausalito, Albuquerque, Urbana, and Berkeley, moving on to the Ocean Park period (1967-1988), and then to his late period (1988-1992), in Healdsburg. I had no idea he had retired and spent his final years so close by. I was in Healdsburg today. There is little text and almost all of it is at the end of the book. There are no essays, only descriptions (titles, dates, dimensions, media, etc.) and these are presented in a block following the images rather than alongside them, so that each page of the book presents a single image with no distractions. Besides the descriptions there are only: a page of credits identifying the seven short quotes interspersed among the images on otherwise blank pages; a brief (five-paragraph) biography; and the end matter. It's a pleasure to flip slowly through the main section of the book, getting a new gem with every new page. 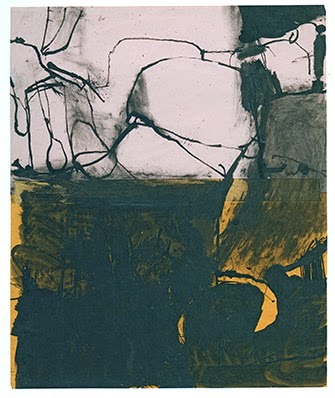 The quotes are wonderful. Diebenkorn appears to have been a man of few words, having given only a handful of interviews over the years, as far as I can tell, but what he says always resonates--although perhaps his words are especially meaningful to a working artist. I don't want to spoil the fun, but two quotes I liked in particular. "One wants to see the artifice of the thing as well as the subject," said Diebenkorn (this from Contemporary Bay Area Figurative Painting, Paul Mills, ed., Oakland Art Museum, 1957). It was probably uttered in response to a question about his figurative work, which in Diebenkorn's case blossomed after an extended, highly productive period of pure abstraction, but it's a sentiment that bears repeating today in the context of an art world bamboozled by art that has become so divorced from the human hand that it barely supports the descriptor "art" any longer. Yes, indeed. One wants to see the artifice.

The other I liked was "There's nothing I cannot paint over." That made me laugh out loud. Here I suspect Diebenkorn is talking about the courage and clarity of vision it requires to see that nothing is sacred, despite that feeling we artists sometimes get that a particular effect, some combination of colors, some juxtaposition of lines is perfect and inviolable--although it's almost never the case that such details can't be improved upon, set aside, painted over, left behind during the process of achieving something better. A beautiful little book.

The book has been produced in association with a traveling exhibition entitled The Intimate Diebenkorn: Works on Paper 1949-1992. The exhibition began its tour at the College of Marin Fine Arts Gallery, in Kentfield, moved to San Jose State University and then to American University in Washington DC. It will next appear at the Sonoma Valley Museum of Art, as noted above. The show ends at The University of Montana, in Missoula, on view there from September 24 to December 12, 2015. In conjunction with the same show, Kelly's Cove Press has also published Richard Diebenkorn: From the Model and Richard Diebenkorn: Still Lifes and Landscapes. The books retail for $20 each.

Posted by Colin Talcroft at 7:24 PM No comments: