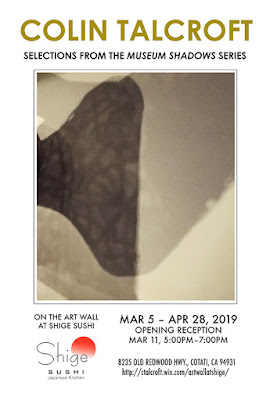 On The Art Wall at Shige Sushi: Colin Talcroft—Selections from the Museum Shadows Series
March 5 through April 28, 2019
Opening reception: Monday, March 11, 2019 5:00PM-7:00PM
Abstract photographs by me. The Art Wall at Shige Sushi presents selections from my Museum Shadows Series, an ongoing series of shadow photographs begun in 2012 captured in museums and galleries around the San Francisco Bay Area and in Europe.
On the Art Wall at Shige Sushi, 8235 Old Redwood Highway, Downtown Cotati, 94931.
Art viewable during regular business hours. Restaurant closed Mondays. More information at http://ctalcroft.wix.com/artwallatshige
Posted by Colin Talcroft at 10:12 AM No comments:

Looking at the rain gauge this morning, it was overflowing. I've never seen it completely filled before. The scale ends at five inches. I'm guessing there was another half inch above that, but I have no idea how long it was completely full and therefore not registering new precipitation. Suffice it to say that we've had at least 5.5 inches of new rain in the last couple of days. That brings our total to 32.60 inches at least at my location in Northern Santa Rosa, close to normal annual rainfall for the entire rain year (about 36 inches). Rain is in the forecast for the next seven to ten days. It seems very likely that this will be a wetter-than-average year. The Russian River and the Santa Rosa Laguna are already above flood level in places.

[Update: As of  noon on March 7, we've had another 2.4 inches of rain. That brings the total now to 35.00 inches for the current rain year at my location. More rain is forecast over the upcoming weekend and into early next week. Perhaps then we'll get a break. It would be nice to see a little sun again....]

[Another update: As of today, March 12, we've entered a dry spell. Nice to see the sun again. Between my last report and today we had another 0.75 inches of precipitation, bringing the total at my location to 33.35 inches so far this year.]
Posted by Colin Talcroft at 11:15 AM No comments:

Dr. Michael Guillen, in his book Five Equations that Changed the World (Hachette, 1995) succeeds in making five important equations easy to grasp and even entertaining to read about. None of the  equations he's chosen is especially difficult to understand, and the book might be faulted by some for trying to make things a little too approachable, but Guillen's writing only occasionally feels condescending.

The book is divided into five sections, one for each of the equations. Each essay is itself divided into five parts—a prologue that relates an incident in the life of the man at the center of the story (and they are all men) intended, as the author says, to "set the tone for what is to follow;" sections headed Vini, Vidi, and Vici; and an epilogue. The vini (I came) sections describe how the hero of the story recognizes the problem that his theory solves. The vidi (I saw) sections attempt to explain why the problem was important. The vici (I conquered) sections describe how the protagonist arrived at the equation that solved the central problem developed in each section.

The hero of the first essay is Sir Isaac Newton. The equation discussed is his Universal Law of Gravitation, written as

, where F stands for the gravitational force acting between two objects, m for mass (of the two objects in question), r for the distance between their centers of mass, and G for the gravitational constant, an example of an inverse square equation. The law was revolutionary in that it flew directly in the face of the idea that different rules applied to the earthly and heavenly realms. Guillen draws a direct line from Newton's realization that gravity acts the same way throughout the Universe to the landing of astronauts on the moon about 300 years later.

The second essay discusses Daniel Bernoulli's Law of Hydrodynamic Pressure, which deals with the pressure in a flow of liquid. It was Bernoulli's insight that as a fluid moves more quickly, its pressure declines and vice versa. While Bernoulli was concerned with liquids, airplanes (and birds) fly because the shape of an airfoil (whether natural or a man-made) causes air (in essence a very thin liquid) to flow more quickly over its curved upper surface than along its lower surface. Accompanying the speed differential is a pressure differential. Wings produce lift because the slower air flowing below them exerts more pressure than the faster air flowing over them.

The third essay tells the story of Michael Faraday's rise to prominence from humble beginnings and his Law of Electromagnetic Inductance, which Guillen writes as

. According to other sources that is actually a modified form of Faraday's original law, this version known as the Maxwell-Faraday Equation, and I noticed that in other instances the forms Guillen uses are not necessarily those most familiar to us (for example, he gives E = mc2 as E = m x c2). However stated, the core idea and Faraday's insight was that magnetism and electricity are two sides of the same coin—that electric currents produce magnetic fields and that, conversely, a changing magnetic field generates electric current in a conductor. Essentially, he recognized the principles behind dynamos and electric motors, and, once large reliable supplies of electricity became available, electric motors performed work far more efficiently than steam engines, important as steam engines had been. This essay dwells in some detail on the difficulties Faraday faced as a member of the lower classes (originally apprenticed as a book binder) in the English science establishment of his day dominated by wealthy gentleman scholars.

Rudolf Clausius, the subject of the fourth essay, is a less familiar figure than the others, but his Second Law of Thermodynamics is well known. Heat fascinated him. His breakthrough was understanding that cold things normally never become cold on their own, that natural temperature flows always go from warmer to colder—or, more formally stated: "heat always flows spontaneously from hotter to colder bodies, and never the reverse, unless external work is performed on the system" (from the Wikipedia article "Second Law of Thermodynamics"). By extension, he realized that energy changes and temperature changes were, again, two sides of one coin: they were changes in entropy.

The final essay, on Einstein's E = mc2 was particularly interesting, I thought, as it explained why Einstein started thinking along the lines that eventually led him to his conclusion about the interchangeability of energy and matter. According to Guillen, Einstein had understood that if you could travel as fast as sound waves emanating from a certain spot (only about 767mph) that you would cease to hear them because you would be moving away from their point of origin as quickly as they were; they would never reach you. Einstein apparently wanted to know what light would look like if you could travel at the speed of light away from a light source (almost 671 million mph, but more commonly given as 300,000m/sec). Ultimately, he concluded that the gravitational effects associated with travel at that speed would make it impossible to move so quickly and that light performs the feat because the photon is the only known particle believed to be pure energy and thus mass-less (and therefore not subject to gravity). Einstein decided that space and time are forced to change in such a way that the speed of light never changes—in short that space and time are mutable and everything, except light, is relative. An entertaining read if the history of science lights your lamp.
Posted by Colin Talcroft at 6:51 PM No comments: