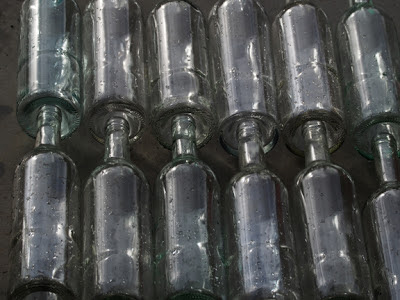 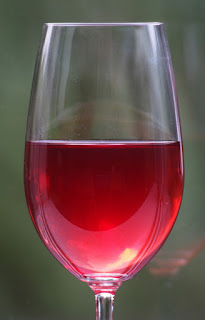 Didn't quite make it for Thanksgiving, as we sometimes do, but the 2012 rosé from our little backyard vineyard will be ready for Christmas this year--actually, well before; I bottled the wine today.

It appears to be excellent. Good color--a deep magenta pink--with a soft, fruity nose, crispness on the palate and with a solid core of fruit behind the acidity. Delicious. Made only 15 bottles, which is typical, as we have only nine Sangiovese vines, but that allows us to drink a bottle every few weeks, and it's very satisfying to drink wine from grapes you've grown yourself, crushed and fermented yourself, and bottled yourself. Now it's time to design a new label. Posted by Colin Talcroft at 5:15 PM No comments: 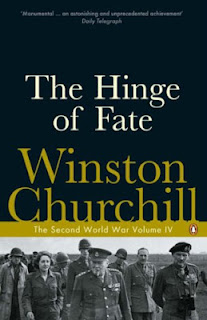 The Hinge of Fate is the fourth volume in Winston Churchill's six-volume history of WWII The Second World War. It is much the fattest of the six volumes, at over 900 pages including the detailed appendices. This volume covers Japan's early victories, and, in the Mediterranean, the long string of defeats the allies suffered in North Africa. As in the preceding volumes, Churchill speaks in the first person and, naturally, from the perspective of the British experience. He again relies heavily on "directives, telegrams, and minutes upon the daily conduct of the war and of British affairs"--documents written by Churchill himself during the conflict, and on replies and responses to the many telegrams and reports he authored during the conflict. These are supplemented by the author's retrospective analysis. He again writes in minute detail and neglects no sphere of activity, even including a chapter on the situation in Madagascar. Madagascar is not a country I'd ever thought of as being involved in WWII, but I was wrong. A considerable amount of the writing involves political developments in England and there is a great deal of material that illuminates the personal characters of President Roosevelt and Stalin through Churchill's dealings with these men. It is particularly interesting to watch the development of Churchill's impatience with what he sees as Roosevelt's exaggerated opinion of the importance of the Chinese and with Roosevelt's somewhat naive approach to dealing with Stalin.

It's only at the very end of this long book that much hopeful news emerges. The allies finally stop the German advance in the deserts of North Africa at Alamein, and the US begins to have some success against the Japanese in the Pacific. Churchill says about the victory at Alamein that it will survive as "a glorious page in British military annals" because of the long odds against success the allied armies faced, but also because "it marked the turning of 'the hinge of fate.'" "It may almost be said," Churchill writes, "Before Alamein we never had a victory. After Alamein we never had a defeat." Hence the title.

Books about war often dwell on details of clashes of arms, creating the false impression that wars are won exclusively on the battlefield. Churchill sketches battles only broadly, while focusing as much or more on the decision-making behind strategy, on politics behind the scenes, and on such mundane issues as supply and logistics and how they affected planning and the outcomes of the physical struggles we normally think of as the activity of war. I felt a little overwhelmed by the end of The Hinge of Fate. In places it even felt a little tedious. However, while Churchill's insistence on covering all of his activity during the war can be challenging, it ultimately has the positive effect of bringing home very clearly just how important the details are, particularly getting supply and logistics right, and in Volume V, there will much more of this leading up to the invasion of Normandy, a project of unprecedented scale and one that involved a great deal of delicate diplomacy.
Posted by Colin Talcroft at 6:52 PM No comments:

A series of storms has been moving through Northern California in the past couple of days. We've had 1.4 inches of rain so far yesterday and today. The wind has been sporadically fierce. The new precipitation brings our total for the 2012/2013 rainy season to 6.95 inches, which is a little above normal for this time of year (6.76 inches by November 29). Average annual rainfall in Santa Rosa is 36.28 inches. The "rain year" goes from July 1 to June 30 of the following year.

[Update: Still raining and pouring rather spectacularly at times. So far, as of noon on November 30, we've had another 3.3 inches of rain. The total--for the time being--stands at 10.25 inches, which is above normal for this date.]
Posted by Colin Talcroft at 5:07 PM No comments: