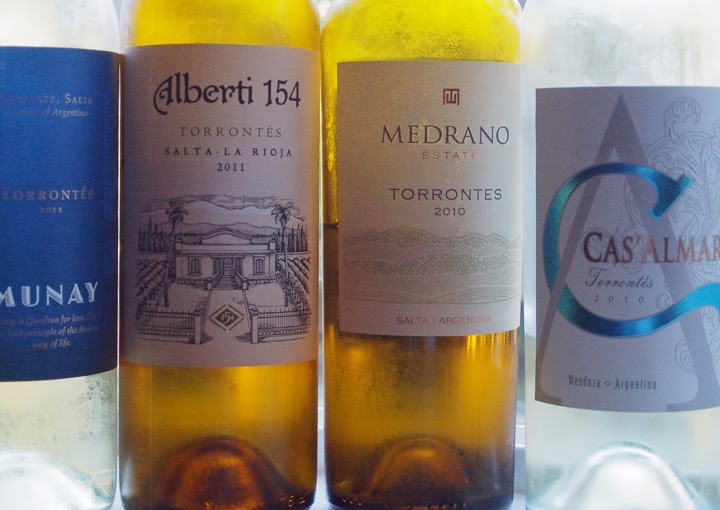 I've been aware of wines made from the Torrontés grape (grown mostly in Argentina) for some time, but I've tasted a number of particularly good ones lately, and my appreciation of this grape continues to grow. It's origins are thought to be in Galicia, in the northwest of Spain, where it's still cultivated in Ribeira (although an alternative theory says Torrontés vines were bred from seeds of Muscat of Alexandria brought to Argentina from Spain). Outside of Galicia, Torrontés is cultivated in Alicante and Yecla (both east of La Mancha, in central Spain). The grape is grown in small quantities in Chile (notably in the Pisco region, where it's called Torontel or Torontel Verdil) and also in Uruguay, but most and the best examples seem to come from northern Argentina. There are three varieties--Torrontés Riojana (named for the La Rioja region), Torrontés San Juanino (from the San Juan region), and Torrontés Mendocino (from Mendoza). This last is said to be rare and lacking the distinctive fragrance notable particularly in Torrontés Riojana. According to Hugh Johnson, Torrontés Riojana makes the finest wines, particularly in the high-altitude vineyards of Salta province. At their best, Torrontés wines combine a rich, slightly exotic fruitiness with crisp acidity--often reminiscent of the Albariño wines of Rias Baixas. They can be quite heady, like Viognier, while having the crispness of a good Sauvignon Blanc.

Torrontés clearly makes excellent wine when carefully handled. Often Torrontés wines are a bargain. Retail prices of the wines I tasted range from about $8 to $20, although I purchased all four at my local Grocery Outlet for $3.99-$5.99 a bottle--examples from recent vintages (2010 and 2011) from a number of different parts of Argentina. I tasted the wines blind. Brief tasting notes follow.

2010 Cas'Almare Mendoza Torrontés
This was the palest of the four wines I tasted--a very pale gold. Bright and attractive in the glass. Floral notes on the nose. Oak scents. Pear blossom. Hawthorne. Something sappy, but also with the kind of petroleum scents often associated with a good German Riesling. Overall, a nice perfumed quality to the nose. White peach. Subtle hints of muscat. Very attractive. Nicely balanced on the palate. Rich, fruity sweetness followed by a rush of good balancing acidity. Good "dance" of fruit and acid on the mid-palate. Nice, lingering, slightly tart finish. Has a little tannic bite to it. Interesting hint of bitterness on the very end. Really enjoyed this one. After tasting all four wines, I felt the Cas'Almare wine was distinctly a cut above the others, but I liked them all.

2010 Medrano Estate Torrontés
Medium Gold. Considerably more deeply colored than the Cas'Almare wine, although the Alberti 154 wine was a little deeper in color. Scents of honey and wood predominant on the nose, but with floral hints. Sandalwood perhaps? Somewhat more exotic florals than the first wine. Citrus hints, too. Later there was something that put me in mind of stewed tomatoes, which was not as odd as that may sound. On the palate, a little lighter in body than the first wine, but with an attractive, delicate richness. Lower in acid and therefore not as bright as the Cas'Almare wine, but nicely balanced. Moderate to good length. Something woody on the finish. Hard to describe, but nuanced and tasty. My second favorite of the bunch.

2011 Munay Cafayate Salta Torrontés
Pale straw color, but not as pale as the first wine. Scents of fresh vegetation, wood, and something spicy at first. Hints of white peach and something suggestive of pine resin. A complex medley of plant scents. Chrysanthemums, maybe? Honey or beeswax. Later, umeboshi (dried, pickled Japanese plums). Light on the palate. Less fruity than the first two wines. Very dry. Much more on the mineral side of things. Moderate length. Somewhat unfamiliar flavors. Slightly astringent. Less immediately appealing than some of the other wines in this group, but tasty, if not my favorite.

2011 Bodega Calle Alberti 154 Salta/La Rioja Torrontés
This wine is a blend of Torrontés grapes from the Salta and La Rioja regions. Deepest in color of the four wines. Medium gold. Citrus scents. Orange water. Honey, beeswax--reminiscent of a Costiere de Nîmes wine. Sandalwood or some other scented wood. Distant hint of muscat. Almonds. Gardenia. Gewürtraminer-like lychee scents. Softer, lower in acid than the other wines at first. Moderate length. Interesting resiny character to the finish. A little more tartness as the wine lingers on the tongue, but overall, seems a trifle austere. Has some tannic astringency. Tasty, but less distinctive than some of the other wines. Preferred this to the Munay wine, but all four of these wines seem worth trying.

I have no financial connection with the producer, importer, or retailer of the wine reviewed.

Posted by Colin Talcroft at 9:55 AM No comments: 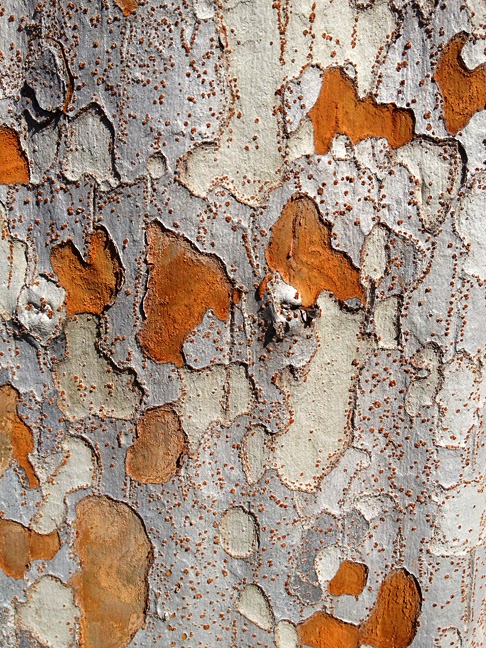 As today is St. Patrick's Day, I suppose I should have found something green to post, but I offer this pretty tree instead. I love the dull orange and off-white patterning--the irregular dark areas and the lines of little dots. Unintended art. Serendipitous art. I did snap this photo outside the Green Music Center--maybe that counts?

Posted by Colin Talcroft at 11:03 AM No comments: